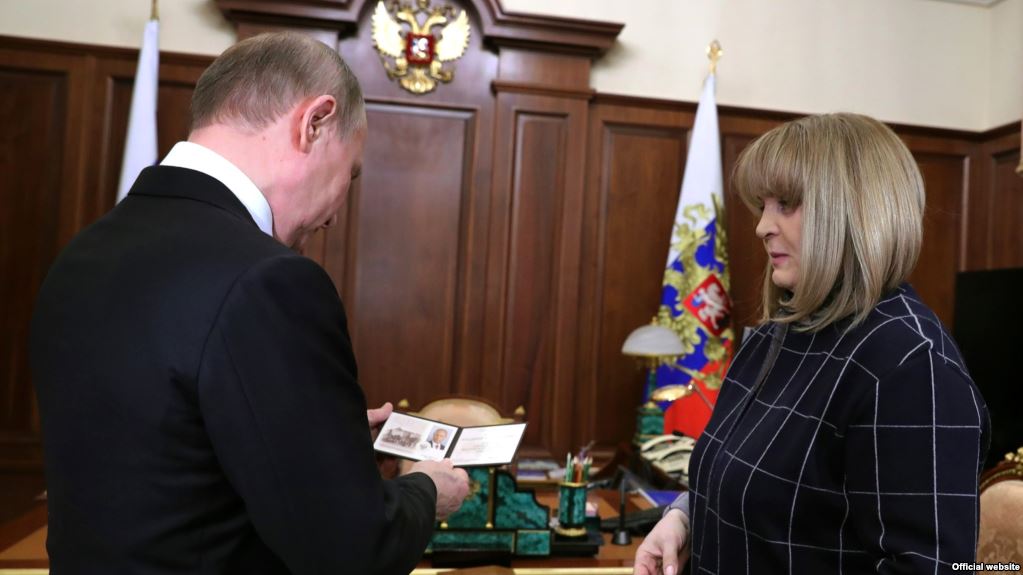 “As many already said, certainly, this was the most transparent and clean election in the history of our country.”

The March presidential election was “transparent” only in the sense that the results were predetermined; “clean” only in that genuine rivals were cleansed from the contest

In a Kremlin meeting on April 3, the chairwoman of Russia’s Central Election Committee, Ella Panfilova, presented Vladimir Putin with a certificate identifying him as the country’s president. In accepting the new presidential ID, Putin said last month’s election was “certainly the most transparent and clean election” in Russia’s history.

The main observer mission in Europe judged the 2018 Russian election to be anything but transparent and clean.

There have been six presidential elections in Russian history. Russia was a monarchy until 1917, after which it became a Communist autocracy that lasted for more than 70 years.

The post of president was established in Russia in 1991 after the dissolution of the Soviet Union. The Russian constitution approved in a 1993 referendum set the presidential term at four years. That was extended to six years in 2012.

The first Russian presidential election observed by international election monitors was in 1996, when Boris Yeltsin won his second and final term. Yeltsin had won his first term in 1991, when he was elected by the members of the country’s parliament, but there was no popular vote.

The Organization for Security and Co-operation in Europe in Europe (OSCE) observer mission for the 1996 Russian presidential election said there had been some violations, noting that “the imbalance of media coverage and of resources available to candidates, and the role of some parts of the Presidential administration during the campaign period, marred an otherwise effective and efficient electoral process.”

Still, OSCE observer mission concluded that, in general, the 1996 presidential election “was well managed and well run and the results accurately reflected the electors’ wishes on the day.”

On New Year’s Eve 1999, Yeltsin announced his immediate resignation and named Vladimir Putin as his successor and the country’s acting president.

A little over two months later, in March 2000, Vladimir Putin won his first presidential election. The OSCE observer mission to that election reported: “In general, and in spite of episodic events that sometimes tested the system’s capacity to uphold principles of fairness and a level playing field, the presidential election was conducted under a constitutional and legislative framework that is consistent with internationally recognized democratic standards.”

In March 2004, Vladimir Putin was reelected to a second presidential term. The OSCE observer mission reported that “the process overall did not adequately reflect principles necessary for a healthy democratic election. The election process failed to meet important commitments concerning treatment of candidates by the State-controlled media on a non-discriminatory basis, equal opportunities for all candidates and secrecy of the ballot.”

Since the 2004 election, Vladimir Putin has not participated in any public debates. The OSCE observer mission to the 2004 vote noted the abuse of what in Russia is known as “administrative resources” – meaning the use of government positions or connections to influence the vote — which would become instrumental in all elections that followed.

​“[T]he possibility for meaningful competition was undermined in a number of ways not attributable to recognized advantages of incumbency,” the OSCE said.

Given that the Russian constitution bars a president from serving more than two consecutive terms in office, in December 2007, at the end of his second term, Vladimir Putin announced that his long-time ally and prime minister, Dmitry Medvedev, was his “preferred successor.”

In March 2008 Medvedev won the presidential election with nearly 70 percent of vote, similar to Putin’s results in the 2004 election. The OSCE observer mission was not present for the 2008 vote. Medvedev appointed Putin as his prime minister, and it was widely believed that Putin, not Medvedev, remained the country’s real ruler.

​In November 2008, seven months after his election, Medvedev proposed extending the presidential term from four to six years, following his term in office. The Russian Duma and regional legislatures followed with their approval.

Still, during Medvedev’s four years as president, Russia experienced what many saw as a liberalization in both domestic and foreign policy.

However, near the end of his term, Medvedev announced he would not run for a second term and endorsed Putin’s to return to the Kremlin.

In 2012, Vladimir Putin won the presidency and began his third term. The OSCE’s observers reported massive violations in the 2012 vote.

“There was an evident mobilization of individuals and administrative resources in support of Mr. Putin’s campaign. Contrary to the legal requirements, the broadcast media did not provide balanced coverage of all candidates. Mr. Putin dominated the campaign in the media with frequent appearances,” the OSCE report said.

It also noted “procedural irregularities” and “lack of transparency” in the voting data entry and processing.

In 2012, Russia experienced countrywide mass anti-Putin protests before, during and after the presidential election. While the protests were largely allowed to be held uninterrupted before and during the election campaign, after the election, such protests were forcefully suppressed by security forces, and hundreds of people arrested.

Polygraph.info has examined the “clarity” and “transparency” of the 2018presidential election, in which Vladimir Putin has won his fourth term.

The OSCE mission reported, “The 18 March presidential election took place in an overly controlled legal and political environment marked by continued pressure on critical voices. Restrictions on the fundamental freedoms of assembly, association and expression, as well as on candidate registration, have limited the space for political engagement and resulted in a lack of genuine competition. The extensive and uncritical coverage of the incumbent as president in most media resulted in an uneven playing field.”