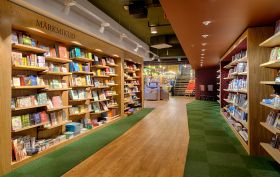 Representatives of the Ukrainian community of Estonia expressed their concerns in a letter to the managers of the Apollo and Rahva Raamat bookstore chains over the availability in both chains of a large number of propaganda books in Russian language that insult the dignity of the Ukrainian people and the honor of the Ukrainian state, instigate hostility against Ukrainians and Ukraine, justify the aggressive foreign policy of Russia and present incorrect information about the actions of bodies such as the European Union and NATO.

“The big number of such publications bears witness to this being intentional filling of the country’s Russian-language book market with literature of provocative nature, which is aimed at undermining stability within Estonia,” the letter by the Ukrainian organizations reads.

The managers of both bookstore chairs responded promptly and withdrew the Ukrainophobic books printed in Russia, the Estonian Congress of Ukrainians, leaders of other Ukrainian organizations and activists of the Ukrainian community told BNS on Wednesday.

Leaders and activists of the Ukrainian community of Estonia said in the letter that freedom of speech, just like freedom of expression in print media, cannot be a justification to flouting the nationalistic and patriotic feelings of another nation, to unconcealed and concealed heroization of wars of conquest and glorification of the “chosenness” of one nation at the cost of others. The creation and dissemination of printed media like this is part of a large-scale and comprehensive propaganda and psychological war waged by Russia, they say.

Considering that a military conflict is continuing in Ukraine which is supported by Russia, and the generally strained situation worldwide, the availability of books like this which insult the dignity of the Ukrainian people, instigate inter-ethnic hatred and destabilize the security situation in the country caused indignation among the Ukrainian community of Estonia, the letter says.