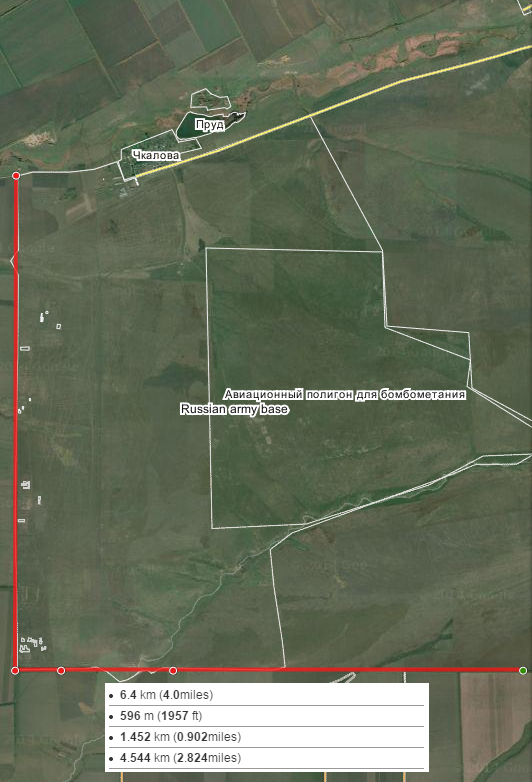 On January 6, @DajeyPetros spotted that the latest updated Google Earth satellite images revealed / included the base, many people knew about, but nobody could ever locate due to Russian army security measure to not leak meaningful footage of it and the lack of recent satellite footage from the area.

The Russian invasion, that started in April 2014 and continues to that very day includes hundreds of tanks, apcs, MLRS and other vehicles as well as thousands of shells, missiles and last but not least tens of thousands of Russian army personal as well as Russian army-trained “volunteers” or rather paid mercenaries / invasion troops. Such invasion can not be planned and organized from Moscow alone or via regular army bases, which are either too far away from the Ukrainian border or by far not large enough to handle the logistics necessary for such an operation. It needs (at least) one major logistical military hub. This hub was revealed by the latest Google Earth satellite image update.

The following article answers 5 questions, you should know about when talking about that base in particular and the sophistication and organized malice of the Russian policy towards Ukraine in general.

The base is located in a strategically brilliant position. 23 km north east of Taganrog and 30 km north west of Rostov-on-Don, it is in close range of several major Russian army hubs, including military bases, airports but also civilian supply structures for the daily life of the thousands of troops inside the base.

However, the major significance of the localization of the base appears, when we look at it in relation to the deployment zone in Ukraine. From the very south to the very north of the today mostly-occupied areas in Donbas, namely the centers ofMariupol, Donetsk and Luhansk, the distance is almost exactly 130 km, meaning an offensive- as well as quick reaction potential at all sectors of the front within the same period of time. At the same time, the base if 48km from the nearest Ukrainian border point, giving it a “safety distance” to possible counter attacks.

It is HUGE … The north-south expansion of the base is exactly 6.5 kilometers, so 4 miles. There are several concentrations of buildings, tents and vehicles all along that axis. The east-west expansion depends on what you regard as being a “military base”. In a width of 600 meters, we have the hard infrastructure of the base, again including buildings and vehicles plus positioned artillery pieces and much more (for more, read 4.). In a width of 2 kilometers, we can see extensive tracks, probably from intense training exercises and scattered current and former structures, which were used as forward positions and observation points. In its total width of 6.5 km, there are multiple craters visible, likely from artillery and tank shelling.

So in conclusion, we have a built up infrastructure area of 4 km², a vehicle training ground of 10 km² and a firing range of another 30 km². Adding all this to a coherent military installation, we find an area of some 40 km² which as an example is 4 times bigger than the airport of London Heathrow.

3. When was the base established?

The area in question was last scanned by available satellites in October 2013, so 4 months before the Russian invasion of Crimea started and half a year, before Donbas was for the first time attacked and occupied by Russian forces. At images from that time, nothing is to see that would indicate the soon emergence of a large military complex or only a new road or farm on the concerned field. One year later, a complex military installation exists at this large field. So given the fact, it would need at least 1-2 months to build the entire infrastructure (including fixed buildings), the date of the base formation could be in August 2014.

But there are hints, indicating an even earlier start of construction and use. Between the developed parts of the base, large areas with former formations can be seen. What happened to the units in these areas? They were either given up, moved to another – the current – October 2014 location OR – which is the most likely version – were completely deployed as invasion army battle groups to Ukraine. Three examples are given below. Again: Remember that all these major installations were built up and removed between October 2013 and October 2014.

Taking into account that it took also 1-2 months to build these developments and another few weeks to remove them once again, it must be concluded that the base was built up and used at least since June 2014, possibly even earlier. This would mean that all escalation, especially the one from late August, costing over 1000 Ukrainian troops their lives, was planned long before, showing that Russia had plans for a major escalation even before the Ukrainian army moved into the mostly unarmed separatist-held cities in early summer last year. It also shows that after annexing Crimea, Russia never planned to rethink its policies and lied all along, claiming it was finished with its expansionism inside Ukraine.

4. Which military hardware is inside the base?

In brief: All it needs to lead a war and all, we saw and see entering Ukraine from Russia.

There are several concentrations of Russian army vehicles of the same type all across the outlined base parameters. However, we are talking about commercially detailed satellite images, so there is it is possible for experts to identify the general model of a weapon system, but not to distinguish between different versions of it (like BTR-70 or BTR-80). Nonetheless, I have identified groups of KamAZ and Ural trucks, BMP-1/ BMP-2, BTR-70/BTR-80, MT-LB, MT-LBu, Msta-S and Msta-B, BM-21/27/30 and last but not least T-64/T-72. The following image is only one example of one battle group, being stationed at the base.

The next image seems extremely interesting as it shows several multy launch rocket systems, but also something, which looks like sophisticated air defense systems, possibly the SA-10 “Grumble”. However, this can not be said for sure as we are talking about satellite images with a maximum resolution of maybe 1 meter large objects.

Summarizing the vehicles and weapons systems at the front it can – once again – be excluded – that this is any kind of regular or defensive military installation. It houses – as I said before – battle groups, ready to be deployed as punchy forces in a neighboring country, leading to the last question.

5. What is the main purpose of the base?

While such question could (or even should) not be answered out of the blue, the first four points of this analytic article qualified it for an informed answer. Looking at the position, size, age and equipment of the base, only one conclusion is possible: This is the one base to rule them all. It was established and still is operated for one reason: To keep the invasion and ongoing occupation of neighboring Ukraine running.

Its current and former visiting forces suggest the assumption that it is BOTH a RF armed forces-led training ground for “voluntary”–> paid Russian invasion forces and the small number of real Ukrainian separatists where they can learn / refresh their driving and firing skills before going to war AND a “traditional”Russian army base, serving as a bridgehead for all major offensive operations and a backup- and retreat area for resupplies and reinforcements. Just today, the Ukrainian defense minister said that 7.500 Russian army troops are serving in Ukraine at the moment, being constantly rotated with their entire equipment. Now we know to / from where and that fresh battle groups are always waiting to be deployed.

All in all, the – at some point inevitable – revelation of this large key base is another reminder that Russia is not hiding its efforts in its war on Ukraine anymore and probably never did. It is also a reminder that the mainstream media and most Western – and Ukrainian! – politicians are painting an entirely wrong picture of the situation. We are not facing a “covert war”, nor have there ever been “Russian-backed rebels” in Ukraine. What we see since almost 11 months is an aggressive war by the Russian Federation vs. the sovereign state of Ukraine, with all organisation and logistics such war necessarily needs.