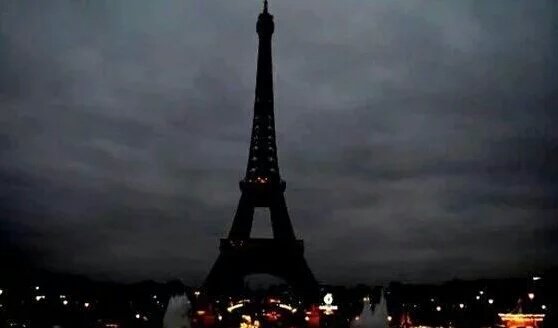 On the night of the Paris attacks, Rurik Bradbury noticed an inevitable and tiresome trend popping up on Twitter. “I think I saw a professional news organization tweet about the lights of the Eiffel Tower being turned off in memory of the victims,” recalled Bradbury, the New York-based CMO of a software company. In the fog of war, and in the pursuit of virality, someone had mistaken the Eiffel Tower’s ordinary 1 a.m. darkness for a moving tribute.

Bradbury fired up the Twitter account of his alter ego, @ProfJeffJarvis. He used the well-known parody account, which makes fun of tech jargon and media “thinkfluencers,” to write a deadpan tweet about the icon of Paris going dark.

It was a perfect imitation of the serious tone and hastily assembled expertise that was filling Twitter all night. And it became Bradbury/ProfJeff’s most popular tweet by many orders of magnitude. By Sunday, nearly 30,000 people had retweeted his utterly fake news, which he’d written to prove that people will fall for anything. “In general I am fascinated by the way history and fake history spreads on Twitter, such as the many ‘History in Pics’ type accounts, and the very low bar for spreading a viral meme through a credulous public,” said Bradbury in an interview.
But this was something else. Several actual news organizations retweeted ProfJeffJarvis, even though the item was “prima facie absurd,” and the source’s avatar was an old man wearing a beer-funnel baseball cap, with a bio that labeled him a “hyperglocal thinkfluencer” who had co-founded the “Mogadishu:REinvent unconference.” He hadn’t even tweaked his Halloween Twitter handle, “Scary PJJ 2016.” He was trusted even though he begged people not to trust him. “It should be obvious, with a pause for thought, that the lights haven’t been on continuously since 1889: that scale of lighting would not have been viable in the late 1800s (the lighting was only installed in 1925); there were two world wars in between; it would be hugely expensive to leave the lights on continuously (as one French person pointed out); there have been many tragedies since then that would justify turning off the lights in mourning, such as the Charlie Hebdo murders as recently as January this year, and so on.” Yet Bradbury’s timeline transformed into a cascade of “I can’t believe this” and “actually you’re wrong.” He made the best of it:

Welcome to all my new followers. I look forward to puzzling and disappointing you! — Prof Jeff Jarvis 4.0 (@ProfJeffJarvis) November 14, 2015

And as he did so, more fake stories mushroomed across social media. “A number of legitimate news organizations posted the footage of the Eiffel Tower lights going off from January in memory of the Charlie Hebdo victims, but labeled the footage as November 13,” noted Bradbury.

In an e-mail, Bradbury explained why the rapid sharing of anything vaguely inspiration-shaped after a tragedy was so unsettling to him.

The social media reaction to a tragedy is a spaghetti mess of many strands, some OK but most of them useless. There are positive elements (in intention, at least), such as the #porteouverte hashtag and the Facebook “Safety Check” in Paris — though it remains to be seen how many people actually gained from these, either finding a place to stay or letting relatives know they were OK. (Also, it does trouble me that Facebook scored a PR win from Paris, furthering its agenda of becoming the de facto social identity of all humans, then monetizing this monopoly: if the Safety Check becomes a default state of affairs, is Facebook then responsible in some way for emergency responses; what are the implications when someone doesn’t post their safety status on Facebook and so on) But the part that feels the most useless to me is people’s vicarious participation in the event, which on the ground is a horrible tragedy, but in cyberspace is flattened to a meme like any other. Millions of people with no connection to Paris or the victims mindlessly throw in their two cents: performative signaling purely for their own selfish benefit, spreading information that is often false and which they have not vetted at all, simply for the sake of making noise. If people wanted to be helpful, they would either be silent, or they would put in some — even minimal — effort to be thoughtful. First, they could spread useful and vetted information. And second, they could throw support behind a viewpoint they believe in, such as speaking out against politicians using the attacks to demonize Muslims or migrants, which is exactly what the murderers responsible for the Paris attacks want to provoke. Instead of silence or helpfulness, social media pukes out stupidity, virtue-signaling and vicarious “enjoyment” (in a psychoanalytic sense) of a terrible tragedy by people thousands of miles away, for whom the event is just a meme they will participate in for a couple of days, then let fade into their timeline.

Crawling out from under the traffic, Bradbury managed to retweet someone who got that – and got the joke.

@ProfJeffJarvis can you at least consider donating your Likes/RTs to people in need?