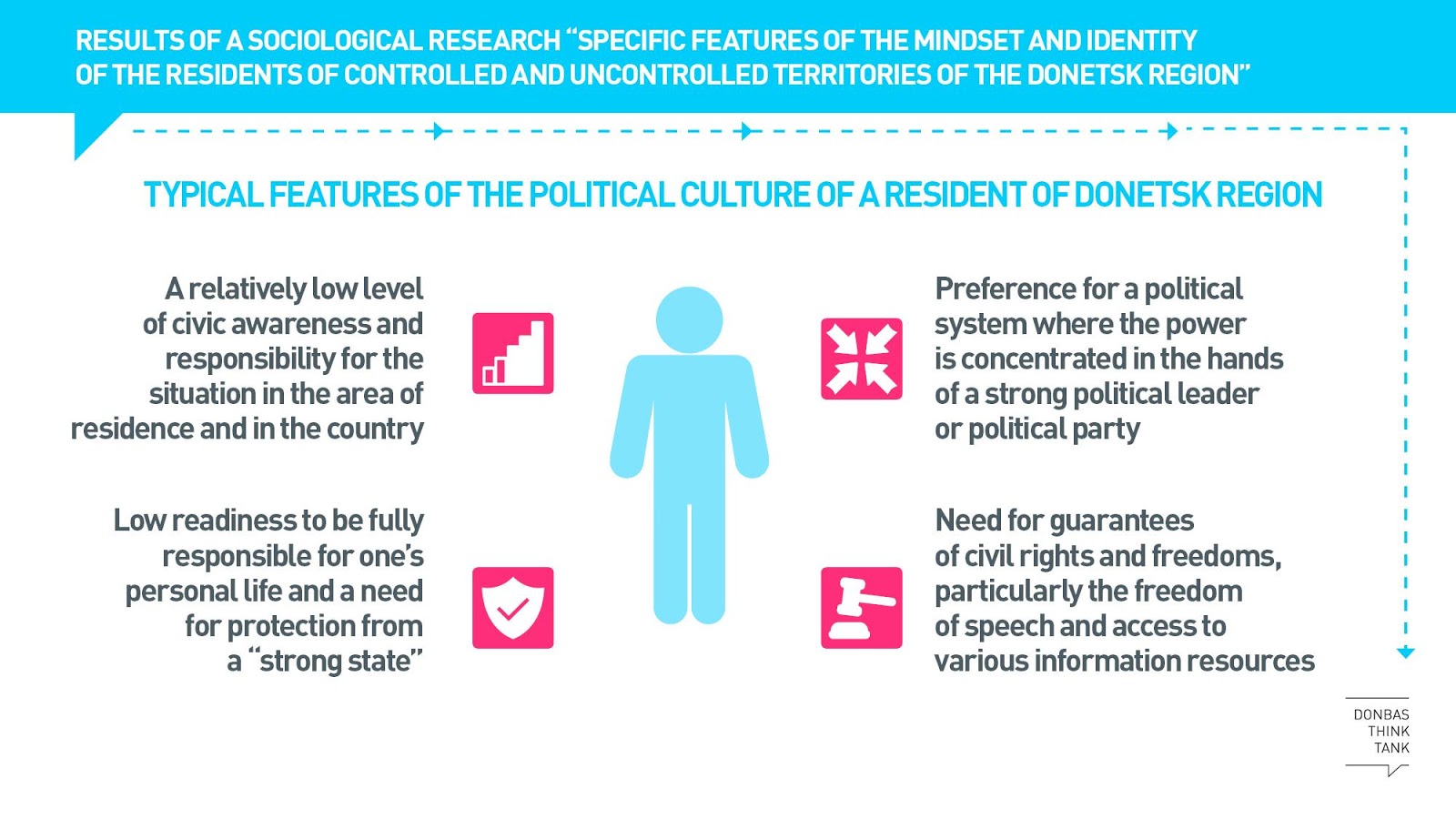 A new survey finds only small fraction of “DNR” residents identifying themselves as a “DNR” citizen. However, this number is prone to grow. Ukraine has 3-5 years to prevent an irreversible rift between people living in uncontrolled territories, Alya Shandra wrote for Euromaidan Press.

So far, a single entity

The survey shows that so far, residents on both sides of the front constitute a single socio-cultural entity. Its features are a strong territorial Donbas identity and feeling of belonging to the place of residence (60% on government-controlled, 61% on “DNR” territories), a need of protection by a “strong state” and a “strong leader,” and the importance of economic and cultural ties with Russia.

According to Dmytro Tkachenko, head of the Donbas Think Tank, this means that Donbas remains a paternalistic region whose residents are ready to take up full resposibility for their lives and their city and need protection from a ‘strong state.’ However, he notes, this is a feature shared with other regions of Ukraine.

Mr.Tkachenko notes that this is only natural for a society living in a closed information space under the heavy influence of propaganda, in which the occupation regime carries the monopoly to the truth. “This number also means that Russian propaganda in the XXI century is quite effective. People on the occupied territories see only one ‘picture,’ which is presented by the “DNR” and Russian media, and in result end up living in a parallel reality,” he asserts.

“As soon as Ukrainian authorities restore control over these territories, the situation will restore quickly. But if we do nothing, this identity is likely to grow,” Serhiy Hovorukha, the director of the Ukrainian office of the international research agency IFAK Institut told BBC.

And in 3-5 years, Ukraine risks “losing” the people living in the occupied territories, the authors of the survey conclude.

“These numbers were received on reliable samples – everything like in peaceful times,” emphasized Serhiy Hovorukha. He added that international sociological associations don’t recommend making surveys only during escalations of military conflicts, and the researchers did not collaborate with the self-proclaimed “authorities” of the “DNR” while making the survey on its territory.

With whom do they have more in common: with residents of Ukraine or Russia?

31% of “DNR” respondents said they were different from both residents of other Ukrainian regions and Russians; on the other side of the front, the number is only 16%. Similar fractions would prefer that Ukraine not join any political or economic unions (38% in Ukrainian-controlled territory and 30% in “DNR”-controlled territory). However, while the former are split between entering a union with the EU and Russia (slightly over 20%), overwhelmingly more wish to join a union with Russia than with the EU in occupied regions (48% versus 9%).

Although more residents on both sides of the front would prefer Ukraine to be a federation than the current unitary system, the numbers differ greatly: 46% versus 38% in Ukrainian-controlled localities, and 68% versus 15% in occupied regions. Where is life better?

The residents of the controlled area are aware that in regards economic (welfare, employment opportunities and price rates) and political (observance of human rights and freedoms, government’s readiness to listen to the people) living conditions in Ukraine are better than “DNR”.

However, while a significant part of the inhabitants of the uncontrolled area understand that in regards of economic parameters living conditions are better in Ukraine than in “DNR,” political parameters are more likely to be estimated in favor of “DNR.” 28% of respondents in the “DNR”-controlled regions fear the return of their territory under Ukraine’s control, meaning that the distance between them and the Ukrainian state is growing.At the same time, 23% of respondents in Ukrainian-controlled territories fear of Ukraine’s demise and the formation of several states on its territory, reflecting their lack of confidence in Ukraine’s integrity and strength. What should be done?

The Donbas Think Tank researchers emphasize: measures should be taken now to avoid losing the hearts of people living in temporarily occupied territories. They advise neutralizing the Donetsk TV tower broadcasting “DNR”-controlled media and/or constructing a TV tower on government-controlled territories that would carry equal broadcasting power. Simplifying rules of crossing checkpoints would enhance connectivity between the parts of the Oblast on both sides of the front.

But, what is even more important, a strategy of reintegrating Donbas should be developed and communicated. As no strategy exists so far, it is not suprising that nothing is being communicated, and Donbas is drifting away.

The survey was conducted with the support of National Endowment for Democracy and the International Renaissance Foundation. The full report in Ukrainian is available here and a translation is here.