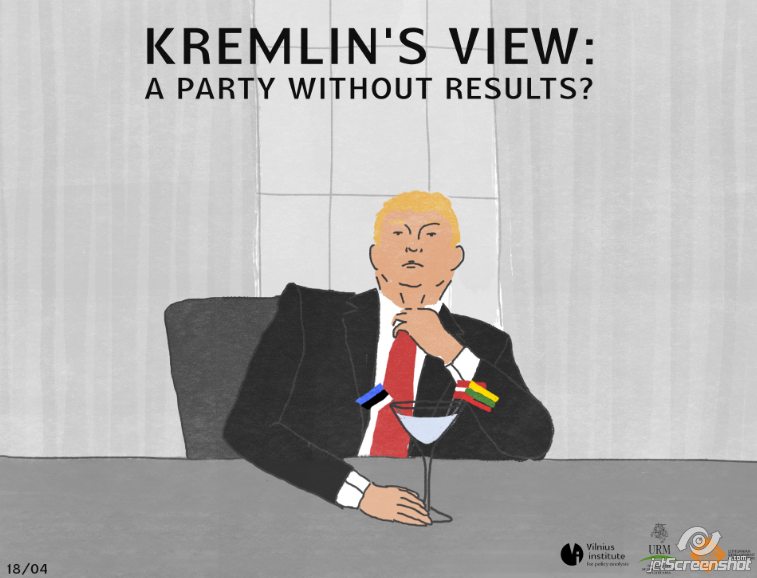 The Baltic presidents’ visit to the US has received special attention from the Kremlin-supported media in order to show that nothing serious has happened. Propaganda outlets tried to convey a message that not only Donald Trump has not promised anything to “the Pribalts”, but also that he has humiliated them. Some local Lithuanian periodicals put effort not to stay behind Kremlin’s disinformation channels. Their goal was not only to show that the visit was insignificant, but also to suggest that nobody cares about the Baltic States, that „we are left on our own“. Let‘s look at two examples of how the meeting at the White House was portrayed in Respublika’s commentary.

The narrative is constructed in these ways:

The main point of pro-Kremlin’s propaganda is not to encourage us to believe in Russia. The main goal is completely different: to encourage us to mistrust our allies and to renounce our strategic obligations. In this way Kremlin seeks to destroy the transatlantic bonds and to disunite the EU.

This text is part of the project aimed at strengthening democracy and civil society as well as fostering closer ties with the EU Eastern Partnership countries (Ukraine, Moldova, Georgia) by spreading independent information with the help of contemporary solutions. The project is implemented by Vilnius Institute for Policy Analysis, and is financed as part of Lithuanian Ministry of Foreign Affairs‘ Development Cooperation and Democracy Promotion Programme.