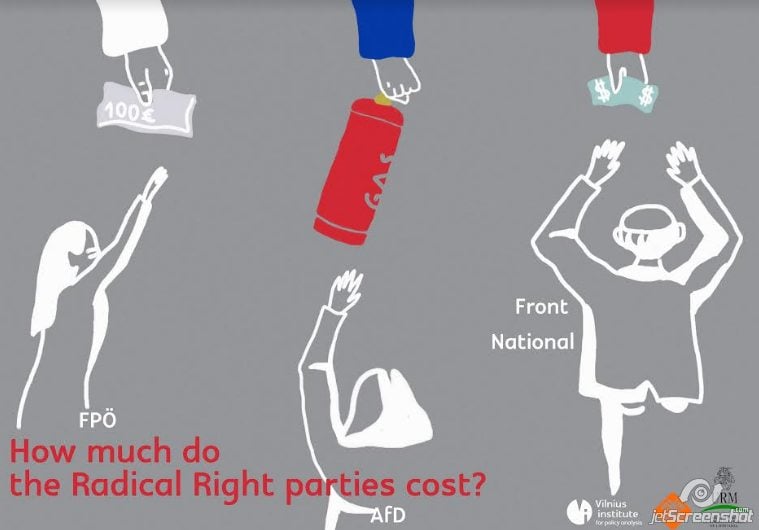 Yale historian Timothy Snyder in his latest book “The Road to Unfreedom” calls Kremlin’s politics schizofascism. By accusing everyone of fascism Kremlin is actually itself the bastion of fascism today, basing its neo-imperial ideology on such fascist-leaning philosophers as Ivan Illyin, Lev Gumilev, Aleksandr Dugin etc.

Just recently The Yalta International Economic Forum, organised by Kremlin, ended in Yalta, that is, in Russian-occupied Crimea. It is not by chance that this arena has been chosen for the forum: it is done so that the guests would legitimise both the Kremlin‘s foreign policy and the annexation of Crimea which was a blatant international law violation.

Let‘s look at how the forum is highlighted in the Kremlin’s propagandist media. Here is an example: RT posted Neil Clark’s (this former “Guardian” publicist parrots Kremlin’s line by propagating disinformation regarding Alexander Litvinenko and Sergei Skripal’s poisoning and other related questions) text “The real international community meets in Yalta – without the neocon thought police”. The text echoes standard Kremlin’s clichés about the Russophobic, hawk-like, fascist elite of the West which apparently does not even represent its people. According to Clark’s piece, the real defenders of Western citizens’ interests have gathered in Yalta. Let’s look at who they are and whom Kremlin does business with. What is interesting is that in this text Clark, while quoting the politicians who attended the forum, does not mention their political affiliation, withholding that the majority of these characters are members of radical right-wing, Eurosceptic, populist and xenophobic parties.

“We want to sell cars to Russia and Russia wants to sell us gas,” explained Markus Frohnmaier, who was introduced as a member of Bundestag, not mentioning that he is a member of the radical “Alternative for Germany” party.

Another is Bill Etheridge, a member of UK Independence Party. He explained that the UK is not a democratic country; in his view, only the ruling elite is expressing animosity towards Kremlin, but not the citizens who in this case do not have a voice. Again it is interesting that Bill Etheridge is representing a party who most actively supported the Brexit referendum. By the way, Bill Etheridge himself praised Adolf Hitler as an excellent orator while giving a lecture to the youth of his party.

Let’s look further: the text celebrates that the Vice-burgomaster of Linz addressed the guests in Russian and demanded to change the European stance towards Russia. The Vice-burgomaster, Detlef Wimmer, represents the “Freedom Party of Austria”, a radical right-wing party which has an agreement with Kremlin’s “United Russia” party. The Freedom Party of Austria delegated its observers to the so-called “referendum” in Crimea which was manipulated to justify the annexation of the territory while violating the norms of the international law.

The French politician that is quoted is MEP Nicolas Bay, who, easy to guess, belongs to the radical right-wing, anti-European “National Front” which has an official agreement of cooperation with the “United Russia”.

Therefore, it is obvious that Kremlin united its radical right-wing friends who are against EU in Yalta. The aforementioned historian Timothy Snyder stresses that Kremlin collaborates with the radicals from all sides in order to destroy EU just because it embodies an alternative to the kleptocratic Russian regime which is inherently scornful of liberal democracy and the rule of law. T. Snyder calls this tactic strategic relativism whereby Kremlin seeks to boost its power not by improving the situation in Russia but by simply seeking to undermine and destroy its opponents. As Kremlin does not want and is not capable of becoming like Europe, it rather seeks to make its opponents seem like Russia. According to T. Snyder, Kremlin’s radical friends all around Europe are doing them an excellent service.

This text is part of the project aimed at strengthening democracy and civil society as well as fostering closer ties with the EU Eastern Partnership countries (Ukraine, Moldova, Georgia) by spreading independent information with the help of contemporary solutions. The project is implemented by Vilnius Institute for Policy Analysis, and is financed as part of Lithuanian Ministry of Foreign Affairs‘ Development Cooperation and Democracy Promotion Programme.