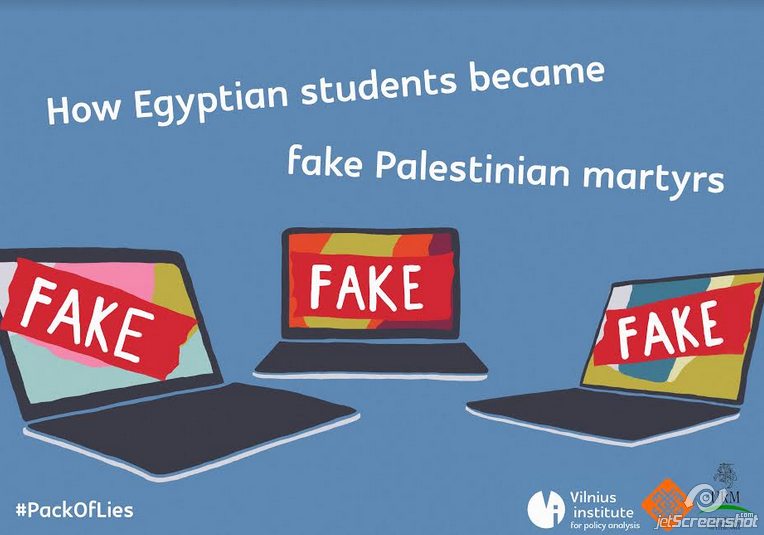 A fake video, supposedly showing how the Palestinians in the Gaza Strip filmed misleading videos about the seemingly killed martyrs of their own so that they could accuse Israel of crimes against humanity, went viral not only in Lithuania but also all around the world two weeks ago.

As the debates are taking place in a public sphere whether the Israel army’s response to the Palestinians’ protests in the Gaza Strip was proportional, this video with a caption “Dead Palestinian martyr has an itchy nose” was immediately used as a serious argument proving that the Palestinians create fake reportages.

It did not take long before it turned out that the video was not shot in the Gaza Strip. In fact, action took place in Egypt. The people recorded on the video are not the allegedly killed people, but performing Egyptian students. As announced by the “Digital Forensic Research Lab“, this video reportage first appeared on a left-wing Egyptian portal “El Badil“. The students in the video are protesting by pretending to be dead.

In 2014 the video reportage was used for the first time in an entirely different context. Egyptian TV channel “El Balad” used it in order to prove that the bloody attack against demonstrators (2013 massacre when after the democratically elected president Mohamed Morsi’s overturn security forces attacked the demonstrators in the Rabaa al-Adawiya and Al-Nahda squares in Cairo) was a sham. Back then 817 demonstrators died in Rabaa al-Adawiya Square only.

A more in-depth search on “Youtube” assures that the mentioned video reportage (https://www.youtube.com/watch?v=tPaq_TNEYwY) was used as the alleged proof about the terrorist group “Hamas” lying about the civil casualties back in 2014. Though that does not mean that “Hamas” do not lie in many other cases, examples like this one encourage to ponder how the attempts to base something on fake proof discredit the aim to find truth in such sensitive and politically charged cases.

For Kremlin, this is a golden opportunity allowing to speak loudly about the deceitful pro-Israel (and, by implication, Western) propaganda. Kremlin’s propaganda arm RT has already spinned this video clip irresponsibly (https://www.rt.com/news/427027-fake-hamas-funeral-debunk-propaganda/). In this case Kremlin’s mouthpiece which usually massively broadcasts  propaganda itself (this has been proven many times) got a chance to take up the role of a legitimate fighter against fake news.

However, the most important thing in this situation is what Yale historian Timothy Snyder has discussed in his recent book “The Road to Unfreedom“. According to him, Kremlin’s propaganda platforms do not even pretend that they are not spreading propaganda. It tries to show that everyone is engaged in spreading their own versions of propaganda, but only Kremlin’s mouthpieces do not pretend to be objective, and therefore are more sincere. In other words, fighting for truth or objectivity is not Kremlin’s goal. The goal is to confuse, to encourage people to doubt everything and regard any information piece as possibly fake or deceptive. An informed citizen can only act based on his own information, whereas a citizen who questions everything and does not believe in anything is not capable to act politically anymore. One of the fundamental functions of Kremlin’s disinformation is to paralyse the political action of citizens (both in Russia and in the West). Sadly, we can also contribute to this while doing something as irresponsible as uncritical and impulsive video sharing.

This text is part of a project aimed at strengthening democracy and civil society as well as fostering closer ties with the EU Eastern Partnership countries (Ukraine, Moldova, Georgia) by spreading independent information with the help of contemporary solutions. The project is implemented by Vilnius Institute for Policy Analysis, and is financed as part of Lithuanian Ministry of Foreign Affairs‘ Development Cooperation and Democracy Promotion Programme.