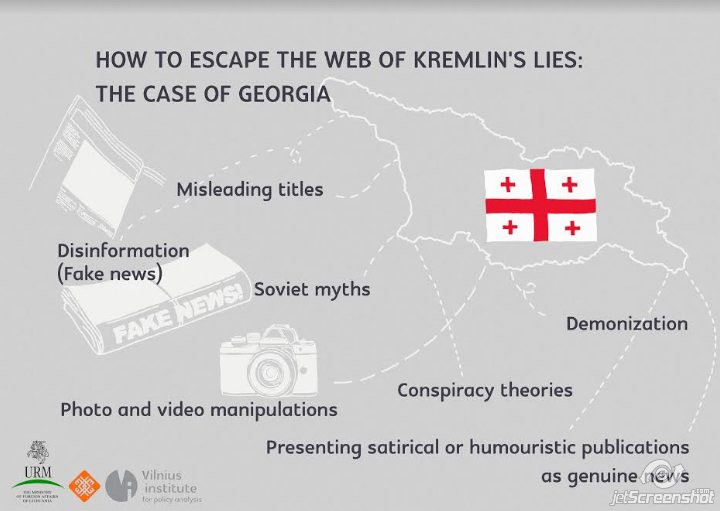 Kremlin’s propaganda is spreading lies in Georgia that September 11 attacks were perpetrated by the US government itself, and that liberalism is linked to the ancient Roman God Liber, famous for alcoholism and sexual perversion. These lies are meant to discredit Western democracies and liberalism as an ideology of freedom. As this is not the first time that Kremlin and its sources are spreading these kind of lies, it is necessary to expose the cases of fake news and adverse propaganda as well as to acquire a deeper understanding of methods applied in order to find an effective antidote to them.

Georgia’s “Media Development Foundation” investigated 65 specific cases of propaganda dissemination in Georgia and determined that the media itself became the source of disinformation in 37 cases, while the rest of the cases were of other sources, supposedly private individuals.

It is important to note that disseminators of disinformation did not even bother to specify their sources of information in most cases. Also, there were some cases where humouristic-satyrical English or Russian sources were referred to as primary. Thus, it is important to question the source of any information encountered. If there are no sources mentioned, that is already a good reason not to trust the information. If the source is mentioned, it is helpful to check its nature, owners, editors, etc. It is also advisable to check the authors and interviewees, to question whether they are fictitious or not, are they competent to talk about specific questions, is their reputation intact, etc. If you find something questionable, it is worth publicizing.

The “Media Development Foundation” experts note that primary Russian sources are often kept secret in Georgia. Also, anti-Western disinformation is mostly published in specific platforms designated for such purpose. Therefore, it is important to have a list of such platforms, media and journalists that consciously deceive their audience by disguising the primary sources, spread disinformation, and violate journalistic ethics. According to the experts, refutation of disinformation has to be communicated not only on the internet, but on other media platforms as well. Also, it is necessary to help develop the competences of professionals working in the media in order to make them capable to spot the attempts to mislead and manipulate them.

The aforementioned investigation by “Media Development Foundation” has revealed the main propaganda methods used in Georgia:
• Disinformation (e.g., the portal “Georgia&World” declared that the September 11 attacks were organized by the US government);
• Conspiracy theories (Georgian businessman L. Vasadze explained that the term “liberal” originates from the Roman god Liber, famous for alcoholism and sexual perversion);
• Demonization (“Georgia&World” proclaimed that “the US are attempting to breed a human and monkey’s hybrid for labor”.)