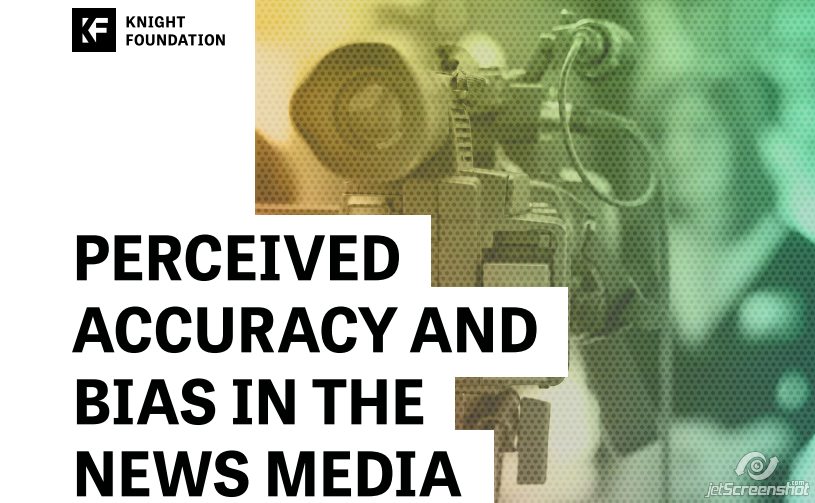 Gallup and Knight Foundation’s 2017 Survey on Trust, Media and Democracy found that Americans believe the news media have a critical role to play in U.S. democracy but are not performing that role well. One of Americans’ chief concerns about media is bias, and Americans are much more likely to perceive bias in the news today than they were a generation ago.

A Feb. 5-March 11, 2018, Gallup/Knight Foundation survey of 1,440 Gallup Panel members assessed how pervasive U.S. adults believe bias in news reporting is, and whether they make distinctions between bias and inaccuracy.

The survey also probed for Americans’ reactions when they see biased or inaccurate reporting and sought to determine if the reactions depend on whether that reporting is about groups or individuals they support or oppose. Among the key findings in the survey:

To a large degree, bias and accuracy appear to be in the eye of the beholder, greatly influenced by whether one agrees with the ideological leaning of the news source. Americans’ perceptions of fairly widespread bias and inaccuracy in news may be unduly influenced by the bias they perceive from the “other side” of the ideological spectrum rather than their own side. Counteracting perceptions of bias and inaccuracy may have a role to play in addressing the lack of trust in the news media and giving Americans more confidence in the media’s ability to carry out its democratic responsibilities.

Gallup and Knight Foundation acknowledge support for this research from the Ford Foundation, the Bill & Melinda Gates Foundation, and the Open Society Foundations.