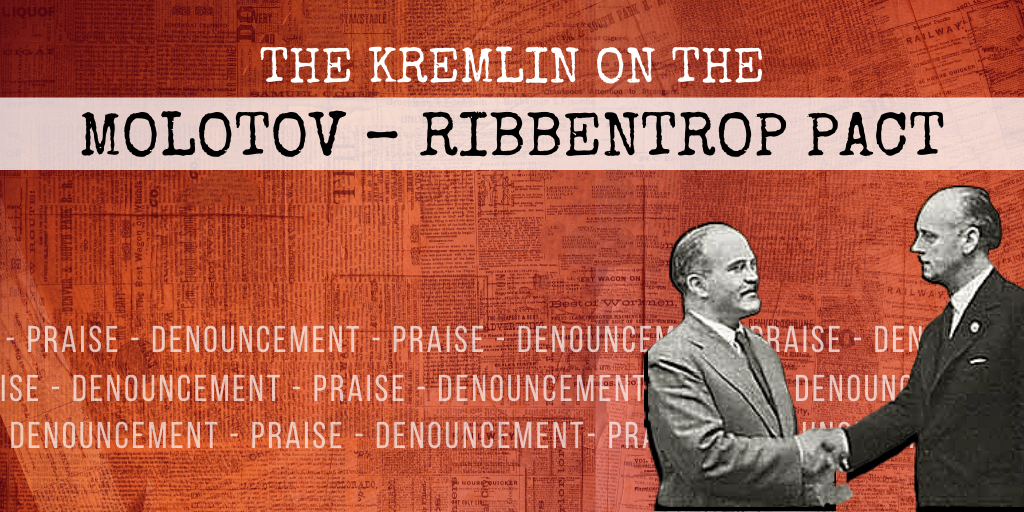 The Kremlin on the Molotov – Ribbentrop Pact

One feature in the Kremlin disinformation efforts is the lack of consistency. Disinformation outlets throw out dozens of different lies on key issues like the Skripal Case and the MH17… The same can be observed with disinformation around World War II and the Molotov – Ribbentrop Pact, where the Kremlin ping-pongs between praising the pact and denouncing it.

The decision is in conflict with the principles of historic justice and was taken in the context of the growing political instability of the time, followed by pressure from foreign powers. The decision was prepared by the Committee for evaluation of the political and legal ramifications of the Soviet – German non-aggression pact of 1939 and was not guided by principles of objectivity and lack of bias.

The Congress notes that during this period the relations of the USSR with Latvia, Lithuania and Estonia were regulated by a system of treaties. Pursuant to the 1920 Peace Treaties and 1926-1933 Non-Aggression Treaties, the signatories were obliged to honour each other’s sovereignty, territorial integrity and inviolability under any circumstances. The Soviet Union had assumed similar obligations to Poland and Finland.

In September 2019, the European parliament adopted a resolution on the 80 anniversary of the outbreak of World War II. The resolution refers to the above Soviet parliament denouncement of the Molotov – Ribbentop but provoked a furious reaction in the Kremlin. Russian media initiated a campaign to describe Poland and the Western Powers as main culprits of WWII. Russian state news agency Sputnik attacked Poland viciously.

A Pact for Peace

The Molotov – Ribbentrop pact created preconditions for Hitler and Stalin to go forth on territorial expansion. The Pact itself did not cause the war, but it made the war possible. It gave both parties freedom of movement. Joseph Stalin personally described the relationship between Germany and the Soviet Union as a “Friendship Forged in Blood”.

Telegram from Stalin to Nazi foreign minister Joachim von Ribbentrop, December 1940: “The friendship, forged in blood, between the peoples of Germany and the Soviet Union, has all chances of being durable and strong.”

The Molotov – Ribbentrop pact allowed the Soviet Union to expand its territory on the expense of its neighbours. Finland and Romania were forced to cede big parts of its territories; Estonia, Latvia and Lithuania was occupied and annexed; all along the agreement with Nazi Germany. The Kremlin attempted to deny for several years the existence of secret protocols, delimiting the spheres of interests of Nazi Germany and Soviet Russia. Of the signatories of the treaty, only the Soviet Union retained the territory, gained by the agreement between the parties.

The Molotov – Ribbentrop Pact is not a complicated issue. It is very well documented; all documents have been available for research for dekades. The outcome, the causes and the results are well studied and well known. Yet, Kremlin is desperately struggling with how to relate to it. We saw above that the Soviet Parliament denounced it in 1989. Vladimir Putin personally referred to this denouncement in 2009, in an article for the Polish daily Gazeta Wyborcza (link here to an official Russian translation of the original text):

The immoral character of the Molotov – Ribbentrop pact received an explicit evaluation of the parliament of our country.

Five years later, 2014, the Russian President changed his view on the pact:

Only to change back to a critical assessment of the treaty with the Nazis in his recent article on the lessons of history:

Let me also remind you that the Soviet Union gave a legal and moral assessment of the so-called Molotov–Ribbentrop Pact. The Supreme Soviet in its resolution of December 24, 1989 officially denounced the secret protocols as “an act of personal power” which in no way reﬂected “the will of the Soviet people who bear no responsibility for this collusion.”

This ambiguous relation to Russia’s past creates problems, even for those who want to support Kremlin’s ambition on using history as a political tool. One of Kremlin’s historian expresses irritation with this ever-changing attitude towards the pact:

The Parliament is not a platform for political debate!

Neither should history be.

Edit: Clarification of source of quote.