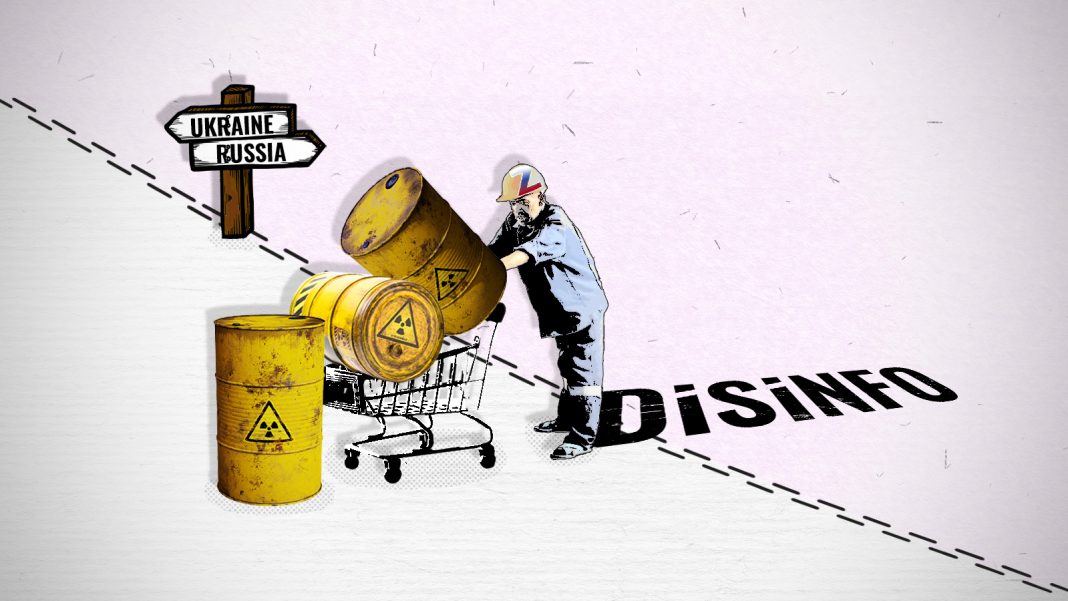 Russia’s unprovoked and brutal war of aggression against Ukraine has raged for nearly six months. And just like the invaders on the battlefields across Ukraine, pro-Kremlin disinformation zealots have become increasingly reckless and hateful across the battlefields of information spaces.

We have written before how disinformation bordering on unbridled hate speech has been used to dehumanise the war’s victims in Ukraine, leading to very real atrocities committed by the invaders in Bucha, Mariupol, and Kramatorsk, just to name a few places. Callousness and a disregard for the human impact of their words is a defining trait of Kremlin trolls slinging disinformation.

Now, it seems that they have set their sights on yet another target – the Zaporizhzhia nuclear power plant (ZNPP). By doing so, they disregard the risks of miscalculation, escalation, or simple human error that their disinformation could facilitate.

This is not the first time the Kremlin’s manipulation and disinformation machine has used a deep-seated and very reasonable fear of a nuclear disaster to advance its political and military goals in Ukraine. Allegations that Ukraine is preparing to commit provocations and terrorist attacks, that Ukraine is shelling the ZNPP to trigger an international peacekeeping mission, that the US has secret labs in ZNPP, that the West was preparing a CBRN provocation, and that the West is responsible for Ukraine shelling the ZNPP are just a few of the latest examples of pro-Kremlin disinformation. The tactic is familiar – throw as many accusations as possible and see what sticks.

It might seem like unmitigated madness akin to the fictional Dr Strangelove to play ‘nuclear chicken’ with the world and see who blinks first. Then again, if leaders in the Kremlin have no moral qualms about using disinformation about food security as a geopolitical weapon, they are likely to be just as unscrupulous when it comes to putting the world at risk of a nuclear disaster.

Beyond the disinformation permeating Russian talk shows, print and online outlets, and social media, the Kremlin has also drummed up nuclear fears at the highest international level. It has used its diplomats at the UN Security Council to falsely accuse Ukraine or to blame the US for blocking the dispatch of a fact-finding mission by the International Atomic Energy Agency.

No international discourse on nuclear issues would be complete without the Kremlin’s well-known disinformation tropes on arms control, baselessly accusing NATO of breaching the Non-Proliferation Treaty (NPT). But even Russian arms control experts know full well that NATO’s nuclear sharing arrangements are fully compliant with the NPT. These complaints are even more hypocritical given Russia’s aggressive nuclear rhetoric that has escalated since the war began.

When in Doubt, Blame the Baltics

Drumming up nuclear fears and gambling with global security were not the only pastimes of pro-Kremlin disinformation peddlers. They also had a busy week hunting for the imaginary spectre of Nazism in one of their favoured target regions, the Baltics. The latest impetus for screaming ‘Russophobia!’ came after Latvia, Finland, Estonia, Poland, Lithuania, Czechia, and Slovakia called for suspending the issuance of tourist visas to Russia while that country is waging war in Ukraine.

On cue, Kremlin propagandists sought to outdo each other. Some used the occasion to muse about divisions within the EU while others shed crocodile tears for irreversibly ruptured Western relations with Russia. The overarching theme was one of manipulative accusations. Some commentators drew imaginative if false historical parallels with Nazi policies toward the Jews in the 1930s.

But in the eyes of Russian state-controlled disinformation outlets and their lackeys, the Baltics have been naughty beyond their usual mischief. According to the Kremlin, Latvia’s decision to declare Russia a state sponsor of terrorism shows that ‘Russophobia’ in that country has gone completely off the rails. For a paragon of international law such as Russia, the designation is an affront to all that is sacred. To many observers, declaring Russia a terrorist state is logical since the Kremlin uses fear, violence, hostility, and outright war to foment global instability for geopolitical gain.

Estonia too landed in the pro-Kremlin disinformation crosshairs. First, it instigated calls for a ‘visa-ban’ against ordinary peace-loving Russians. Then it colluded with Finland to make the Baltic Sea a internal NATO sea. And the country topped it all off by dismantling the statue of a Soviet T-34 tank in Narva that had hitherto proudly reminded Estonians of five decades of Soviet ‘liberation’ of the more totalitarian variety. It escaped Kremlin ideologues’ grasp that these Estonian actions could be a justified response to an increasingly belligerent neighbour.

Perhaps unwilling to leave the job half-done, but more likely simply caught up in their own imperialist delusions, pro-Kremlin propagandists did not miss the occasion to level accusations against Lithuania as well. Among the more imaginative were an invocation of ‘Iron Curtain’ metaphors alleging that Lithuania wants to completely isolate all Russians, but particularly those who oppose Putin’s totalitarian regime. The implication of this claim is that Lithuania could be planning to use dissidents to foment a ‘colour revolution’ in Russia. The claim is outrageous, but we have documented the Kremlin’s obsession with ‘colour revolutions’ for years.

The underlying disinformation narrative in the latest slew of false accusations against the Baltics is the familiar pro-Kremlin disinformation trope of ‘lost sovereignty’. Put simply, shadowy masters in Washington are once again pulling all the strings. Unconvinced? You should take Kremlin propagandists’ word for it.

In other disinformation news: