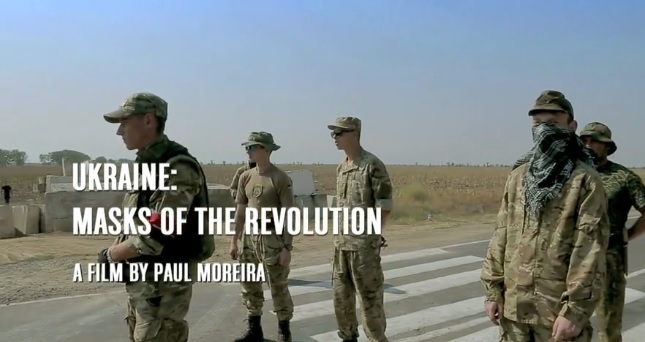 The documentary has been widely criticized for the author’s ignorance of a Russian-backed conflict in Ukraine and distorted portrayal of the tragic fire in the Odesa Trade Union building on 2 May 2014.

“Ukraine. Masks of the Revolution” was broadcasted by the “Ewa Ewart recommends: Documentary on TVN24” show. Before the film Ewa Ewart reminded of the second anniversary of the tragic events on Maidan and noted, that the proposed documentary is “controversial,” the Polish Radio reports.

The broadcasting has sparked outrage among the Ukrainian community in Poland and Polish journalists. The Embassy of Ukraine in Poland commented on the broadcasting in an official statement.

“The Embassy of Ukraine in Poland is disappointed by the unfriendly gesture of the Polish TV channel “TVN24” which today has shown disrespect to millions of Ukrainians by broadcasting the lying and manipulative film by Paul Moreira “Ukraine. Masks of the Revolution,” the official statement says.

“What hurts the most, is that the Polish channel timed this film with the second anniversary of the Revolution of Dignity.”

The Embassy demanded the channel explain “why from variety of objective films about Maidan events this particular lying creature of the Russian propaganda was chosen, which insults the memory of Heroes of the Revolution of Dignity.”

“To me, broadcasting of the film “Ukraine. Masks of the Revolution without the appropriate explanation what kind of a film that was, is a scandal. This French film is lying, it is using classical manipulation techniques for depicting Ukrainian events that correspond to the Russian narrative,” Polish journalist Michał Kacewicz commented for the Polish Radio. Kacewicz has been reporting on Ukraine for years and is currently working for Newsweek Poland.

“The majority of Polish people don’t know those events in details. Considering our sensitivity to the topic of Ukrainian nationalism, this film can strengthen the feeling of fear and threat which are allegedly coming from the new Ukraine,” Kacewicz emphasized.

Ukrainian activists living in Poland also condemned the move of TVN24. In a statement on their Facebook page, members of Euromaidan-Warszawa reminded how much Poland supported Maidan, how many Polish journalists reported from the revolution and how many politicians were coming to Maidan to support the civil society of Ukraine despite their own political views.

“It turns out that, by broadcasting that film, the Polish television accuses its journalists, politicians, civic activists and ordinary people that were supporting Maidan in supporting the ‘neonazis’ and ‘banderowites.’ Bravo, Putin would be delighted!”