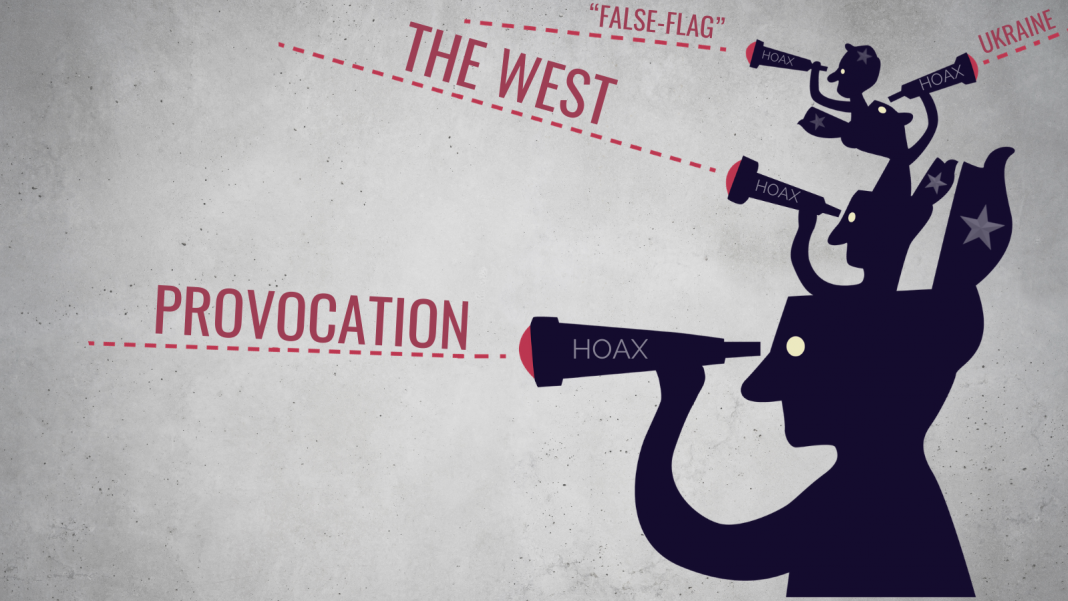 Hoaxes as a Kremlin Tactic

The pro-Kremlin media spend much of their time detecting Western “provocations” before they even take place. But as the EUvsDisinfo database will tell you, none of them ever do. This discrepancy does not mean that the Kremlin’s top brass is uniquely terrible at interpreting its own intelligence briefs. Rather, it attests the long-employed Kremlin tactic of devising a hoax – or manipulating the facts surrounding a real event – in order to either discredit, embarrass, redirect blame, or contain the fallout from a botched operation.

The Russian term provokatsiya – literally, “provocation” – carries a more ominous connotation than its English-language equivalent, originating as it does from the playbook of Okhrana, the notorious secret police of late Tsarist Russia. In modern times, cries of “provokatsiya” have been used to shield the Russian authorities from accountability for a number of high-profile assassinations, including those of spy-turned-whistleblower Aleksandr Litvinenko (2006), or former double agent Sergey Skripal (2018, survived), and anti-corruption activist Alexei Navalny (2020, survived).

On the other hand, reports “predicting” upcoming provocations are used primarily to reinforce existing disinformation narratives. In Syria, for instance, the unfortunately named Russian Reconciliation Centre is responsible for an entire catalogue of bogus reports warning that a “false-flag” chemical attack is due to be perpetrated in one area or another, usually by the White Helmets or an “affiliated” terrorist cell. Made without a shred of proof and with zero per cent accuracy, these claims advance the broader goal of demonising the Syrian volunteers and opposition and masking President Assad’s well-documented record of chemical weapons use.

The Kremlin has used the same approach in a myriad other scenarios, including the Skripal poisoning; the alleged NATO buildup in the Black Sea; and an alleged secret NATO mission in Crimea designed to rig the 2019 Ukrainian presidential election.

Finally, in what is perhaps the most grotesque submission in the “provokatsiya” category to date: in March 2021, leading pro-Kremlin outlets reported the existence of an international conspiracy to discredit the Sputnik V vaccine. The scheme, concocted by an unholy alliance between intelligence outfits, top news agencies, and – wait for it – financier George Soros, was said to feature fabricated video footage of mass fatalities among the inoculated, and thus expose “the incompetence of Russian specialists in the field of vaccination and immunology”. All of this is attributed to a single, mysterious, “high-ranking Kremlin source”.

EUvsDisinfo noted elsewhere that the Kremlin’s obsession with Ukraine dates as far back as spring 2014 – the early days of Russian aggression in Crimea and the Donbas. Among some 12,000 cases of pro-Kremlin disinformation in the EUvsDisinfo database, more than a third target Russia’s western neighbour. This is often done in contemptuous terms, painting Ukraine as an inept pseudo-state, fatally dependent on its western paymasters for financial aid, policy guidance and armaments.

One narrative which the pro-Kremlin media have relentlessly pursued since 2014 anticipates the imminent collapse of Ukraine as a functional polity. Although we now know these individual predictions to be comically inaccurate, their true absurdity is revealed if we examine them as a whole. Taken together, they are so mutually contradictory as to put the country in a “damned if I do – damned if I don’t” situation: regardless of its domestic or foreign policy moves, post-Euromaidan Ukraine will sooner or later be wiped off the map.

Thus, already in September 2014, a group of Russia-based “human rights experts” warned that Ukraine would disintegrate in a matter of months. In September 2015, Russian far-right parliamentarian Vladimir Zhirinovskiy pushed this fateful date back to “no later than […] 2018.” Nearly six years later, in February 2021, a pro-Kremlin pundit said the process of Ukraine’s inevitable demise was still “under way,” but refused to assign a timeline.

Another, even more confusing set of predictions links the upcoming collapse to specific decisions made by the authorities in Kyiv or the Ukrainian citizens themselves. In 2016, a group of experts quizzed by Russia’s state-run RIA Novosti agency said Ukraine would disintegrate on account of its reluctance to “federalise”; in 2017, a Russian analyst said the only thing keeping the country in one piece is “external EU and US pressure”; whereas in March 2019, with the Ukrainian presidential campaign in full swing, RIA Novosti cited a group of analysts as saying Volodymyr Zelensky’s victory would lead to the “gradual collapse of the state”. Some two weeks later, Nikolay Patrushev (Russia’s national security chief, no less) issued his own assessment of Ukraine’s near future: the country is bound to collapse if Petro Poroshenko remains president.

In the 18th century, Grigoriy Potemkin, a Russian nobleman and favourite of Russia’s Empress Catherine the Great, wanted to show the Empress the prosperity of the newly conquered Crimean peninsula. He had portable fake villages set up along the road she travelled, to impress the Empress. These so-called Potemkin Villages have become a symbol of systematic deception. The 100 per cent failure rate of the Kremlin predictions serves a similar function.

These “prophecies” are made in bad faith and without a scrap of evidence. Their principal aim is not to keep the news consumer abreast of future developments, but to skew their perception of the past and present by amplifying established disinformation narratives.