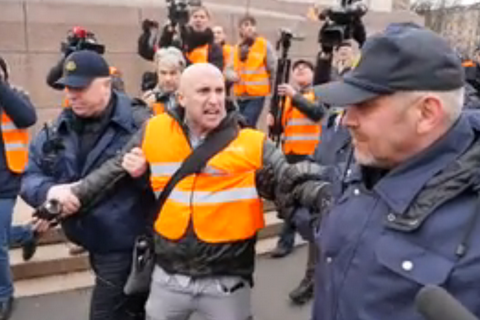 Latvian police have confirmed they have detained pro-Kremlin journalist Graham Phillips during the Latvian Legionnaire’s Remembrance Day events at the Freedom Monument in Riga.

Phillips was then detained after ignoring police orders.

Markitans added that Phillips will be administratively fined for his disruptive behaviour.

No other persons have been detained, Markitans confirmed to LETA.

Phillips is not the first pro-Kremlin body to have attempted to stir discord around the March 16 parade.

On the morning of March 16, the Russian Embassy in Riga described the events as an “attempt to glorify Nazism.”

Phillips is employed by Kremlin-backed news channel, RT, as a freelancer. He became known for his pro-Kremlin activities in Eastern Ukraine.

He moved to Ukraine in 2010, when he became a nightlife correspondent for a local English-language publication in Kiev. He soon began documenting his life in Ukraine in a blog entitled ‘A Brit in Ukraine’, which contained entries about prostitutes, students who moonlight as escorts, and foreign-bride hunters.

During the Euromaidan protests in 2014, his posts against the anti-Yanukovich protesters gained the interest of RT.

Further information about Phillips is available here via an article originally featured on Buzzfeed.