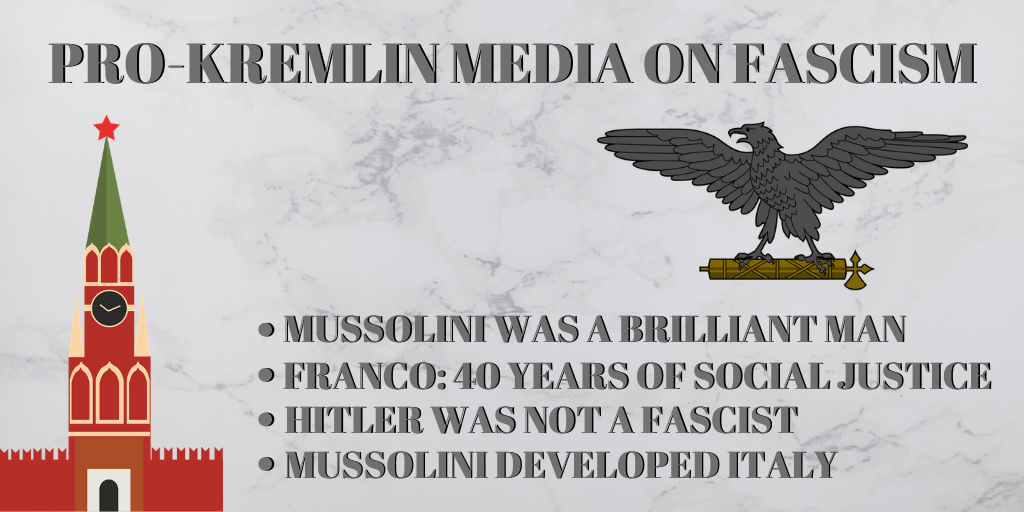 Pro-Kremlin media have recently started to express sympathy for Fascism. This is not entirely new: The Web Site News Front, based in illegally annexed Crimea, has been praising Hitler and Nazism; pro-Kremlin Russia Insider is not only attempting to whitewash Nazism, but is also openly anti-Semitic. But recently, this passion for Fascism seems to have reached new levels. Here are some quotes from January 2020:

“Mussolini was a brilliant man, giving the world a third path, on which Russia, in part, is moving.”

“He developed the industry, built roads and supported advanced technology in mechanical engineering and aviation. [—] Italy during the last years of the alliance with Hitler had nothing to do with Italy of the 30s: a bold esthetical project to resurrect the Empire of the past”

In 2013, Kremlin propagandist and EU resident Vladimir Solovyov produced a film based on the conspiracy theory that the Italian Fascist leader Benito Mussolini was not hanged at a petrol station at Lake Como. The film depicts Mussolini with great sympathy; a courageous leader.

Solovyov’s film premiered during the Euromaidan events in Ukraine and did not attract much attention at the time. But it resurfaced as the RT writer Igor Molotov expressed his admiration for the film:

Vladimir Solovyov has made a very important film. It is important because Il Duce is considered a maniac, and people do not know that fascism and the disgusting Nazism are different things. Mussolini was a brilliant man, giving the world a third path, on which Russia, in part, is moving.”

Molotov is a fairly unknown writer who supplies RT in Russian with small essays roughly twice a month, and very few would have noticed the above mentioned post, had it not been republished by Vladimir Soloviev himself with 150 000 followers on Telegram, 1,4 million followers on Twitter and a TV show on Russia’s State TV Channel Rossiya. Solovyov’s retweeting of Molotov’s words on Russia following in the footsteps of Mussolini did certainly provoke a strong reaction in Russia. Solovyov received strong push-back on social media; opposition leader Alexey Navalny writes on his Twitter Account:

I hope next time he [Solovyov] calls me “a little Nazi”, he will sign “Benito’s loyal son”.

I imagine the hysterical reactions from our state broadcasters and the Duma, should [opposition] channels like Echo Moskvy or TV Rain allow themselves to say something similar. But when the head propagandist does it, all respect for our grandfathers is void. Who cares about against whom our grandfathers fought if Il Duce was such a great guy?

“Hitler Was Not a Fascist”

Aside RT, very few state media have taken up this topic at the moment, but sympathy for Fascism isn’t anything entirely strange to the pro-Kremlin media. Geopolitica.ru praises Spain’s former Fascist leader: “Franco: Forty years of peace, social justice and prosperity.”

“The only thing that can be criticised is that he was so excessively noble and forgiving of many criminals on the red side.”

Meanwhile, pro-Kremlin media uses the term “fascism” to describe any political movement expressing criticism towards Moscow. The Disinformation Database contains almost 400 cases tagged Nazi/Fascism: Latin American non-leftist governments are “fascist“, Ukraine is ruled by “fascists“, Lithuanians are “fascists“, the European Parliament has joined forces with “Fascism“. The only one, at least according to the RT, who isn’t a fascist is Adolf Hitler:

Adolf Hitler never called himself a fascist. He was a national socialist, and his party was called the National Socialist Workers’ Party of Germany, and no Roman fasces were present, neither in the rethorics, nor in the aesthetics.

RT finishes its article hinting that opposition leader Aleksey Navalny is a fascist, but chooses not to use the word, out of respect for Il Duce:

I would very much like, on behalf of my opponents, to repeat the first line of this article – that fascists have appeared among us. But I will not do that. The rebellious spirit of Benito Mussolini will not allow me.