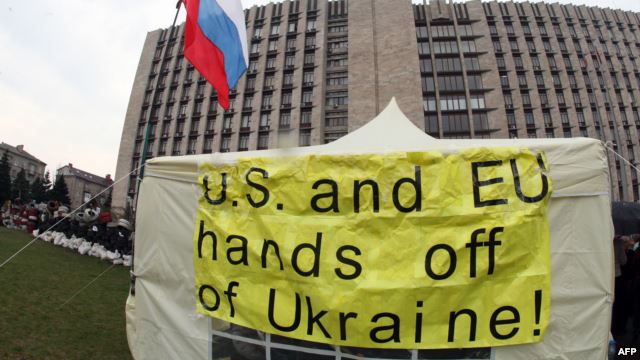 Over news agency footage of a signing ceremony in Brussels a narrator speaking in English reports drily that Ukraine has agreed to a series of trade agreements with the European Union.

The voice, heavily accented in Russian, then adds a point of context seemingly apropos of nothing:  “Recall you that the Palestinian Authority has signed the Association Agreement with the EU in 1997.”

It is one clip in a daily video news roundup created by “South Front,” a group supporting pro-Russian separatists in eastern Ukraine, writes Glenn Kates in the article for Radio Free Europe / Radio Liberty. The video, which begins with an unsubstantiated claim that “mass murder of civilians [by the Ukrainian Army] continues,” is part of a growing effort by separatist supporters to expand their reach beyond Russian-speakers.

Since mass pro-EU protests began last December in Kyiv, supporters of the pro-Western Euromaidan movement have used English-language social media to spread their message. The @EuromaidanPR English-language Twitter account has over 34,500 followers and several English Facebook pages supporting the movement have tens of thousands.

The pro-Russian point of view in English has largely been left to RT, Russia’s state-run foreign-language news channel, which is also known as Russia Today. Since April, when armed pro-Russian separatists began occupying buildings in Donetsk and Luhansk, over 400 people — including military personnel, separatist fighters, and civilians — have died in fighting between Ukrainian government forces and rebels, according to UN estimates.

The English-language Facebook page for South Front, which has slightly more than 11,500 subscribers, is a mix of carefully selected “news” from the region — usually from sources like LifeNews, a video news outlet believed to have ties to Russia’s security services — and anti-Ukrainian and anti-Western memes.

The post below, which seems to imply that the Ukrainian Army only targets schools, factories, homes, old women, and children, had been shared 283 times at writing. The South Front page is also used as a tool to organize sympathetic volunteers from outside Russia and Ukraine.

Content is currently translated into at least three other languages, including Polish, Hungarian, and German. And a recent call for help drew offers from social-media users to provide pro-Russian translations in Slovak, Czech, French, Spanish, Italian, Lithuanian, and Norwegian.

It is not clear who runs the group or whether it receives outside funding. Administrators did not reply to an RFE/RL reporter’s requests for comment sent through Facebook and Twitter.

Supporters who comment on the page appear to be largely based in Europe and have a radically anti-EU bent.

In one page thread, anti-Semitic language is rife when users from Serbia, Slovenia, Italy, Germany, and Hungary discuss their support for Russia and disdain for the EU.

“I am from Europe, but I don,t love europe [sic]” writes Nikolo Lovric, who says his real love is for Russia and the self-proclaimed separatist republic of “Novorossia.”  He then warns users not to trust Ukrainian President Petro Poroshenko, who he claims is a “cionistic [sic] player” for Israel and the United States.

But in a message to RFE/RL, a user from France who had earlier volunteered to provide French translations, said he had become convinced of accusations from Moscow that it is Ukraine that “relies on many fascists.”

“So I am not pretending that west of Ukraine is evil and east is good guys,” said the 29-year-old teacher, who asked that his name not be provided. “But that is certainly closer to the truth than what I hear in western medias.”