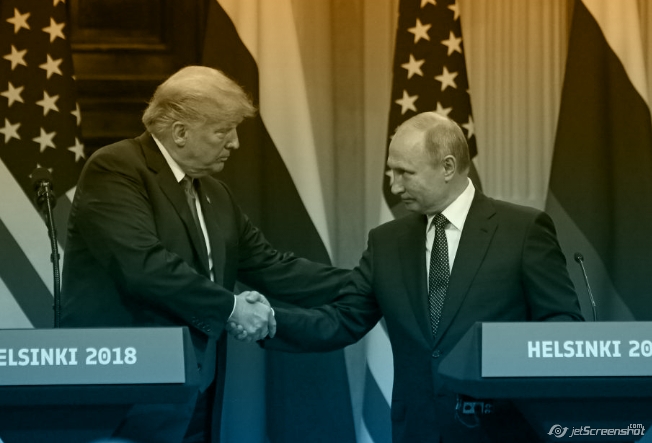 By supporting theories aimed at destabilising the US during the Coronavirus pandemic, Kseniya Kirillova reports on how Putin has opened up a Pandora’s Box at home.

According to a survey conducted by the Higher School of Economics at the end of May, a third of Russians (32.8%) believe that the danger of the Coronavirus pandemic is exaggerated or consider it to be an invention of “interested parties”.

Three-quarters of these people are convinced that quarantine measures are not necessary and therefore many of them went for a walk and visited relatives and friends even during the period of strict self-isolation.

Such indicators should not be surprising. At a time when the Coronavirus pandemic was already raging in Europe, Russian federal television channels almost openly declared it to be “machinations of the West” designed to hide the systemic crisis of “Anglo-Saxon civilisation” under the guise of a new global catastrophe.

Even at the end of March – when the authorities could no longer conceal that the virus was spreading in Russia – the ‘Military View’ website, close to the Russian Ministry of Defence, still wrote that the pandemic was purposely initiated by the “global elites” in order to blame it for the collapse of Western Civilisation.

When the number of cases in Russia began to rise steadily, the Russian media had to admit, if not the entire scale of the pandemic, then at least its seriousness. However, seeds sown earlier over several months have already sprouted. In early April, both pro-Government and opposition media noted the mass unwillingness of Russians to comply with quarantine measures.

“All sociologists say that the application of emergency measures doesn’t enjoy the support of the population and is capable of thoroughly collapsing the ratings of state institutions, given that they have been steadily declining since March,” observed the Nezigar Telegram channel, which is close to the Russian President’s administration.

Similar data has been published by the editor of regional projects of MBK Media, Ekaterina Neroznikova. According to her, people are annoyed by the authorities’ decision to restrict them and perceive these actions as oppressive; an excuse for new repression and as a hoax for the purpose of profit.

Regional correspondents of MBK Media, talking about the causes of the pandemic with ordinary people, have also noted that most mentioned “the conspiracy of the West, the uselessness of masks, fraud for the sake of raising prices, the benefits of ginger and God’s punishment”.

It is logical to assume that conspiracy theories about the virus originating in the UK or US as a “biological weapon” – a claim broadcast even by Russian media – prompted such ideas. Even more radical theories are spreading among the far-right audience that the “World Government” provoked a pandemic in order to destroy the “extra” population.

It is significant that, against the backdrop of the merciless fight against “fakes about the Coronavirus” by the Russian authorities, the Kremlin did not prosecute radical conspiracy theorists but provided them with broad platforms for expressing their views.

As it turned out, upon closer examination, most of these theories were based exclusively on American materials, skillfully selected and translated into Russian, including those with reference to the Qanon conspiracy theorist, one of the main American sources of myths about the occult nature of the “Deep State”.

The main idea of the theory is that America allegedly has been ruled by a cult of Satanists and cannibals, which is a supranational “World Government” and the American “Deep State” at the same time. According to the authors, this cult created the Coronavirus as an excuse for “chipization”. The only hero opposing this cult, conspiracy theorists proclaim, is the US President Donald Trump.

It is clear that official Russian propaganda doesn’t at all strive to create a cult of the American President in the eyes of Russians. Obviously, such materials were aimed primarily at Russian-speaking emigrants in the US and American far-right radicals, who maintain close ties with Russian radical organisations.

Today, we can see that this operation to destabilise the West, combined with the efforts of American conspiracy theorists, has had some success.

In recent months, American media has noted an increase in the wildest theories about the origin of the Coronavirus, primarily coming from the QAnon movement, which had previously noticeably decreased its activity. Along with it, the American media record a rise in the number of politicians supporting such theories.

Even more outlandish stories about “pedophiles, cannibals and chipization” were picked up in the Russian-language religious community. For example, a Christian activist from Sacramento, Elena Nikitskaya, is actively distributing videos in which she tries to convince her viewers of the “satanic” nature of testing and vaccination and the “danger” of 5G towers while advocating for protests “against a fake pandemic”.

Meanwhile, local media, citing the Sacramento Department of Health, report that a third of Coronavirus infections are tied to local churches and that one of them, founded by Russian-speaking immigrants, has become an epicentre of the spread of a dangerous disease.

However, in spite of all efforts, Russian propagandists have not managed to contain dangerous conspiracy theories in the right-wing radical “ghetto” – aimed exclusively at an American audience. In early May, the famous Russian film director Nikita Mikhalkov, in his author’s programme, announced that the Coronavirus vaccine being developed in the United States is nothing more than a “chipization” performed by Bill Gates to control people and reduce the world’s population. Authorities picked up on it on 2 May and it was hastily removed from airing on the Rossiya 24 television channel, but remained on YouTube, where it has had hundreds of thousands of views.

By supporting theories aimed at destabilising the US, the Kremlin opened Pandora’s Box in its own country. Latest research shows that similar theories, combined with Russia’s traditional anti-Western propaganda and the trend of mistrust towards the Government in recent months, has developed into an explosive mix.

Its consequence is a disbelief in the reality of the COVID-19 pandemic by a large percentage of Russians, which, in turn, leads not only to increased infections but also to the rise of popular discontent. And this is the inevitable price that has to be paid for attempts to destabilise other countries.