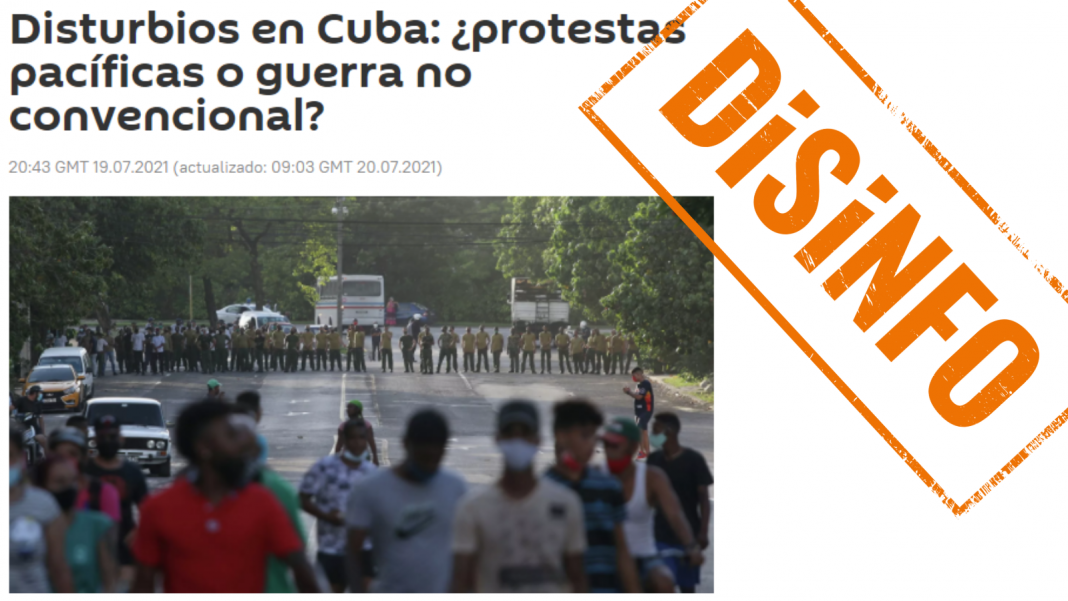 The massive protests broke out across Cuba on 11 July and caught attention of international media. For pro-Kremlin media, the peaceful demonstrations (and their crackdown) was just a Western-induced colour revolution.

The spokesperson of the Ministry of Foreign Affairs Maria Zakharova said it clearly:

“The logic is simple here. It has been tested on numerous occasions by Washington in various situations, but everything is one and the same mode of operation – instigating colour revolutions against undesirable regimes. At first, sanctions are introduced against them, and artificial problems are created or imposed from outside, which complicate the social and economic situation. On this basis, tensions are provoked, and anti-government sentiment is stirred up. When a critical mass is reached, the whole blame is laid on the national government. Labels are pinned on it, its activity discredited and thus the situation nears a collapse. There have been attempts to use the same scheme in Cuba.”

This, however, wasn’t the opinion of many Cuban citizens who took to the streets. A crippling economic situation and dwindling food supplies, worsened by the COVID-19 epidemic which seems out of control on the island, led many Cubans to express their dissatisfaction.

After the first protest in San Antonio de los Baños, near Havana, was broadcast live on Facebook, others followed suit. Demonstrations took place in at least 37 different spots on the island (with some counts elevating this figure to at least 58 locations), a remarkable development in a country where public dissent is strongly discouraged, if not persecuted.

The pro-Kremlin disinformation outlets also spun the “colour revolution” narrative in Italian, Spanish, Greek and Czech. Additionally, these protests were called an example of “unconventional warfare”, a “soft coup” and “hybrid warfare”.

As for the official line, the pro-Kremlin media helped to convey the messages of Cuban Foreign Minister Bruno Rodríguez, who day after day affirmed that the island is the target of a “macabre plot”, a “high-level communication operation” and a “political-communicational campaign of disinformation”.

Rodríguez not only accused the US government of the “shameless, obscene use of lies, smear and data manipulation”; he also attacked tech giant Apple and social media app Clubhouse for being tools for “counter-revolutionaries who took part in the riots”. He also accused Twitter of altering the geolocation system of the accounts that took part in the social media campaign, to look as those users were in Cuba when they were actually out of the country.

In addition to the claims that the protests were an US conspiracy, the political-humoristic YouTube channel Ahí Les Va [could be translated as “There it goes for you”] prepared a video to “explain” the protests. The host Inna Afinogenova, working a deputy director of RT’s Spanish-language website and a well-known influencer, went a step beyond narratives listed above.

She admitted that Cuba is in a dire economic situation, but mostly due to the US embargo thus repeating the official Cuban line. She also said the protests can be seen as legitimate, since they were mostly a reaction to the situation of scarcity, blackouts and a rampant epidemic. However, she claimed that the international media manipulated the events to make them seem like a political protest.

Reality is stubborn, though: practically all the videos from the protests (including the first live broadcast from San Antonio de los Baños) show how people were chanting anti-government slogans such as “Down with dictatorship”, “Freedom” and “We have no fear”. Demonstrators interviewed in other parts of the island had similar messages. The claim that the protests were merely economic and misrepresented by international mainstream media, as Afinogenova affirmed in her video, does not reflect the facts on the ground.

Both Cuban representatives and pro-Kremlin outlets insist again and again that calm prevails now in the country, which should be proof that these protests were the result of a failed plot that doesn’t represent the real feelings of Cubans. In reality, the authorities have silenced domestic criticism through a swift repression campaign, going door-to-door to arrest hundreds of people who took part in the demonstrations and whose whereabouts are still unknown in many cases, carrying out summary trials without due process, and sentencing them to years of imprisonment for participating in, or even just filming, the protests. For Cubans, the social explosion has been put out at the cost of further polarisation. For pro-Kremlin disinformation outlets, it’s just another day in the office.