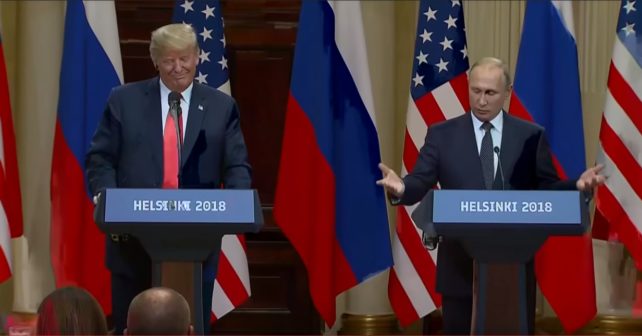 By Artem Velichko, specially for InformNapalm

Western political, intelligence and journalistic community erupted in understandably and justly very negative coverage of Donald Trump’s disastrous performance at the press conference in Helsinki. Former CIA director John Brennan even called it “nothing short of treasonous “. As the shocked world media kept all eyes on Trump, they overlooked a rare moment of Vladimir Putin speaking the truth, albeit inadvertently.

When asked by Jonathan Lemire of AP, what Trump had said to him about officially recognizing Crimea as part of Russia Putin offered the following response:

Vladimir Putin: President Trump sticks to a well-known position on Crimea. He speaks about the illegal nature of annexing Crimea to Russia. We have a different perspective on this. We believe that we helda referendum in strict compliance with international law and the UN Charter. This case is closed for Russia…

There is a truthful part in this answer. The referendum on Crimea joining the Russian Federation was effectively held by the Russian occupation authorities. However, it was not legal under any laws, international or Ukrainian for that matter.

Let us recollect a few facts connected to the operation of seizing Crimea. As far back as February 2014 Russian Federation started deploying a massive combined arms force to the territory of Crimea in violation of the international law, UN charter and a number of bilateral treaties, including among others, the Treaty on Friendship, Cooperation, and Partnership between Ukraine and the Russian Federation as well as the SOFA on the Black Sea Fleet.

According to the combined findings of Ukrainian intelligence agencies and InformNapalm volunteer intelligence community, at least 15 military units of the Russian Federation took part in the invasion to Crimea, among them special purpose, air assault, marine, infantry and even artillery units. Russia also deployed Cossack paramilitary groups as a policing force in Crimea. By mid-March 2014 all the Ukrainian military facilities were blocked or seized by the Russian forces, the majority law enforcers defected to the Russian side. Thus the entire peninsula came under the effective control of the Russian Federation and its proxies. This was the backdrop of the “referendum held in strict compliance…”.

Putin’s phrase went through an interesting evolution on kremlin.ru, the official website of the President of Russia. The initial version of the transcript in Russian was exactly the way Putin said it – with two times “we” leaving no room for interpretations. However later on the wording of the Russian version was changed, and the second “we” was redacted. In its current form, the Russian sentence could be translated into English using a passive construction, i.e. “We believe that a referendum was held in strict compliance with international law and the UN Charter.” This would totally change the meaning of the sentence.

At the time of writing, the wording on the English version of the site remained unchanged. It remains unclear why the editors of kremlin.ru chose to play with the Russian wording. Most probably for the sake of “correct” references by the domestic printed media.

Putin is not a very public politician, more used to dealing with the subservient “Kremlin pool” of journalists. When confronted with the irreverence of western or Ukrainian journalists he loses his cool and lets slip the things he would have probably kept to himself. Let us remember his answer to an irritating question about the possible war with Ukraine that he gave on 3 March 2014. Putin then de-facto promised that in case of any confrontation with the Ukrainian Army, Russians would use Ukrainian civilians as human shields https://www.youtube.com/watch?v=wHgnJy7ECb8. Russian troops delivered on this promise both in Crimea and then Donbas.

This phrase in Helsinki constitutes a court-grade unintended admission of guilt on the part of Vladimir Putin and of his personal complicity in the illegal invasion and annexation of Crimea. We appeal to the western journalists and policymakers not to let this “misspeak” go unnoticed.

By Artem Velichko, specially for InformNapalm