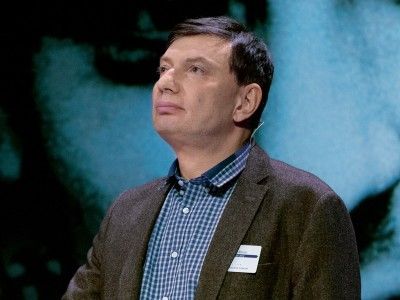 Most commentators have suggested that Vladimir Putin is supporting the Russian extreme right to force the governments of Germany and other European countries to lift sanctions against his country, Igor Eidman says; but in fact, Putin’s goals are “much more ambitious.” He wants to change the nature of European countries and of Europe, Paul Goble wrote for Window on Eurasia.

Eidman says, “to destroy its liberal foundations and to set it against European integration. Only after having changed Germany could Putin find a common language with it and make it his ally” (kasparov.ru/material.php?id=56C9C281DE474).

Moscow’s chief instruments in this effort include “propaganda of xenophobia, dirty information technologies, the export of corruption, and the buying off of elites.”

Until recently, “many leaders of European countries were friends of Putin,” but Chancellor Angela Merkel “showed from the very beginning that she would not make friends with the former Chekist,” at least in part because she is the only West European leader who grew up under communism and thus understands what her “Russian partner” represents.

Because of her resistance to him, Merkel is Putin’s chief target; and his “immediate goal is to achieve her retirement from office.” Unfortunately, “there are several categories of Germans who are helping Putin” in this effort: “deceived or false leftists, ultra-right ideological supporters of Putin, ‘pragmatic’ businessmen who for short-term profit are prepared to condemn their country to long-term problems,” and those who simply take bribes and payoffs.

“The strangest and most unnatural of these are the leftists,” Eidman says, given that they must know that “in Putin’s Russia rule all that the German leftists are struggling against in Germany and on a bestial scale: social inequality and the violation of labor rights, corruption and arbitrariness of the police, pollution by corporations and the seizure of free urban spaces, racism and homophobia, sexism and clericalism, an imperial foreign policy and militarism.”

A second category of “’Putin’s helpers’” are pragmatic businessmen, he continues. Their attitudes are not that surprising given that Lenin reminded the world that capitalists will always be ready to sell the rope that will hang them. Now, tragically, some business types are “prepared to sell Putin the rope he hopes to use to hang European democracy.”

When they oppose sanctions, these business people think that “they are simply defending the interests of German business. In reality, however, they are helping the Putin regime to stabilize the economic situation and to find the resources for expansionist activities in the international arena, for an ideological and information attack on democracy in Europe.”

The most active “friends of Putin” in Germany are “those who participate in projects paid for by Moscow” and thus do so for selfish interests. “The Russian authorities are buying up wholesale and retail German politicians, journalists and ‘experts.’ By corrupting the German elite, the Kremlin not only achieves loyalty to its policies but also changes Germany and destroys its democratic and law-based state.”

But in Germany there are many who support Putin because they share his views, Eidman says. These include in the first instance the far right. They would like their country to become like Russia today, and they often chant that “Merkel should be sent to Siberia, and Putin summoned to Berlin.” They and Moscow have been especially energized by the migrant crisis.

“In Russia,” Eidman concludes, “government propaganda long ago made liberalism and tolerance practically curse words. The Russian authorities are trying to promote the same attitudes in German public opinion. Merkel’s retirement is only an intermediate step for the Kremlin. It really wants Germany to become like Russia, “reactionary, clerical and xenophobic.”