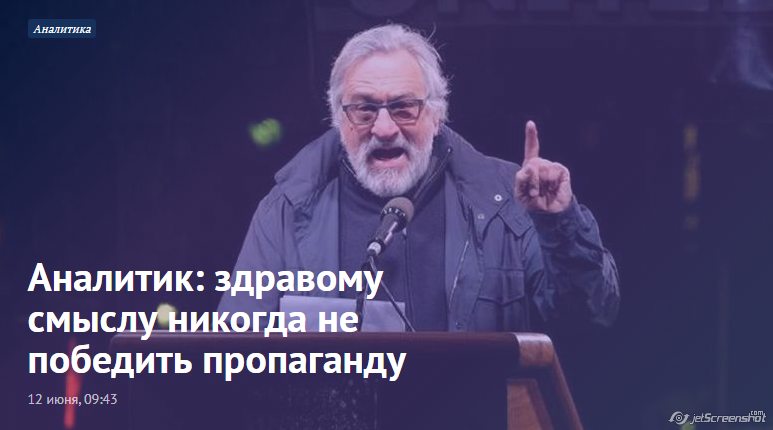 An anonymous commentator on Telegram’s Red Zion channel who was picked up today by Novyye izvestiya says that both Vladimir Putin and Donald Trump understand how and why propaganda works while their liberal opponents do not and thus the latter completely fail to recognize that “good sense will never defeat it.”

As a result of their failure to understand the nature of propaganda, he continues, “the attacks of liberal American society on Trump or of its Russian counterpart on Putin are not only useless but even destructive” (t.me/redzion/12522 published asnewizv.ru/article/general/12-06-2018/analitik-zdravomu-smyslu-nikogda-ne-pobedit-propagandu).

From a Russian perspective where the liberals are also far removed from the people, everything is clear, the Red Zion writer says.  But it isn’t for American liberals. “The US never before landed in a situation where the centrists were not in the majority in power and thus could not sell their point of view as the most authoritative one.”

“In reality,” he says, “Trump is a radical in all sense of the word, and the party has adjusted itself under him. For the rednecks and angry white people, truth is on his side regardless of whether his actions are absolutely in accord with his words.”

“Many American liberal activists up to now laugh over how stupidly Trump and his supporters put forward their point of view, inconsistently, constantly changing direction and denying the obvious. It would seem that even an amoeba would understand that something isn’t right.”

“But the white man in the street isn’t following facts, doesn’t compare them, and isn’t interested in logic.” He listens to FOX news and everything is clear: “investigations of Trump are a witch hunt, and besides, look at Obama and Clinton – they are the real criminals and no one touches them!”

As an aide to Joseph Goebbels, the Nazi propaganda minister, observed, “Propaganda is always directed only toward the masses and not to the intelligentsia. Therefore, its level must be oriented to the abilities of its acceptance by the most limited among those on whom it is intended to have an impact.”

“This principle is observed 100 percent of the time everywhere and always where propaganda works,” the Red Zion writer argues.

And that has consequences: “Good sense,” he says, “never defeats propaganda,” however often it is presented. “Still more destructive are attacks of this establishment on Trump (or if you like Putin),” given how much the white man in the street hates that group of people. Indeed, these attacks confirm for him what he is told and what he believes.

“Only a few understand that it is necessary to act in places where propaganda still doesn’t have an impact – in the area of social problems.” For Russia, this is already “useless” because the population has lost all faith in the opposition. But “there is still a chance in the US – everything depends on the candidates.”

The Red Zion writer says that it is worth noting “how rarely Bernie Sanders refers to Trump’s behavior and the investigations, focusing instead on the immediate problems of people.” Trump may be in power, but “people in choosing their representatives want to hear how their personal problems will be solved – and not about the problems of democracy as a whole.”