By Eilish Hart, for Global Voices

An electronic version of the Great Russian Encyclopedia would provide “reliable information,” says the president.

On November 5, 2019, Russian President Vladimir Putin convened the country’s language council to discuss, as he put it in his opening speech, “the war on the Russian language.” While much of the conversation concerned language norms at home, Putin also underscored the importance of “implementing an effective support system for the Russian language environment abroad, in the information, educational and humanitarian fields.”

In the same vein, Putin suggested replacing Wikipedia with an electronic version of the Great Russian Encyclopedia, which would provide “reliable information, presented in a good modern form.” Putin’s words have provoked a heated online debate about the accuracy of Wikipedia, and the accuracy of the Russian government’s replacement.

The president’s calls for a Russian online encyclopedia took place just days after the “sovereign internet” law came into effect on November 1. And in the context of the Kremlin’s ongoing internet crackdown (which includes recent laws banning “fake news,” “extremism” and “disrespecting state authorities” online, as well as a proposed bill to criminalize online “drug propaganda”), the idea of developing a state-approved digital encyclopedia appears to be one more attempt at controlling Russian-language narratives online.

For some Twitter users, the authorities denouncing Wikipedia was the best possible endorsement for the platform:

If Wikipedia did suck then the Russian authorities wouldn’t be trying to ban it, they’re used to lying and distorting historical facts. If Russia is trying to ban something that’s the best recommendation for regular people. The evil empire is fighting a battle against any manifestations of truth and good.”

Putin on Wikipedia: It’s better to replace it with the Great Russian Encyclopedia in electronic form.

Alexey Navalny, the prominent opposition activist and head of the Anti-Corruption Foundation, was particularly critical of the project and its cost. During one of his regular livestreams on November 7, 2019, Navalny referred to Russian Wikipedia as a “triumph of the Russian language and the Russian people,” pointing out that Putin is famous for not using the internet (doing all of his work on paper) and concluding that the Russian President doesn’t really understand Wikipedia, or for that matter the internet:

Putin’s never been on Wikipedia, he doesn’t know what it is… [He’s] a man who has never used the internet – he understands nothing about it and is working with equally clueless people… This guy is trying to destroy something he did not create.

With the “sovereign internet law” officially in effect, Navalny’s suspicion that the authorities were moving to “destroy” Wikipedia is not entirely far-fetched. As the Executive Director of Wikimedia.ru, Stanislav Kozlovsky, told Gazeta.ru, the idea of “replacing” Wikipedia (as Putin phrased it) is rather ambiguous:

It’s not really clear – what does it mean to replace Wikipedia? Blocking [it]? This nuance hasn’t been clarified. In general? We only want to get more sources.  It’s not clear whether this implies the destruction of everything else. It’s unlikely that Putin meant it as such. I hope.

Furthermore, it would be difficult to compete with Wikipedia’s Russian language platform, which is the seventh largest by number of articles. As Kozlovsky pointed out in comments to the popular online publication Gazeta.ru, Russian Wikipedia already has nearly 1.6 million articles online, while the Great Russian Encyclopedia only contains about 80,000 entries that are each one to two paragraphs in length.

In a comparison of entries on the two platforms, the BBC’s Russian Service also found some key differences in content. For example, while Russian Wikipedia has a wealth of information on the status of same-sex marriage in different countries around the world, the Great Russian Encyclopedia only includes one article on same-sex partnerships (not marriages), and underscores that they are neither legal or supported in Russia.

In this context, preventing access to the platform seems like the easiest way to “replace” Wikipedia. If the “sovereign Internet law” is implemented as planned, the authorities will soon have the technical ability to ban what they deem to be undesirable online content. The precedent has already been set: in 2015, the Russian government’s internet watchdog Roskomnadozor has briefly blocked individual articles from Wikipedia about certain types of narcotics.

Nevertheless, in a statement to state news agency TASS, Presidential Press Secretary Dmitry Peskov insisted that banning Wikipedia or limiting access to the site was “out of the question,” despite the fact that it’s an unreliable source:

With all due respect, no one guarantees all the information published and regularly updated on Wikipedia. Its accuracy and validity is not verified.

Some might argue that Peskov is right to question Wikipedia’s trustworthiness. In spite of improvements to the platform’s system of checks and balances and becoming stricter about sourcing in recent years, entries can be drastically different across languages. For example, while English Wikipedia has an article on the “Annexation of Crimea by the Russian Federation,” the Russian page concerns the “Accession of Crimea to the Russian Federation” (Присоединение Крыма к Российской Федерации) – a difference that is both linguistic and geopolitical.

Given Wikipedia’s crowdsourced model, there’s also little to protect the platform from attempts to use pages for political ends. Earlier this year, for example, independent news website Meduza reported that Wikipedia had blocked a group of Russian users for editing articles to include negative descriptions of opposition leaders and positive descriptions of local governors and their projects, ahead of local elections.

Furthermore, the Russian government has been known to make its own edits to Wikipedia. In 2014, @RuGovEdits — a Tweetbot that issues alerts whenever a Wikipedia page is edited from a Russian government IP address — flagged changes made to the article about the downing of Malaysian Airlines passenger flight MH17 just one day after the crash occurred in eastern Ukraine. On July 18, 2014, an IP address belonging to the state-owned All-Russia State Television and Radio Broadcasting Company (VGTRK) deleted text linking Russia to the Buk missile system that shot down the aircraft, rewriting the entry to reflect a popular Russian conspiracy theory that the Ukrainian military had shot down the plane. 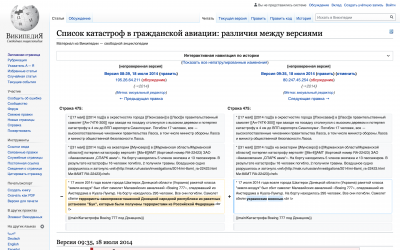 A Norwegian programmer then compiled a list of 6,909 anonymous edits made to Russian-language Wikipedia pages from IP addresses belonging to Russian state agencies between 2003 and 2014. But given that Russian-language Wikipedia has the fifth highest number of edits (nearly 103 million), manually editing entries to fit the government’s narrative would be an impossible task.

Therefore, building up the Great Russian Encyclopedia as an alternative “reliable” reference appeals to the authorities, as they continue their quest for greater technical and rhetorical control over the RuNet. As the well-known entrepreneur-innovator Georgy Vasiliev told the independent newspaper Novaya Gazeta on November 8:

On Wikipedia there is no editorial head, no person with the power to rule over another text. This is not an encyclopedia in the usual sense. One Wikipedia article can have hundreds of authors, and all of them have equal rights. In order to make changes, you have to convince your other collaborators. In this sense, the Great Russian Encyclopedia is a much more manageable publication.

In that sense, a move against Wikipedia reflects the Russian government’s aspirations for a RuNet managed from above, not from below. In a word, a more “manageable” internet.

By Eilish Hart, for Global Voices

This post is part of RuNet Echo, a Global Voices project to interpret the Russian language internet.