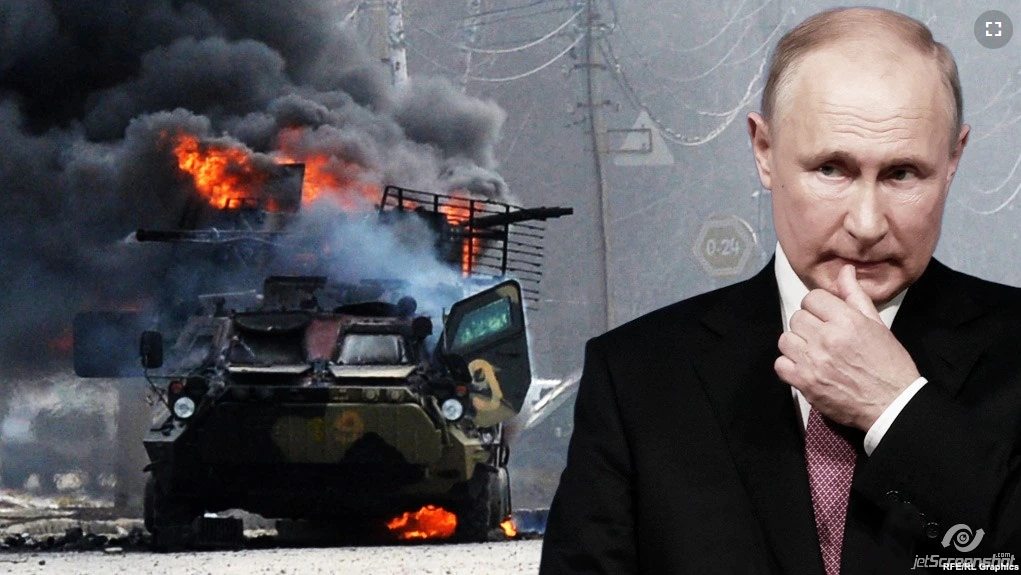 Russia’s President rolled the dice with his Ukraine invasion. Domestic support, currently at high levels, is about to wane and his options will soon narrow.

Support for Russian President Vladimir Putin and his ongoing full-scale war against Ukraine, according to sociological data, remains quite high. If we are to believe the pro-government sociological centers, his approval ratings have recently increased by a few percentage points. However, the Kremlin does not have enough resources to maintain such high ratings.

Independent sociologists agree that at least two-thirds (according to some sources, three-quarters) of Russians support the war (although some warn that these data cannot be completely reliable, because people are afraid to say what they think, for fear of criminal prosecution.)

Whatever level of acceptance state propaganda generates, it is clear that this percentage will begin to decline as the Russian standard of living worsens and military losses increase. Members of the Russian Anti-War Committee told the author of this article that sociologists see growing disillusionment with the so-called “special military operation” even in rural areas and small towns, where support for the war has traditionally been higher than in Moscow and St. Petersburg. The reason is that news about the deaths of young men from these areas spreads much faster in “compact” societies, where people personally know each other.

At the same time, Putin has diminishing resources left to strengthen his grip on power. Traditionally, the means of rallying Russians around a national leader has been to reinforce the idea of an external threat, that is, to create a constant feeling that Russia is surrounded by enemies. It’s this propaganda narrative that the authorities have successfully used for at least the last eight years, since Putin launched his first war of aggression against Ukraine. Even six months before the second invasion, 83% of the country’s population believed that Russia was surrounded by enemies, according to the Levada Center.

However, conjuring up supposed external enemies creates passive rather than active support for Vladimir Putin. People believing that Russia faces attack from foreign powers were not really inclined to protest against the government anyway. Many considered Putin a less-than-ideal leader, but saw him as the lesser of two evils. This approach was observed both before 2014 and recently in 2018-21. Yet this does not create an eagerness to launch foreign wars and make sacrifices, including large falls in living standards and the death or dismemberment of their sons.

Against this backdrop, the Kremlin needs military victories, before the contradictions in its own propaganda become obvious. We have already noted that Russian propaganda used two contradictory narratives. On the one hand, it’s trying to prove that the war in Ukraine was a forced step, and a “peace-loving” Russia simply had no other choice. On the other hand, propaganda did not hide the fact that Russia’s original goal was to destroy the existing world order.

This contradiction persists. Russian propagandists openly discuss whether it was more advantageous to invade Ukraine: now or in the more limited aggression of 2014. As a result, they concluded that, although Ukraine was weaker in 2014, Russia was not economically ready for such serious sanctions. Happily, they say, the state has better prepared itself for economic warfare over the past eight years. Thus, propagandists openly admit that Russia launched an invasion of Ukraine and planned to capture it even before propagating faked stories about nuclear or biological weapons in its neighboring state, the supposed “genocide” of the Donbas population, and other pretexts for aggression.

Most Russians do not reflect on these contradictions. However, the Kremlin has fewer and fewer resources to sustain the popular belief in a strong Russia, capable of defending itself and forcing the West to respect it. The failure of the Ukrainian “blitzkrieg” leaves Putin with few significant military victories to offer his electorate — after all, the 20 largest Ukrainian towns remain in government hands.

One of the options for the illusion of victory may be created through a compromise agreement with Ukraine. However, given the current balance of arms, with Ukraine actually able to launch some offensive military action, it’s extremely doubtful that President Zelenskyy and his team would agree to compromises of any significance. In addition, in the Russian information space, there is colossal opposition to the very idea of signing a balanced peace treaty. Representatives of the “party of war” have already dubbed Russia’s negotiating delegation “traitors to the army and the Supreme Commander-in-Chief”, and they are convinced that the implementation of any agreement is possible only after Ukraine’s surrender.

The second option would be to play on the anti-oligarch sentiment that was strong in Russia long before the start of the war. Now, the topic of reprisals against the so-called “systemic liberals” is being actively debated in Russia. Propagandists also claim that there is a group in the Russian government constituting a so-called “sixth column” – hidden traitors who have been working all these years for the West. In this imagined situation, the war is the only way to change Russia’s economic situation and finally solve the problem of “traitors in power.”

Putin feeds this idea. Speaking on March 16, he announced a new wave of repression, stating the need for a “natural self-purification of society” from “scum and traitors.” However, the search for traitors not among the ordinary Russians, but among officials and oligarchs, can not only keep people in fear, but also increase the government support by townsfolk. Moreover, reprisals against “hated oligarchs” can legitimize repression in the eyes of Russians, while without such legitimation, they can quickly begin to cause a negative reaction. Creating terror among the wealthy and the powerful serves a key secondary purpose; allowing the rooting out of those who might attempt a palace coup.

And that’s about it. The Kremlin dictator’s policy cupboard is far from full. Having gambled on a war that he poorly prepared for, Putin seems to have no other options for mobilizing the population — except for possible use of nuclear or other weapons of mass destruction.

At this point, Putin and Russia will have much more serious problems than the presidential rating.

Photo: Anti war protester holding a sign about to be detained, in Moscow, Russia, on February 28, 2022 during a demonstration against the war on Ukraine. Credit: Daniil Danchenko/NurPhoto.