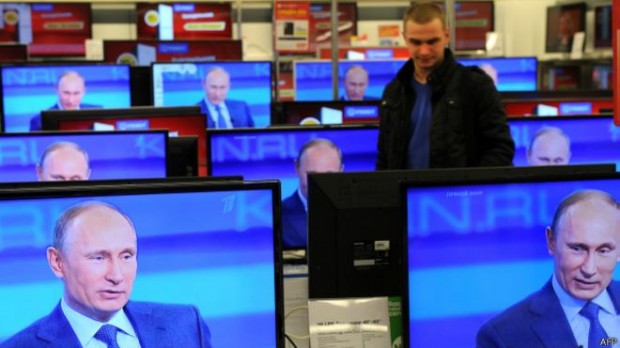 BBC Ukraine reports that Ukrainian television broadcasts have disappeared from viewer screens in the self-proclaimed People’s Republic of Donetsk.

They have been replaced by Russian and by regional channels operated by separatists (or, should I say, by their Russian puppeteers). Ukrainian efforts to reach viewers in occupied territories via more powerful signals and equipment supplied by Poland have been stymied by the fact that two thirds of viewers in occupied territory watch cable or dish-TV, which can only be serviced locally.

The BBC report does not mention a more subversive form of information sabotage – the operation of a counterfeit station that pretends to be Ukraine’s popular 1+1 channel. (I learned of this through unimpeachable sources, who for obvious reasons, do not want to be identified).

Here is how Donetsk’s “Potemkin 1+1” channel works: “Potemkin 1+1” carries the Ukraine 1+1 logo in the upper left hand corner. Gullible viewers believe they are watching broadcasts that originate in Kiev. Contrary to its published schedule of news, weather, sports, and entertainment, “Potemkin 1+1” broadcasts old movies, comedies, and other forms of light entertainment. There are no news programs, although the Kiev schedule calls for regular news breaks.

What do Vladimir Putin’s propagandists get from “Potemkin 1+1” by broadcasting only light entertainment?

Donetsk viewers wonder: What is going on? Does Kiev not know there is a hot war in our backyard?

The fake 1+1 programming leads viewers in war torn Donetsk to believe that the rest of Ukraine is indifferent to their suffering. They live without water; see their buildings destroyed and civilians killed, while Kievans and West Ukrainians sit around the TV enjoying soap operas and old comedies.

When Donetsk viewers turn to Russian and separatist channels, they are greeted with horrific images of ruined towns and villages, tall tales of young girls raped and murdered by crazed Ukrainian Nazis, and of indiscriminate bombardment from the west for the sole purpose of terrorizing the innocent civilian population of Donetsk.

Every now and then, Putin’s propagandists actually allow the direct translation of genuine 1+1 broadcasting to Donetsk screens — when it works to their advantage.

For example, Donetsk residents were allowed to watch the ceremony in Kiev honoring the “Heavenly Hundred” killed by snipers during the Maidan uprising. Why did Putin’s manipulators allow this coverage? Donetsk resident who have witnessed wanton death and destruction react to such images thinking to themselves: We have lost thousands and those ingrates in Kiev are mourning the loss of 100! They simply do not care about us.

Ukraine’s Prime Minister Yatsenyuk has formed a Ministry of Information Politics to counter this sabotage, but it faces an uphill battle. It is David fighting Goliath without a sling shot.

The BBC report raises an even more troubling specter. Russian sympathizers appear to be deeply embedded in Ukrainian telecommunications. They appear to have adopted a go-slow approach to sabotaging Ukraine’s efforts to reach occupied territories with their message.

The fact that the people of occupied Ukraine have been subjected to a non-stop one–sided propaganda war raises an even more troubling issue: Before the Russian invasion with “political technologists” and “self proclaimed supreme commanders,” the Ukrainian people paid scant attention to ethnicity and language background. Putin’s propaganda is driving a wedge through this reality. Even if Putin’s military adventure were to end in defeat for Russian forces and their allies, Ukraine would still be faced with the monumental problem of de-Putinizing the population of southeast Ukraine.

By Paul Gregory, The Blaze

Paul Gregory is a specialist on Russia, the Soviet Union and Ukraine. He is a Cullen Distinguished Professor at the University of Houston; a Research Fellow, at the Hoover Institution at Stanford University; has a PhD in Economics from Harvard; is a research professor for the German Institute for Economic Research; and a Board Member at Kiev School of Economics. He also blogs as Econworld on forbes.com.