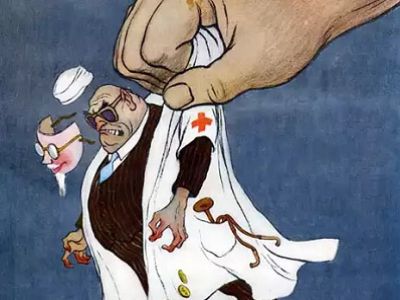 By Paul Goble, Window on Russia

Vladimir Putin’s “rabid” anti-Ukrainian propaganda resembles and is intended to have a similar outcome to Soviet state anti-Semitism, or “anti-Zionism” as it was called, Yevgeny Ikhlov says. And like the earlier one, Putin’s current one is about “killing off of another culture” and absorbing its bearers into a Moscow-approved effort.

The Russian commentator points out that “’anti-Zionism’ had many goals, but one of them was directed at the Jews and was designed to destroy their sense of identity. Jews were intended to stop feeling part of the Jewish people … and instead become ‘Soviet citizens of Jewish nationality,’ an ethnic minority” (kasparov.ru/material.php?id=59227F16BF2A8).

“The Soviet powers very much needed the Jews as experts, qualified workers in various spheres, and as promoters of Russification, in particular in Ukraine, Belarus, in the Baltics, in the Caucasus and in Central Asia,” Ikhlov says. “But for this, Jews had to be completely denationalized” and thus serve “the anti-Semitic regime.”

Some Soviet Jews were frightened into this by talk about revanchism in Germany or the prospects that the regime would not defend them against “popular anti-Semitism,” while others were attracted to this position by “the carrot” of being given at least “a quota-based integration into the establishment.”

In a similar way, Ikhlov says, “Soviet power very much needed the Ukrainians, an irreplaceable part of the apparatus.” But with the rise of Stalin, Soviet multi-national messianism was replaced by “an empire of a Bolshevik ‘khalifate,’” in which any nationalism was to be swallowed up by “the more customary model of Third Rome (neo-Byzantine) Muscovite rule.”

Over time, Ikhlov says, “the more people from the eastern oblasts of Ukraine, above all from Dneprpetrovsk, were recruited into the party apparatus, primarily into the ideological sector, the more efforts were undertaken for the russification of the Ukrainian intelligentsia, [Ukrainian] culture, and [Ukrainian] education.”

In the 1990s, after the collapse of Soviet power, the Russian political elite was divided between those who were prepared to accept the existence of a separate and distinct Ukrainian nation and those who simply wanted to continue as they had, working to support the integration of Ukrainians into a newly defined “Russian world.”

“But from the start of 2014,” Ikhlov says, “anti-Ukrainianism became just the same consensus between the powers and the ‘left-nationalist’ opposition as anti-Semitism united in the 1970s and 1980s the [Soviet] authorities and the systemic ‘Russian nationalist’ opposition.” In short, “great power hysteria broke out over Ukraine 45 years later than over ‘Zionism.’”

The “nightmare” years of Soviet attacks on Jews were part of his youth, Ikhlov says, and he recalled them in 2014 when people in Moscow recognized that the Maidan wasn’t going to fail. Since that time, he continues, he has often felt “the paradoxical” nature of the propaganda “directed at Jews and at Ukrainians.”

Putin’s current and ongoing efforts directed at “’the internal colonization of Ukraine’ are primarily [another] effort of its ‘culturecide’ and the liquidation of independence (democracy above all) and the transformation of Ukrainians into ‘Moskaly,’” a term that he points out initially meant a soldier in Russian imperial service rather than an ethnic Russian.

By Paul Goble, Window on Russia