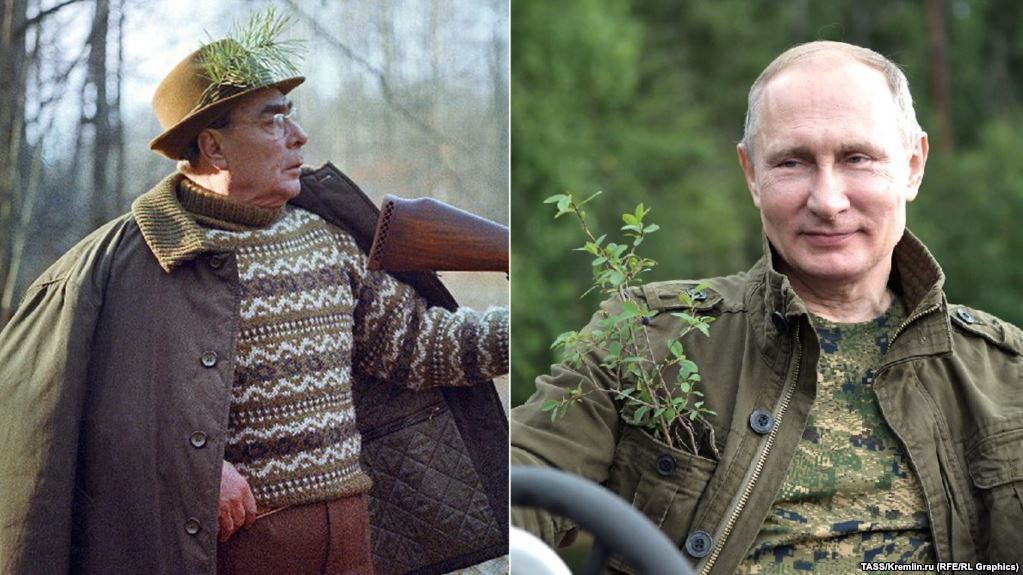 So, Vladimir Putin just had another Leonid Brezhnev moment.

Last year, the current Kremlin leader surpassed the longtime Soviet ruler in longevity in power. And now, after winning a fourth term with well over 70 percent of the vote, Putin has just matched Brezhnev in the number of times he was “elected.”

During Putin’s rule, Russian elections may not have become quite as choreographed as those stage-managed Soviet Communist Party congresses of old.

But they have become as predictable.

The 26th Party Congress in February 1981, Brezhnev’s fourth as Soviet leader and last before his death, unanimously “elected” the exact same leadership as the 25th Party Congress did five years before.

And just like those party congresses of old, Russian elections have turned into largely empty legitimization rituals in which everybody appears to be just going through the motions.

Back in 1981, Soviet television broadcast only 10 minutes of Brezhnev’s nearly five-hour keynote speech — with an announcer reading out excerpts from the studio.

Likewise, Putin’s fourth campaign for president has been notable largely for his lack of campaigning.

And as the results came in showing the expected landslide victory, he made only two brief appearances: one on Manezh Square near the Kremlin to lead a crowd in chants of “Russia! Russia!” and one at his campaign headquarters.

As rituals like Soviet party congresses and elections in Putin’s Russia get tired and stale, the authorities need to conjure up new ways to make them appear fresh and exciting.

Amid food shortages and declining living standards, Soviet authorities actually named a diamond — the largest ever discovered in the country and among the largest in the world — after the 26th Communist Party Congress.

And in the face of voter disinterest, Putin and the Kremlin elite sought to inject excitement into this year’s campaign by moving the date to coincide with the anniversary of the Russian annexation of Crimea and by allowing socialite and television personality Ksenia Sobchak to run for president.

And earlier this month, some of the most popular musicians joined up to produce the propaganda song Guiding Star to mobilize Russians to vote for Putin.

The comparisons only go so far.

2018, of course, is not 1981; today’s Russia is not the Soviet Union; and Putin is not Brezhnev. Choreographing a party congress is a different task than stage-managing an imitation of an election across 11 time zones.

But like the 26th Party Congress, Russia’s March 18 election needs to be examined as a ritual that offers signs and signals as to where the regime is headed.

In 1981, the Soviet regime appeared strong and the adulation for Brezhnev was effusive.

Geidar Aliyev, the Communist Party leader in Soviet Azerbaijan, managed to mention Brezhnev by name no less than 13 times in a 15-minute speech.

But the fact that Soviet television only broadcast a small portion of Brezhnev’s speech was a harbinger.

Throughout the congress, the Soviet leader was listless and impassive. The New York Times reported at the time that he neither smiled nor acknowledged “in any way the kudos heaped on him.”

He was clearly too ill to appear live on camera before the Soviet people for an extended period of time.

Less than two years later he would be dead — and the Soviet Union would enter its long death throes.

At 65 years old, Putin is nearly a decade younger than Brezhnev was in 1981 and he is by most accounts healthy. He even joked about living to 100 in remarks to supporters.

But there were other signs that, like the Soviet system that Brezhnev ruled, the Putin system is also decaying.

The Kremlin’s stated goal was to achieve a “70/70” result in the election — a 70 percent turnout and a 70 percent vote for Putin.

According to exit polls and early returns, they got the latter and then some.

But according to the Kremlin-connected VTsIOM polling agency, turnout was below 65 percent.

If that figure holds, it would suggests that the regime’s ability to mobilize the public is slipping.

Moreover, throughout the day there were reports of people being pressured to go to the polls and videos persistently appeared on social media showing flagrant ballot-stuffing.

Speaking on Aleksei Navalny’s YouTube channel, journalist and Kremlin-watcher Arkady Ostrovsky, author of the book Inventing Russia, said that almost nobody now believes in the legitimacy of Russian elections.

But the biggest sign that the Kremlin’s legitimization ritual was less than a smashing success came shortly before polls closed, when two opposition figures, Sobchak and Navalny, held an impromptu debate on Navalny’s YouTube channel.

The two had been sniping throughout the campaign, with Navalny, who was not allowed on the ballot, calling for a boycott; and Sobchak, who was and who won approximately 2 percent of the vote, trying to get voters to the polls.

Navalny accused Sobchak of doing the Kremlin’s work by legitimizing the election. Sobchak accused Navalny of dividing the opposition.

A presenter on Dozhd-TV described their heated exchange as “the most interesting thing that happened all day.”

Ostrovsky later said it foreshadowed what is likely to become “the main debate” in Russian politics: whether change will come from the opposition working within the system or by attacking it from the outside.

So like the 26th Communist Party Congress, on the surface the Kremlin’s legitimization ritual looks like a success.

But just like back in 1981, there is trouble looming beneath the facade.