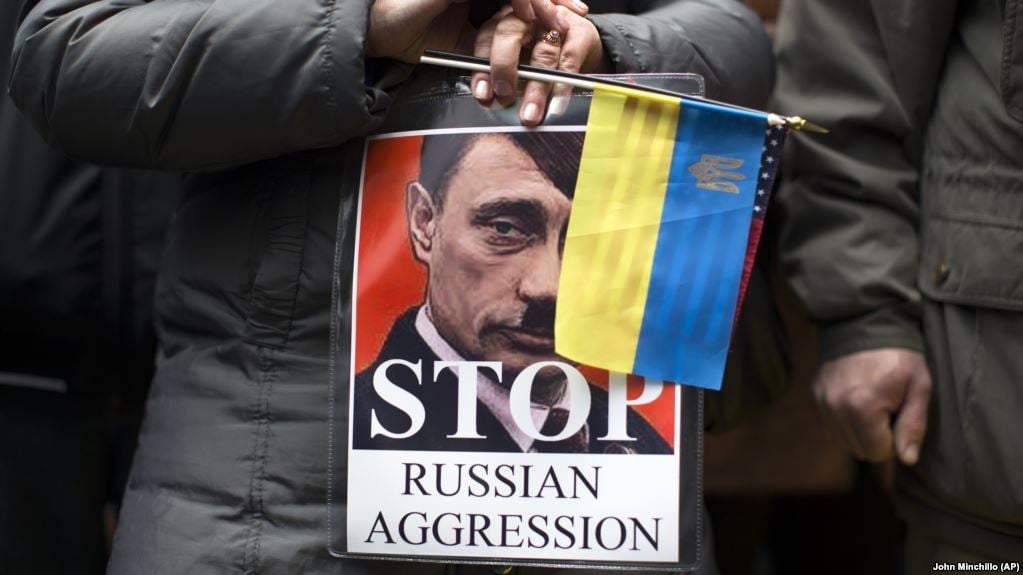 Vladimir Putin’s rhetoric about Ukraine has changed in order to curry favor with Russians in advance of the presidential poll, but his approach on the ground has not changed, laying a potential trap for Ukrainians and meaning that his “hybrid peace” is even more dangerous than his “hybrid war,” Vitaly Portnikov says.

There is the great danger that Ukrainians and their supporters elsewhere, the Ukrainian commentator says, will focus on what Putin says rather than on what he continues to do and thus decide that Kyiv should make concessions to someone who has made none except at the level of propaganda.

In the weeks between his televised meeting with the Russian people and his more recent meeting with media editors, Putin has changed his tone in comments about Ukraine in remarkable ways.  He is no longer talking about the need for regime change in Kyiv but instead about the requirement for improving relations between the two countries.

But “nothing in the situation around Ukraine has changed,” Portnikov ways. “What has changed is Putin himself, above all from the point of view of rhetoric.”  The Kremlin leader wants to present himself as a peacemaker because that is what the Russian people want given the burdens his military efforts have placed on them.

That does not mean that Putin is interested in “any peace” with Ukraine, the Ukrainian commentator says, but only that “the hybrid war which Putin has carried out against Ukraine for more than three years must be replaced with ‘a hybrid peace,’” something “much more dangerous than a hybrid war.”

On the one hand, a peace even of this kind will mean that hundreds if not thousands of people may survive the conflict who otherwise would not. But on the other, Putin’s goal now with his peace offensive as in the past with his military moves is to secure “the destruction of the Ukrainian state itself.”

The features of Putin’s “hybrid peace” are already clear: willingness to end military actions in the Donbass and even pull out Russian forces but no willingness to allow any foreign peacekeepers from entering that region. Moscow will insist that Ukrainian control will be restored after Kyiv fulfills the Minsk accords – in short, “not in the near future.”

Such ideas will win sympathy in Russia but more important in Germany, France “and possibly even in Washington.” That will create problems for Ukraine but so too will be the continuing Russian influence in part of Ukrainian territory, maintaining it as “a suppurating wound on the body” of the country.

While this is going on, many in Western elites will begin to insist on lifting sanctions on Russia: “If there is no war anymore,” then they shouldn’t be maintained. Still more, Ukraine should adapt itself to this new reality.  But that is only one part of the problem, Portnikov says. The other is inside Ukraine, as Putin fully understands.

“In Ukraine itself, ever more loudly are sounding the voice of htose who call for reaching an agreement with Russia and ‘listening’ to the Donbass: there is no war, and only ‘the ineffective and corrupt Ukrainian authorities, which justify their unwillingness to carry out reforms by referring to the conflict with Russia, are interested in confrontation.”

“Russia will spend enormous sums on Ukrainian politicians and the imitation part of ‘civil society’” both directly and via “their Western friends which live on the very same Moscow means.” That could affect the next Ukrainian elections, out of which may arise “a surprising bloc of open collaborationists and pseudo-‘patriots’” committed to a deal with Russia.

If that occurs, Portnikov says, “then the Minsk accords will finally be realized. The Donbass will become a state within a state. Crimea will disappear from the Ukrainian agenda. And the new president of Ukraine will go to Moscow fully ready to sell out Ukrainian sovereignty.”

This is Putin’s plan for “’a hybrid peace.’”  And it is critically important that Ukraine not fall into the trap the Kremlin leader is laying.  “It is very important to understand that peace will not be hybrid. In a hybrid war, real people die; but in ‘a hybrid peace, real states are destroyed.” Moscow has no interest in the survival of Ukraine.

What Ukrainians must remember is that the West pays attention to Ukraine only when it is fighting, Portnikov says. If it stops fighting to try to make a deal with Putin, the west will ignore it; and then Putin will win not one victory but two.