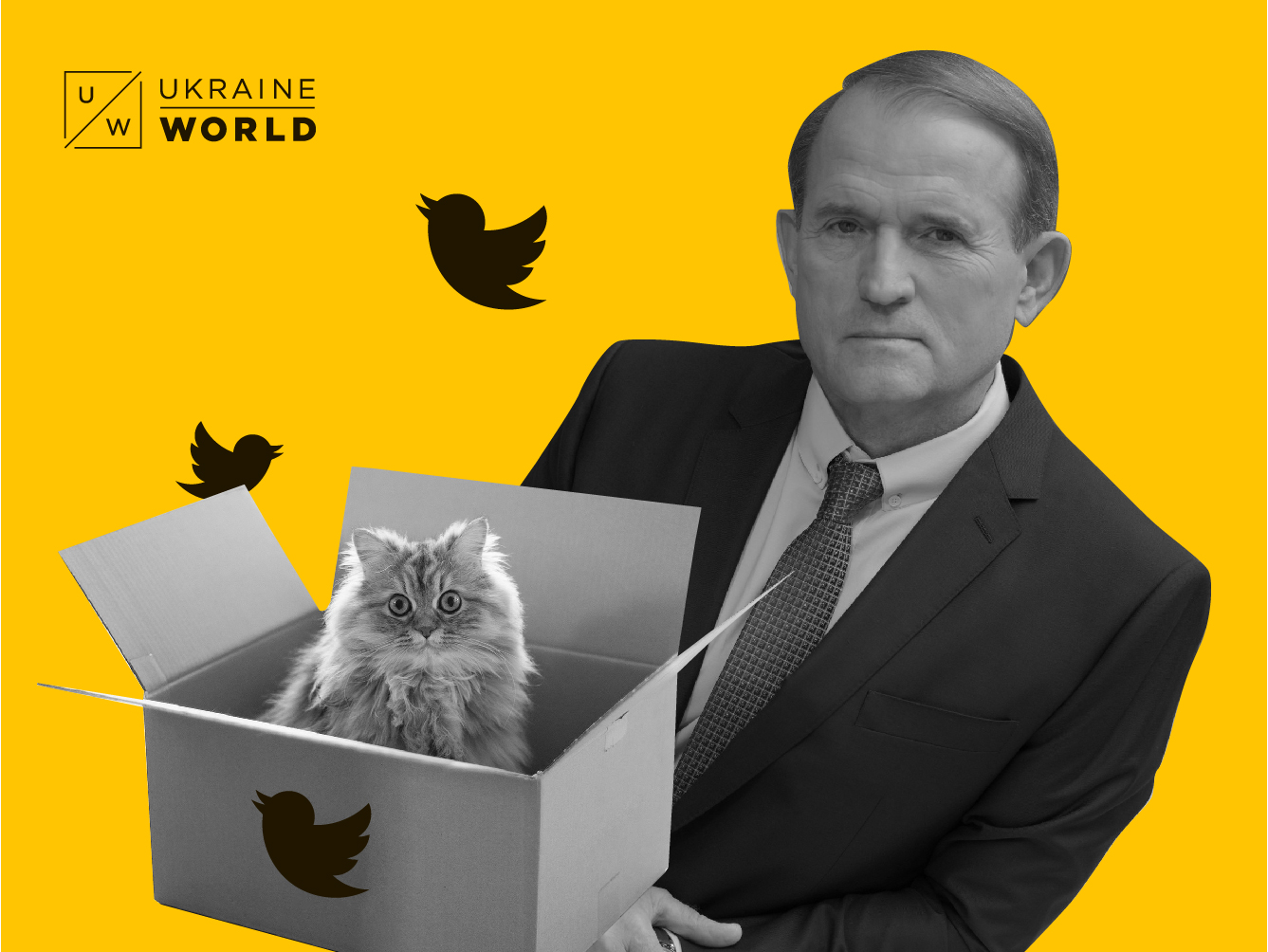 By Volodymyr Yermolenko, for UkraineWorld

Victor Medvedchuk, Vladimir Putin’s key ally in Ukraine and the leader of the pro-Russian “Opposition Platform For Life” party, has very likely been using a huge troll army on Twitter. UkraineWorld digs into his hidden brigades of online warriors.

Victor Medvedchuk is a well-known name in Ukrainian politics. He was the head of the presidential administration (2002-2005) under President Leonid Kuchma. He is probably the closest Ukrainian to Vladimir Putin – in 2004 Putin became godfather to Medvedchuk’s daughter, Darya. His public life goes way back — in 1980, he was the state-appointed attorney of Vasyl Stus, a prominent Ukrainian dissident poet and a  symbol of Ukrainian resistance during Soviet rule. In his book about the process, Ukrainian journalist Vakhtang Kipiani argues that Medvedchuk helped the prosecution in this process instead of his own client.

In 2012 Medvedchuk founded the”Ukrainian Choice” (Ukrainskyi Vybor)  movement . This movement, using ostensibly ‘pro-Ukrainian’ slogans, pushed forward strong anti-European messages, saying that EU integration would lead to rising prices, unemployment and same-sex marriage. It called on the country to “halt association with the EU” “and instead join Russia’s Customs Union. The movement led up to President Viktor  Yanukovych’s notorious November 2013 u-turn away from  signing the Association Agreement with the EU, which he had been imminently set to sign after years of negotiation. This sparked the protests that culminated in the Revolution of Dignity, a Ukrainian uprising which expelled the corrupt Yanukovych from  the country in February 2014. Medvedchuk’s time seemed to be over.

He was not, however, down and out yet. Medvedchuk quickly returned to the Ukrainian political stage. He is now the key actual leader of the “Opposition Platform For Life” (OPSZ), the leading pro-Russian party in Ukraine. The party has increased its popularity since last year, boosting its rating from 13% to between 16 and 18%. He has become a true oligarch, owning (in partnership with his wife) assets worth USD 133 million, according to assessments by NV.ua and Dragon Capital. These assets increased by 70% between 2018 and 2019, which is among the highest growth rates among Ukraine’s richest people. Medvedchuk’s business is closely linked to Russian sources.

What is he doing with all this money? He seems to have put the  bulk of it into his media empire. It now includes news TV channels 112 Ukraine, NewsOne and Zik, allegedly linked to Medvedchuk through his political partner Taras Kozak. Medvedchuk’s loyal media outlets broadcast anti-Western rhetoric non-stop (look at our reports), thereby aiding Russian soft power in Ukraine.

TV is not the only tool used by Medvedchuk to expand his audience. He is also very active on social networks.

However, not all of his social media audience is real. Indeed, the bulk of it is composed of fake fans and troll armies.

He used to have many more.

But in July 2018, he lost over 311 thousand followers, according to statistics provided by SocialBlade.com

This huge drop of followers was the result of a crackdown by Twitter on trolls and bots, especially  Russian ones, in which the site banned a total of around 70 million accounts.

The Washington Post reported that “Twitter’s growing campaign against bots and trolls… is part of the continuing fallout from Russia’s disinformation offensive during the 2016 presidential campaign, when a St. Petersburg-based troll factory was able to use some of America’s most prominent technology platforms to deceive voters on a mass scale”.

Other accounts of Russian and pro-Russian politicians and media also experienced huge losses in followers during Twitter’s purge of suspected inauthentic accounts. For example, RT (@rt_com) lost almost 45 thousand followers in July 2018. Even the official account of the Russian president lost over 9 thousand followers. But even that can’t compare to the scale of Medvedchuk’s loss of  300 000 followers, representing the majority of his Twitter following!

If Medvedchuk’s “fake fans” accounts had not been deleted, he would currently have almost half a million followers, most of them most likely Russian bots or trolls.

IT’S NOT OVER: MEDVEDCHUK HAS CONTINUED USING PRO-RUSSIAN TROLLS

Despite the dramatic decrease in followers in 2018, Medvedchuk’s use of troll armies persists.

These users have profile pictures and background photos taken from the internet, and they follow each other and pro-Russian bloggers and politicians.

We analyzed over 200 recent followers of Medvedchuk’s account with the help of Botometer, an online service which identifies probable bots among Twitter followers. Our analysis shows that 61% of the accounts which follow Medvedchuk’s Twitter profile have a score 2,5 or higher, putting them under suspicion of being bots, trolls, inactive or empty accounts. Only about 39% of the analyzed accounts are likely to be “normal” users.

This data prompted us to look deeper into Medvedchuk’s “fake fan” battalions.

To learn more about his network of followers, we dug into some of Medvedchuk’s posts.

For example, we chose one post where Medvedchuk raises the issue of secret “biological” or “bacteriological” labs which, he says, the US created in Ukraine and other Eastern European states to carry out experiments on humans and to create biological weapons.

This particular post had 27 retweets when we analyzed it. It now has 26 retweets, since one of the accounts (@6cuCGiJ7nHUZJHR) which had retweeted the post was suspended since then due to violation of Twitter rules.

Almost all of these accounts which retweeted this particular Medvedchuk’s post are likely to be bots or trolls; 23 out of 27 (85%) had practically no authentic activity.

85% of accounts which retweeted Medvedchuk’s “biolabs” post are likely to be trolls or bots.

They almost never tweet on their own, but rather only retweet, and do so very regularly. They also have unusual Twitter handles and mostly abstract or stolen pictures. All this leads us to conclude that are most likely bots or trolls.

Out of the remaining four accounts, one belongs to Medvedchuk’s “Ukrainian Choice” movement (@vyborua); two belong to real people living in Russia, and only one might belong to a real person living in Ukraine.

We also found a strange pattern in studying these accounts.

Some of Medvedchuk’s fans — those who retweet him or follow him — have a strange “passion” for pets. They either have kittens / puppies on their profile pictures, or frequently post pictures with these animals.

This also suggests to us that we are dealing with bots or trolls: it’s much easier to put a “kitty” on a profile picture than to find a human face which would not be immediately identified as stolen from someone else by fact-checkers.

Let’s take a look at some of the accounts which retweeted the “biolabs” post.

By collecting these related accounts, we can also check if these accounts follow Medvedchuk using the  service DoesFollow.

Surprisingly, quite a large number of accounts in this “pets” network do follow Medvedchuk’s account on Twitter. We manually collected a short list of these followers, assuming that the scale of the full network is much bigger:

There are several common traits among this little ‘battalion’ of a bigger army of accounts who follow (and often retweet) Medvedchuk:

For example, there is an account @ElenaNovorossia, containing the term “Novorossia” — the Russian project to annex all ofSouthern and Eastern Ukraine. @Vanechka132 has the slogan Люблю Родину Россию — “I Love Motherland Russia”. @xpyctaluk has its slogan as “Русский не тот, кто носит русскую фамилию, а тот, кто любит Россию и считает её своим отечеством” (a Russian is not one with a Russian surname, but one who loves Russia and considers it as his  motherland. Some of these “kitten” accounts show their geolocation: for example, @Lalalupsja indicates Siberia; @foxie_alice puts “Taiga, Russia”; etc. One of the biggest Medvedchuk fans in the network, which retweets majority of his posts, @LKxwd, with the most unimaginative name Imia (“Name”) has as his profile picture a photo of “little green men” from the Russian annexation of Crimea, with the slogan “Polite People Don’t Make Noise” — making clear reference to the “little green men” called “polite people” by Russian propaganda.

Others have photos of Putin, symbols of Russia, St George ribbons (a favorite symbol of pro-Russian separatists), and other signs of Russian nationalism.

There is further proof that this “kitten” troll army, mostly integrated within the Russian or pro-Russian information discourse, is helping Medvedchuk boost his messages on Twitter. We found another group of the “kitten” accounts linked to that troll army (Twitter’s “You Might Like” section associates them with those accounts we examined above).

For example: @zloj_koto_zwer has recently retweeted three of  Medvedchuk’s posts, but does not follow him.

It is clearly a troll / bot: it contains a human face picture, but it is stolen from the Internet. You can find it on Pinterest, for example.

It does not follow Medvedchuk. It has only 134 followers, but among this small number of followers, there are followers of Medvedchuk: @SollyZero, @vC4dxJ7oMXv1Rpq, @Vanechka132, @sarkits, @Kukharenko_IA (the latter account  regularly retweeting Medvedchuk, withat least 4 posts recently). This is another proof of connectedness of the “kittens” network between each other.

Another important point is that the accounts of the “kitten” network are usually very prolific in terms of their activity, but they rarely (or never) post their own content. Instead, they relentlessly retweet.

These trolls are tweeting between 40 and 300 tweets per day.

Obviously, real users are highly unlikely to tweet – even to retweet – with such frequency and commitment. The work of these accounts appear to be the result of a different kind of fastidious work –  coordinated action of the accounts, created or hired to perform specific tasks.

Victor Medvedchuk is becoming a powerful player in the Ukrainian politics. His party has huge financial resources and is pouring them into a big campaign to discredit Ukraine’s pro-European and pro-Western course. His aim is to bring Ukraine back to Russian sphere of influence.

Besides his expansion into the Ukrainian TV sector, he is also active in social networks. Our analysis exposes a network of trolls / bots distributing his messages — a battalion in what could be a huge troll army which is pushing anti-Western and pro-Russian narratives in the Ukrainian media.

This is a battalion in a huge troll army which is pushing anti-Western and pro-Russian narratives.

This troll army consists of fake fans who are incredibly prolific, relentlessly retweeting (some are making several hundreds posts per day on average, for years), and broadcasting  clearly pro-Russian and pro-Kremlin rhetoric.

These armies multiply the effect of anti-Western content and make it more visible on social networks to other users, who  would not usually fall into Medvedchuk’s usual target group.

It seems that the goal of this endeavor is not to inform but to influence, to win attention, with an eye towards regaining power and  bringing Ukraine back into the Russian sphere of influence.

By Volodymyr Yermolenko, for UkraineWorld

Truthers Against Tragedy: How Kremlin Fans Are Trying To Discredit the MH17 Investigation On Twitter

What Makes Fake News Feel True When It Isn’t? For One Thing, Hearing It Over And Over Again