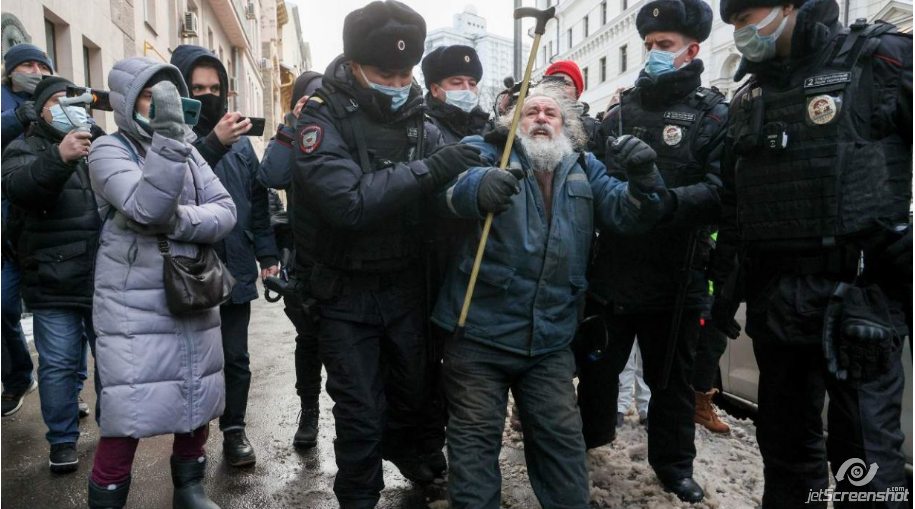 Vladimir Putin’s state is granting itself ever-greater freedom both abroad and at home; losers include the Russian people.

There are few themes more obvious in President Vladimir Putin’s public utterances than his nostalgia for the Soviet Union. Much of the world might have cheered as the decrepit old regime and its failed ideology crumbled and collapsed from 1989-1991, but the then KGB lieutenant-colonel was not among them.

No one should doubt that Putin seeks to revive what he images to have been the glory — and the geographical reach — of the Soviet Union. As the United States and Europe started negotiations with Russia this week over escalating threats of a further invasion of Ukraine and NATO’s supposed plans for an attack, the West should understand the mindset it confronts.

It is an unwelcome truth that modern Russia is a corrupt and malevolent power that draws from the wellspring of the Soviet Union’s bloody history to inspire its revisionist successor. A revanchist Putin believes his legacy will be to restore Soviet territorial losses, even — or especially — when his neighbors have long moved on and are establishing democratic systems valuing human rights and freedom. If there were any doubt about this after the deployment of Russian troops and self-described peacekeepers to Georgia, Crimea, and Donbas, we need only to look to the Russian paratroopers now flying into Kazakhstan to help crush what appears to have been a popular uprising.

On the domestic front, things are no better (and are barely noticed abroad.) The domestic crackdowns began slowly at first, and have drastically escalated over the past year with many independent media being labeled “foreign agents” and restrictions imposed on their reporting freedoms. Some have closed. Opposition figure Alexei Navalny was sentenced to jail after being poisoned by the military-grade nerve agent, Novichok, previously used by Russian military intelligence officers in the UK.

Over the past year, opposition figures, human rights leaders, and journalists have had to flee Russia after being threatened with lengthy jail sentences, as Putin’s crackdown intensifies. The Russian press regularly reports new detentions and there has been an increase of people falling out of windows, including one recent case where a fraud suspect from the fourth floor Interior Ministry window after giving evidence of murders being committed in the interests of a local businessman. Healthcare workers have also fallen victim since the pandemic began.

Something even darker and grimly reminiscent of Soviet practices has also been occurring over the past few years. During the Brezhnev era, a mental disease known as “sluggish schizophrenia” emerged and was applied to political dissidents expressing politically unacceptable views. They were thrown into mental institutions and treated with massive doses of psychiatric drugs meant to punish people, deter others, and as a means to discredit their ideas. Recent years have seen the return of such reports. A regional deputy in Primorsky was admitted into a regional clinical psychiatric institution after accusing the governor of corruption and bribery.

An activist who frequently demonstrated in Red Square, demanding to be taken to Ukraine and granted Ukrainian citizenship, was held in a psychiatric hospital during his last arrest in April 2021, while awaiting trial. According to Andriy Us, he was given a “political diagnosis” of schizotypal personality disorder. And most recently, a history teacher who complained to Putin about low wages for teachers was fired with a recommendation that he “undergo treatment in a mental hospital. This, of course, is in addition to multiple scores of unsolved deaths of opposition figures, including journalists, that has been a feature of the Putin years.

Opposition groups are meanwhile assailed on a scale unknown in this century. The human rights group, Memorial International, initially led by Andrei Sakharov, which gathered evidence and documented the millions killed by Stalin’s regime, was closed by Russia’s Supreme Court as a foreign agent. The organization had “mendaciously portrayed the Soviet Union as a terrorist state,” it stated.

What gained little notice on the same day as Memorial was forced to shut, were comments made by Chairman of the Constitutional Court Valery Zorkin about the potential reinstatement of the death penalty. He made this argument in his new book “Constitutional Justice: Procedure and Meaning,” which was published on the court’s website. “The fact that the Constitutional Court made a decision making it impossible to use the death penalty in Russia at this historical stage of its development does not exclude the possibility of returning to this punishment in the future,” Zorkin said. Shortly afterward, State Duma Deputy Sultan Khamzaev from Putin’s United Russia party, said the death penalty needs to be reinstated for pedophiles, repeat offenders, and murderers.

Russia suspended the death penalty in 1997 as a condition of its entry to the Council of Europe. It had been used in the most egregious manner — Stalin and his henchman Molotov signed 3,167 death warrants on a single day in December 1937. Nikita Khrushchev used it rather less frequently for economic and violent crimes. There was never a clear accounting of the yearly executions carried out during the later Soviet years, but Western experts put the estimate at around 2,000 annually.

Russia is returning to its past. A Levada Center opinion poll last year showed more than half of all Russians fear the return of old-style repression and brutalization. The rest of the world should fear it too.