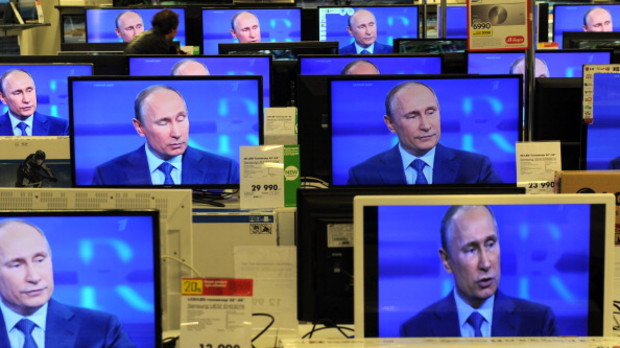 “One does not economize on ideology” — so, according to historian Roy Medvedev, went a favorite saying of Mikhail Suslov, the man responsible for maintaining the purity of Marxism-Leninism in 1970’s Soviet Union. While high oil prices held, Russian President Vladimir Putin acted in full accordance with this adage, building an expensive, powerful propaganda machine to bolster support for his policies at home and abroad. Now, however, the Putin ideological apparatus — both its public and private tentacles — is suffering ruthless cost cuts. For all its Soviet nostalgia, Putin’s Russia is a quasi-capitalist corporation, after all.

Last year, the state news agency, ITAR-TASS went back to its Soviet brand, simply TASS — once short for “the Soviet Union’s Telegraph Agency”, now a standalone acronym like BP  — and adopted the proud slogan “We know.” Ramzan Kadyrov, the fiercely pro-Putin leader of Chechnya, went so far as to name a mountain peak in the Caucasus after TASS. But yesterday, the agency, which had just two years ago tempted many private media journalists with salaries only an oil monarchy could pay, announced a 25 percent staff cut and a 20 percent salary cut. Those who refuse to take it are offered five times their monthly salaries to quit immediately.

Sergei Mikhailov, the veteran spin doctor who became TASS director general, brusquely explained the cuts by saying the team had failed to achieve “a global breakthrough in terms of both quality and quantity.” “We put out, on average, one news item per two employees, it costs no less than 3000 rubles ($47) to produce, and we have very little exclusive, much-quoted information,” the news site Meduza.io quoted Mikhailov’s memo on a TASS internal site as saying. “We still follow news trends rather than form them.”

TASS is only the latest propaganda outlet to make cuts. The government-owned Rossiyskaya Gazeta, which holds the monopoly on the official publication of new laws and government decrees, is letting go 10 percent of its staff. News Media, the holding company that runs a number of media assets for Putin’s close friend Yury Kovalchuk, decided to cut between 15 and 30 percent of its staff, including 15 to 17 percent of the employees of Lifenews, the TV channel that has carried some of the most powerful domestically-targeted propaganda on the Ukraine crisis.

Faced with a steep drop in oil revenues, the Russian government is sequestering the 2015 budget to cut spending by 10 percent. Government-financed media are not exempt from the cut. Last week, they received official word from the finance ministry that their funding will be reduced by 10 percent. This concerns the national TV channels and Russia Today, the entity that runs a Russian-language news agency that competes with TASS, a Russian radio station and an international TV operation under the RT brand.

Six months ago, RT had been promised a 30 percent increase to its 2014 budget so it could start broadcasting in German and French. Now, the 2015 allocation, 15.4 billion rubles ($240 million), will be cut by 10 percent. RT is still getting more money than last year, but the ruble’s sharp devaluation in recent months means that the dollar value of the subsidy has decreased by 46 percent. That’s important for RT because it works in foreign markets and hires foreigners. According to RT editor Margarita Simonyan, about 80 percent of the operation’s expenses are in foreign currencies. Plans for the German and French versions will probably be scrapped, Simonyan told the daily Vedomosti, at least for this year.

At the same time, the Russian Communications Ministry is setting tougher goals for Russia Today to justify the subsidy. In Russian government programs, future disbursements depend on how the subsidy recipient meets key performance indicators — see, Russian government managers have been to business school! So a new version of the “Information Society 2011-2020” program, under which Russia Today is funded, requires RT to have an audience of 640 million, up from 630 million in the previous version. If the program is approved, Russia Today will also need to make sure that its work is cited 13,500 times by foreign media, compared with 7500 times planned for 2014.

The problem with these KPI’s, of course, is that when foreign media cite RT, they don’t use it as a source of information, regardless of the the media platform’s goal of “forming an objective image of Russia abroad.” Rather, RT quotes are used as samples of Russian propaganda, or sometimes to convey the Kremlin’s official views. It appears not to matter to Kremlin ideologues, however: They just want to make sure their point of view is out there.

“The aim of this new propaganda is not to convince or persuade, but to keep the viewer hooked and distracted, passive and paranoid, rather than agitated to action,” Peter Pomerantvev and Michael Weiss wrote about Putin’s domestic propaganda in their recent paper, “The Menace of Unreality: How the Kremlin Weaponizes Information, Culture and Money.”

The creators of the Russian propaganda machine assumed this approach would work for European and U.S. audiences, too. That was too audacious an assumption.

For about 90 percent of Russians, television is the primary source of news (compared with 69 percent of Americans), and when television is state-controlled and every channel projects the Kremlin’s views, the effectiveness of propaganda is assured. In the West, RT, with its potential audience of about 600 million, is one of a number of relatively small media outlets. It will never be an effective weapon in the Kremlin’s perceived information war unless the audience is bombarded as regularly and thoroughly as it is within Russia.

Even in the fat years, Russia could not afford to inject enough cash into the propaganda machine to have a serious impact in the West. Now, the Kremlin is unwilling to spend much of its dwindling foreign currency reserves on what amounts to a vanity project. As for the domestic theater of the information war, opposing views have been marginalized so effectively in Russia that the propaganda outlets can cope with their job even on a tighter budget, with fewer staff. The journalists who were tempted with above-market pay two or three years ago, and who are now being tossed unceremoniously into the street in the midst of an economic crisis, will now realize they were only needed to help plow over the previous media landscape and establish the government monopoly on information. Now, their job is done, and the Kremlin’s generosity is, too.