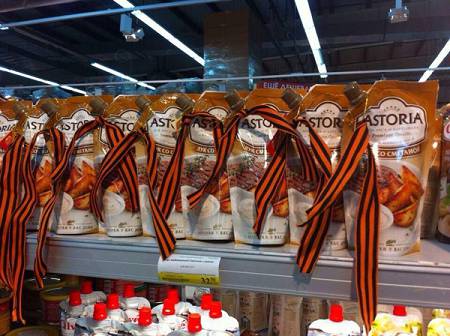 Vladimir Putin’s attempt to use the Soviet victory in World War II to legitimize himself and his regime reflects not the strength but the weakness of his position, given that Victory Day as it currently exists in Russia is “one of the weakest elements in the arsenal of Putinism,” according to Dmitry Zapolsky.

The Russian opposition journalist who was forced to move to Finland says that “’the great victory over fascism’ in the present-day Russian Federation plays the role of an almost official religious cult” but it remains “an open question” how deeply anyone believes in it (rusmonitor.com/dmitrijj-zapolskijj-skrepa-pobedy-odna-iz-samykh-slabykh-v-arsenale-putinizma.html).

According to Zapolsky, “the Putin regime suffers from a terrible complex of incompleteness: it doesn’t have legitimacy” and can’t come up with an adequate answer as to why the Russian Federation should exist, “what unites North Ossetia with Kalmykia, Sakhalin with Tyva and Petersburg with Yakutia.”

Of course, the Russian language in part connects them, but language is far from the unifier many assume. Many countries speak English, and so there is no reason why many can’t speak Russian. Orthodox Christianity doesn’t work either not only because of its NKVD origins but also because there are so many Muslims, Buddhists, Protestants and atheists in Russia today.

Hence the temptation to use World War II when all fought together to justify the existence of the Russian Federation and the Putin regime, Zapolsky says; but doing so raises many questions about Stalin, the costs of Soviet participation – more than 40 million dead — and the “pyrrhic” nature of “the victory” and its consequences..

Indeed, Zapolsky argues, invoking the Soviet victory in his support is “one of the weakest things in the arsenal of Putinism.” That is shown by some of the most absurd and outrageous sloganeering on this holiday, including the idea of going again “to Berlin.” Just which Berlin are you talking about? And “what will you do there? Steal from the stores?”

The outcome of World War II was to give the world a chance to resolve many of its conflicts without wars, the journalist says; and thus talking all the time about using force is not only dangerous but undermines what that earlier conflict was about. One can’t “repeat the success of the barbarians who destroyed the Roman Empire … Europe is much more stable.”

And when one considers how many Soviet citizens died, in many cases because of the mistakes of Stalin, Zapolsky continues, one is driven to recall the 1994 war in Rwanda between the Tutsi and the Hutus. Over there months, that conflict cost a million lives. The Tutsi came out on top despite losing 900,000 of its own.

But given such losses, Zapolsky says, it is impossible to imagine that “after 70 years, through the streets and avenues of Rwandan cities will walk under bold slogans of ‘the immortal Tutsi regimen,’ with pictures of who knows what people” carrying the weapons that they used in that bloodbath. Unfortunately, what Putin is having Russians do now is analogous.

If the Kremlin leader were to reflect on things, he would see that there are many other notions that would work better for his purposes because “every failure finds for himself explanations for his problems in the actions of those around him.” But facing up to those realities seems quite beyond Putin.