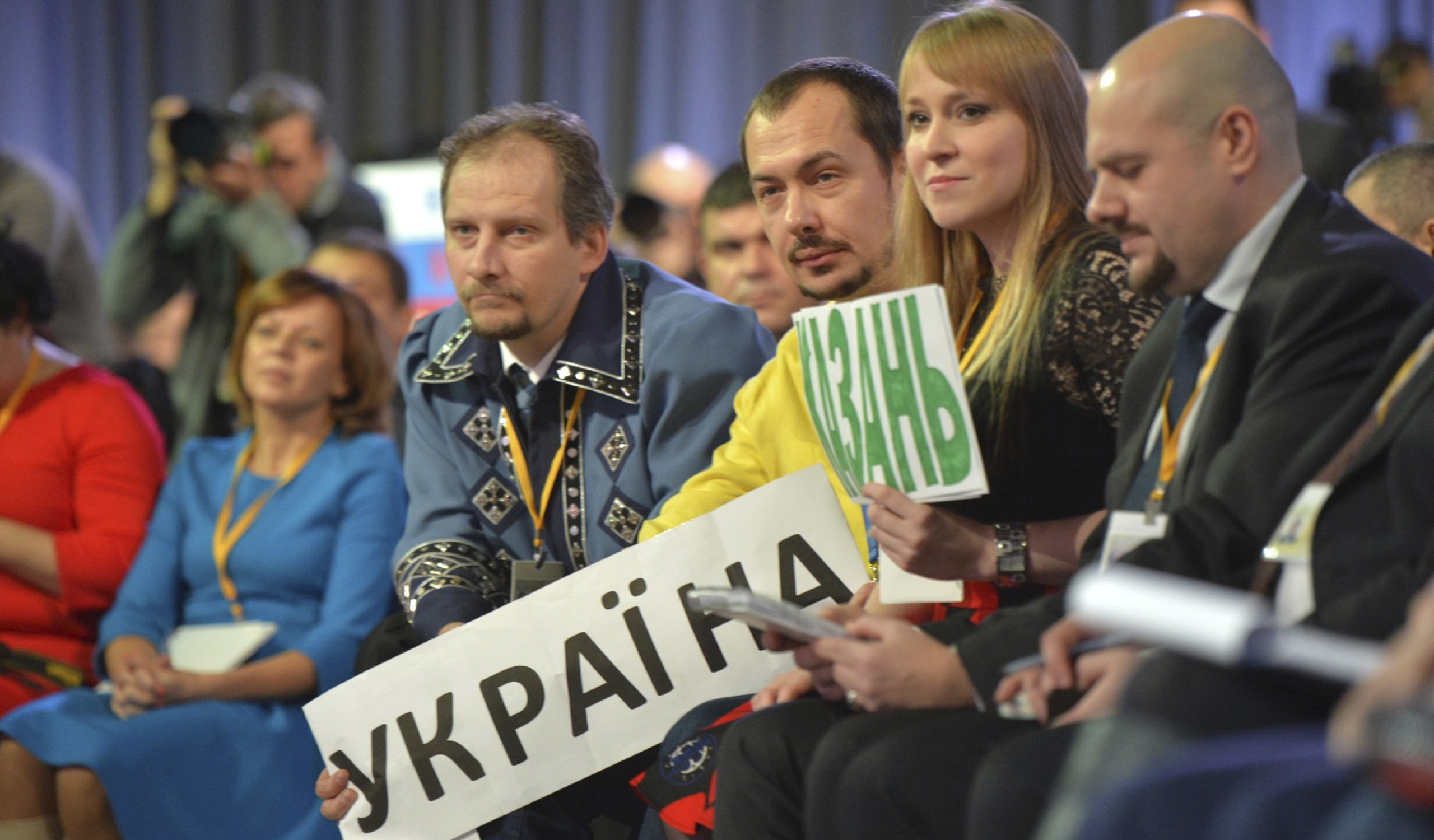 After persistent denials, Russian President Vladimir Putin seemingly admitted to a Russian military presence in Eastern Ukraine (before he didn’t). In any “normal country”, coming clean about a clandestine military operation on live television would have huge political implications. But in Russia, it didn’t even make the evening news.

It all started on December 17 during Putin’s annual marathon Q&A session, a PR exercise in which he vacillates between his roles as global statesman and provincial Santa Claus.

Putin faced many queries, some serious, some prosaic. Due to Russia’s economic woes, his usual air of confidence was punctuated by more bluster than usual. This was especially true when questioned over recent corruption allegations leveled at the family of Prosecutor General Yuri Chaika.

But from Chaika’s alleged mob ties to a quasi-admission that Katerina Tikhonova was in fact his daughter (because only in Russia is the identity of one’s children a matter of state security), it was his answer to a question about Yevgeny Yerofeyev and Alexander Alexandrov, two alleged officers of the Russian military’s Main Intelligence Directorate (GRU) captured during fighting in East Ukraine, that gave pause to many watching the proceedings.

“We never said there were not people [in Eastern Ukraine] who performed certain tasks, including in the military sphere,” he said. “But that does not mean there are Russian (regular) troops there, feel the difference.”

Putin, of course, has vehemently denied that very thing before. For example, during a June 2014 interview with Radio Europe 1 and TF1 TV channel, Putin accused the United States of lying about Russia’s military presence in Eastern Ukraine.

“Yes, [Washington is lying]. There are no armed forces, no Russian ‘instructors’ in southeastern Ukraine. And there never were any,” he said at the time.

Perhaps recognizing that Putin’s partial admission about Russian military involvement could have serious implications for Moscow, on December 18 presidential spokesman Dmitry Peskov attempted to backtrack on Putin’s comments, saying he had been referring to the long held (and simply ludicrous) assertion that the tens of thousands of Russian troops to have actively taken part in the Ukrainian conflict were all volunteers.

Similar prevarications were common prior to (and after) the annexation of the Crimean peninsula. In March 2014, Putin said the “little green men” who had occupied Crimea were in fact local militias wearing “Russian-style fatigues” which they had bought in military surplus shops.

Just over a month later, Putin then admitted that Russia had been forced to take “unavoidable steps” so that events did not develop as they were “developing in southeast Ukraine.”

He added: ”Of course our troops stood behind Crimea’s self-defense forces.”

The complexity of Putin’s disassembly on this point cannot be understated. In November of that year, Igor Girkin, a “retired” Russian intelligence officer and former leader of Russian-backed forces in Eastern Ukraine, admitted that he had been the “flywheel” for civil war in Eastern Ukraine.

“I was the one who pulled the trigger of this war,” Girkin told the nationalist Russian newspaper Zavtra, or Tomorrow.

Girkin went on to say that if his “units had not crossed the border”, everything would have petered out, as it had in Odessa.

Basically, Putin used Russia’s own clandestine invasion of Eastern Ukraine as an ex post facto justification for seizing Crimea. He lied about invading Crimea, only to later justify that intervention with another Russian invasion which had been branded as a civil war through a targeted propaganda campaign.

Then, a year after the fact, not only did Putin admit that the seizure of Crimea was a Russian military operation, but that Moscow was prepared to put Russia’s nuclear weapons in a state of alert in order to accomplish that goal. This admission was not made inconspicuously. It was shouted from the rooftops during a propaganda filled, pseudo-documentary aired on state television. Moscow repeatedly changed its story before not only the world, but the Russian people. And the Russian people didn’t care at all. The question is why?

The answer, strangely enough, was perfectly articulated by one perspicacious user of the online image sharing site Imgur. With an admittedly crude appropriation of the Kübler-Ross model of grieving/death, the user chose to outline the “five stages of arguing with a Russian nationalist.”

First there are vehement denials, followed by an insistence that there is insufficient proof to back up Western assertions. Second, the rhetoric turns to anger, with claims the West constantly accuses Russia of wrongdoing without being able to meet a near-impossible burden of proof to satisfy Russian apologists.

Next, Russians enter a whataboutist stage of bartering, noting that whatever Russia might or might not have done, it does not compare to any number of actions perpetuated by Western governments over a seemingly infinite timeframe. Then, Russian apologists enter a stage of depression, playing the victim before an increasingly aggressive West.

Finally there is acceptance, whereby Russian apologists not only admit to doing what they had previously denied, but are triumphant in coming clean about their lie.

This model in part helps explains a poll released  by the state-run Interfax news agency in March 2014, which found that 72 percent of Russians believed it is permissible for the media to hold back or otherwise distort information in the national interest.

The reality, in turn, reflects a deeper phenomenon about the act of lying within Russia, and why, for various reasons, it is both permissive and accepted within Russian society.

As trauma specialist Marilyn Murray wrote, “Russia is plagued by lying that ranges from what is deemed as a mild-mannered vranyo (white lies, tall tales) to immoral corruption.”

Murray notes that through the broad acceptance of “lies regarding small things,” people are likely to lie in more important areas, and “accept this offensive behavior in others.”

Lying, of course, is not unique to Russia. But lying as a survival mechanism was rife in the Soviet Union. That phenomenon, in turn, was likely a continuation of the serf-master relationship which dominated Russia, particularly after legal amendments in 1649 and 1658 made the bulk of Russians slaves in all but name. Vastly unequal societies where rights are predicated on power, and not the rule of law, will always create complicated relationships with truth telling. There is rarely truth in forced obsequious.

A society built on lying and psychological compartmentalization, in turn, has resulted in the “feast of simulations” which, Peter Pomerantsev argues, frames Russian reality today.

It also creates a paradox. Many Russians are quick to discount everything through their triumphant cynicism, while at the same time projecting outright certainly that they in fact know how the world really works. They write off all mediums of disseminating information as being corrupted, accept that the media can (and should) lie to them, and yet, at the same time, are positive that their interpretation of reality is the right one. And what underpins this correct interpretation?

Crudely put, in the “graveyard of ideologies”, for many Russians, a simple rule of thumb has come to define morality of action: “If Russia does it, it is right.”

These beliefs are shored up by Russia’s doctrine of original sin aimed at the West. Everything Russia does, is, prima facie, in self-defense.

This self-serving, and ultimately patho-adolescent worldview creates fundamental problems for attempts to counter Russian propaganda through the creation of, for example, ‘A Transparency International for Disinformation,’ as some have proposed.

Countering small lies in a piecemeal fashion will do nothing to cure the big lie at the heart of modern-day Russia: ‘We are never to blame; we have been eternally wronged.’

In this sense, states lies are no longer lies, but rather a tactic employed in service of the perceived greater good; Russian greatness at all costs. Russia’s greatness in turn, is increasingly defined by revanchism, militarism, its status as a nuclear-weapon state and the ability to project power around the world.

Barring a dramatic shift in worldview, Putin will unlikely be held accountable to anything beyond the needs of great power nationalism, even as Russia continues to decline. Meanwhile, it is this very focus on the abstract greatness, rather than domestic reform, that, in the words of Dmitri Trenin of the Carnegie Moscow Center, will sooner or later “doom [Russia] to a tragic failure as a state.”

Perhaps the truth will set Russia free before that day comes. But if history serves as any sort of guide, people may still be chasing scapegoats even as the Third Rome burns.

Key Narratives In Pro-Kremlin Disinformation Part 1: The Elites Vs The People