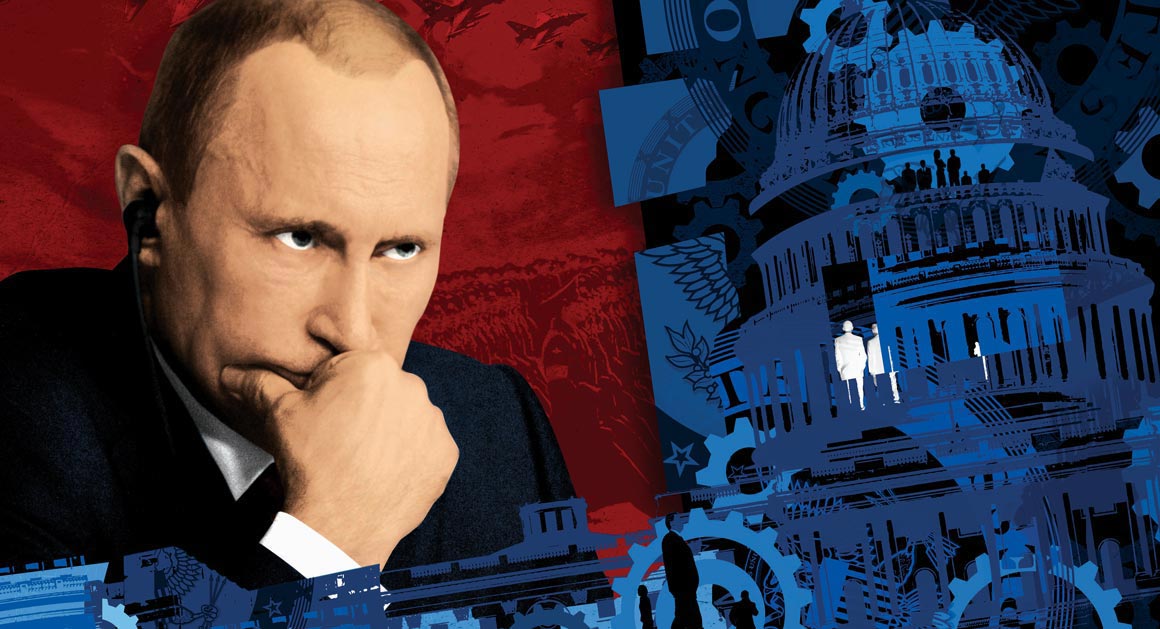 Inside the bar near Union Station, the two men propped their elbows on a table and locked hands. They’d paired off, American versus Russian, congressman from California versus deputy mayor of St. Petersburg. It was the 1990s, not long after the Soviet Union’s collapse, and Dana Rohrabacher squinted across the table at his opponent, a compact Russian with wispy blond hair and hooded blue eyes. The man carried himself with cool poise. Earlier that day, he and two of his colleagues had joined Rohrabacher and a group of right-wingers for a game of touch football. The Russians acquitted themselves well.

The Cold War was over. Hopes for cooperation between former enemies ran high. The Russian delegates had wanted to meet Rohrabacher, a former speechwriter for Ronald Reagan who had helped shape the Reagan Doctrine, which sought to undercut Soviet influence around the world by backing anticommunist guerrillas. Rohrabacher had managed to avoid military service himself during the Vietnam War but often boasted about a Charlie Wilson moment he had in Afghanistan in 1988, when he spent a couple of weeks with a mujahedeen unit near the city of Jalalabad. He claimed to have helped shoot a missile at a Soviet position, taking return fire for his efforts.

He was just the guy to wrassle Russkies in a bar. The group also included Ed Royce, another California Republican congressman who now chairs the House Foreign Affairs Committee, and Jack Wheeler, a professional adventurer and anticommunist activist who had spent time with insurgents around the world. They rolled into Kelly’s Irish Times, an F Street dive that has seen its share of crapulent Washington history. They drank cheap beer. Lots of it. They drank until the inevitable question came up: Who really won the Cold War? Or, as Rohrabacher clarifies today, did the Americans win the Cold War, “or did it just end?” There were many possible ways to decide the question. Arm wrestling was deemed best. So a table was cleared. A crowd drew near. The congressman would take on the deputy mayor.

As Rohrabacher leaned forward and clasped hands with his foe, he soon realized that the diminutive Russian bureaucrat was stronger than he expected.

It was over in an instant. The deputy mayor torqued his shoulder. The congressman went down. With the American’s arm pinned to the table, the Russian smirked. He was, after all, a judo black belt with a lifetime of experience throwing opponents to the ground. He had also done 16 years in the KGB.

Roughly 20 years later, the California Republican still goes a little gooey over Russia’s strongman president. Rohrabacher, who chairs the House Foreign Affairs subcommittee on Europe, Eurasia and emerging threats, has navigated a remarkable arc from self-professed “ultimate cold warrior” to friend of the new, and increasingly grumpy, Russian bear. More than anyone in Congress, he has become a reliable defender of the Russian point of view, whether it has to do with NATO expansion (“not thoughtful in creating a better relationship with our former enemy”), the inadvisability of economic sanctions (“instead of doing it that way, we should be making an all-out effort to create dialogue”) or the current hostilities in Ukraine, which Rohrabacher says were precipitated at least in part by Western meddling (“I don’t think we should blame all this on Russia”).

It might be a fringe stance, but Rohrabacher is consistent if not compelling to a Washington audience that is dubious about Putin but unsure just what to do about him. In a way, it’s the same gospel of detente Henry Kissinger has been preaching since Nixon: The United States needs to deal with Russia and try to find common ground. Russia’s voice needs to be heard.

“I think if we had areas of better cooperation with Russia, we could have averted a relationship that is now on the rocks,” says Rohrabacher, who nods to Putin’s “many flaws” but also thinks the United States “should not be trying to antagonize him.” “Over the years we have minimized the areas of cooperation and maximized efforts on things that could be viewed as belligerent by Russia,” he says.

This is as good as it gets for Vladimir Putin in today’s Washington. At a time of worsening tensions, escalating sanctions and a crashing Moscow market, when, more than ever, the Russian leader could stand to have a few friends in the American capital, his old arm-wrasslin’ buddy, a man viewed by many as colorfully erratic, may be the best ally he has.

Or he may be the only one. To Putin and his embattled regime, that’s increasingly how it looks. Amid December’s Russian ruble collapse, Foreign Minister Sergei Lavrov openly blamed Washington for his country’s troubles, saying there were “very serious reasons to believe” that the United States is pursuing a regime change strategy to topple Putin—aided and abetted by Rohrabacher’s colleagues on Capitol Hill. “If you look at the U.S. Congress,” Lavrov said, “eighty percent of them have never left the USA, so I’m not surprised about Russophobia in Congress.”

Russophobia, indeed. To the extent Russia has any friends other than Rohrabacher in Washington today, they are for the most part officially paid for—a slew of slick and ineffective PR people and lobbyists who have eagerly taken millions of dollars from Russia in recent years to help burnish its image. Ketchum, the giant PR agency on the Russia account, has earned more than $60 million from the Kremlin over the past nine years, according to legally required disclosures. And for what? Russia is viewed less favorably today than in 2006, when its relationship with Ketchum began. In the 2012 presidential campaign, Americans shrugged when Republican nominee Mitt Romney called Russia America’s No. 1 geopolitical problem. And today? A recent CNN poll found that 69 percent of Americans view Russia as a threat.

The flacks and lobbyists have had a difficult assignment, of course: Spin must accord in some measure with reality to be effective. And when a country uses force to reclaim former territories, stamps out dissent at home and does business with banana republic levels of corruption, reality does not allow much in the way of successful spin. One lobbyist who worked for the Russians here—and didn’t want to be named for fear of professional backlash—crudely likened his role to “trying to polish a turd.”

The meetings took place inside the Kremlin, but not the Kremlin of gilded salons and gorgeous frescoes. Publicists from Ketchum got the Soviet-style treatment: smoke-stained hallways with burned-out light bulbs, tiny elevators that couldn’t fit more than a few people, grim guards at checkpoints. Still, the trips to Moscow were exciting. Ketchum had access to the highest levels of government through its contact and patron, Dmitry Peskov, Putin’s influential press attaché.

Peskov had handpicked Ketchum to work on the G-8 summit in St. Petersburg in 2006. Russia’s image needed buffing after taking a hit that winter when Gazprom, the massive state-controlled energy company, cut off natural gas to Ukraine. Peskov and other media-savvy members of the Putin administration understood that a Western-style makeover would help. And Ketchum delivered at the G-8, arranging media interviews and recording podcasts, and connecting with American think tanks and officials to show Russia in a more flattering light. Peskov was so pleased that he inked a broader contract for Ketchum to “facilitate dialog [sic] and a relationship between The Russian Federation and representatives of the United States government and media.”

The deal was a coup, even for a big global company. At about $5 million a year, it was “one of Ketchum’s top 10 accounts,” according to a former executive familiar with the Russia portfolio. And the arrangement was lucrative not only for Ketchum. The firm brought in private consultants, one of whom was paid more than $850,000 over five and a half years to court think tanks and seek investment dollars for Russia. Ketchum employees flew business class to Moscow and racked up expenses as they spun up their PR operation: op-eds in major newspapers, “influencer” outreach, a slick new web platform called ModernRussia (now thinkRUSSIA).