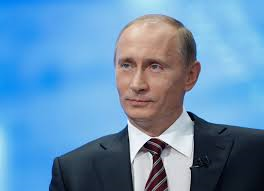 Russia will not be intimidated over its actions in Ukraine and Crimea, President Vladimir Putin said on Saturday as his foreign ministry warned that it was preparing to retaliate against fresh Western sanctions.

Both the European Union and United States adopted tighter restrictions on investments in Crimea this week, while Canada rachetted up its own sanctions directed at Moscow.

Sanctions coupled with tumbling global oil prices have rattled Russia’s economy, with the rouble losing over 40 percent of its value year-to-date and a recession widely expected to take hold next year.

Putin has remained defiant in the face of these setbacks, repeatedly defending Russia’s annexation of Crimea from Ukraine in March and its subsequent support for pro-Russian separatists battling Kiev forces in eastern Ukraine.

Speaking at a concert honoring past and present security service staff, Putin said he had heard people calling for Russia to “pay dearly for its independent position backing compatriots and Crimea… (and) just for the mere fact that we exist”.

“Obviously, no one will succeed in intimidating us, to deter, to isolate Russia,” he said in comments that were shown by state-run Rossiya 24 TV.

Separately, the Russian Foreign Ministry said on Saturday that new Western sanctions against Ukraine’s Crimea region represented a “collective punishment” against residents who had voted overwhelmingly in a referendum last March to join Russia.

“It is sad that the countries which call themselves democratic resort to such methods in the 21st century,” the ministry said in a statement.

“We advise Washington and Ottawa to think about the consequences of such actions. Meanwhile, we will work on retaliatory measures,” he said in comments published on the ministry web site.

Russia retaliated to earlier sanctions by limiting food imports from a range of Western countries.

Kiev and its Western backers accuse Moscow of fanning violence in Ukraine and arming the rebels. Moscow denies the accusations and says it annexed Crimea only after the referendum showed most residents wanted it to become part of Russia.

Earlier on Saturday, in a letter published by the Kremlin, Putin called for Russia’s secret services to be improved to tackle “modern challenges and threats and the emergence of new destabilizing factors”.

The key tasks for Russia’s secret operatives were to fight international terrorism and “any attempts of foreign special services to deal a blow to Russia (and) her political and economic interests,” said Putin, himself a former KGB agent.