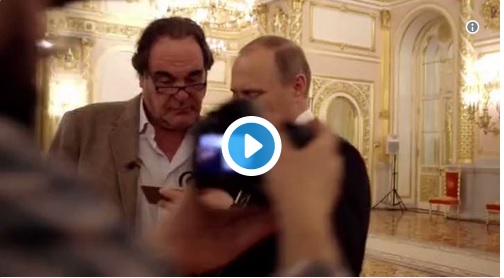 In Oliver Stone’s Showtime special “The Putin Interviews,” there is a scene where the Russian president shows Stone a video on an iPhone supposedly depicting “our aviation at work” in Syria, Putin says.

You can catch a snippet of the video in the teaser trailer for the show’s third installment. The moment occurs at 49 minutes, 10 seconds, into the third episode.

It turns out that Putin actually showed Stone footage of an American Apache helicopter attacking Taliban forces in Afghanistan. The original video first appeared on the website Military.com in 2013.

On YouTube, there is a copy of the American video with pilot chatter in Russian. It’s possible that this was the video Putin showed to Oliver Stone.

Researchers from the Conflict Intelligence Team compared the video played for Stone to frames from the footage of the U.S. Apache helicopter in Afghanistan, and found that they’re a perfect match.