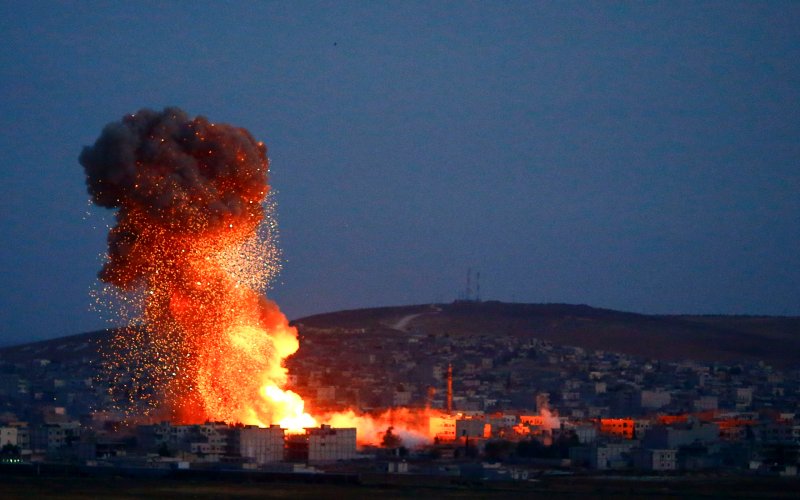 RT ordinarily hates it when outside countries start attacking the Middle East. Except when those countries include Russia.

Russia Today heard about Vladimir Putin’s new airstrikes in Syria. And boy, is the Kremlin-funded television network excited.There are multiple stories on the homepage of RT-America praising Wednesday’s announcement that Russian bombs are now dropping on Syria. One piece even declares that “war on terror is sacred,” in the words of a senior cleric in the Russian Orthodox Church.“Terrorism is immoral and we need to protect those who are being driven from their lands by war,” the cleric, Vsevolod Chaplin, noted.“Whatever they are trying to justify terrorism with, it cannot be justified. Thus, any fight against terrorism is moral, we can even call it a holy fight,” Chaplin told reporters.”

It’s quite a change of pace for RT, which has long decried outside involvement in the Middle East—and blasted those suggesting a buildup of Russian forces in the region.

An op-ed on the site claims that Russia’s efforts in Syria are going to be drastically different than the failed attempts of the United States to deal with ISIS.

“The key difference between the Russian and Western campaigns in Syria is that Moscow has been asked for help Damascus [sic] officially,” unlike the U.S., who “neither waited for the Syrian government to ask for help, nor had a mandate from the UN,” experts say.

In an outright ringing endorsement, the article claims that “Russia has to clear up mess caused by West & its regional allies.”

If that wasn’t enough, another article declares that Putin’s strategy is sound and the perfect way to fight terrorism.

“[Putin] said it was the only proper way to fight terrorism, referring to the US-led coalition, which is bombing IS targets in Syria uninvited and with no mandate from the UN Security Council.”

RT has a prolonged history of criticizing U.S. involvement in the Middle East, claiming that Western presence is the reason why the “monster” ISIS is around. The trumpeting of Russia’s military presence also arrives a few weeks after the very same publication denied reports that Putin was crafting a military buildup in the region as pure hearsay.

“Somebody wants the Saudis and their Arab neighbors to believe that Russia is intensifying its presence in Syria,” journalist Bryan MacDonald wrote on September 7. That possibly explains a hysterical propaganda overload this weekend.

“They seek them here, they seek them there. According to certain elements of the US media, Russian soldiers are everywhere. At this stage, the moon is probably the only place you are safe. Then again, maybe they are readying copy which ‘proves’ that the Russians are hiding on the dark side. Or perhaps even they believe that such an accusation would be a bridge too far.”

The article cited The Daily Beast as one of the primary Western propaganda machines, calling The Beast’s September 1 report on the Russian buildup in Syria a “little slice of fiction.” RT called the author of that story, Michael Weiss, “a New York neocon activist, and a failed Republican Party candidate.”

“Some Russia analysts believe Weiss to be a sinister ‘grey cardinal,’ manipulating chunks of Russia coverage in America. It’s far more likely that he’s a chancer attempting to cash in on the Russophobia so in vogue in US media these days,” the RT story added.

Three weeks later, Russian warplanes were spotted flying over Syria. On Wednesday, the bombing began. So much for fiction.

This should come as no surprise from an outlet whose stilted coverage has caused staff to quit—at times, on air, in the middle of broadcasts.

Take the case of Liz Wahl, a RT anchor who resigned on-air during Russia’s invasion of Ukraine—an invasion the network cheered on.

“I’m very lucky to have grown up here in the United States,” Wahl said during a 2014 broadcast which claimed that Ukraine’s government is filled with fascists and neo-Nazis. “I’m the daughter of a veteran. My partner is a physician at a military base where he sees every day the first-hand accounts of the ultimate prices that people pay for this country. And that is why personally I cannot be part of a network that whitewashes the actions of Putin. I am proud to be an American and believe in disseminating the truth and that is why after this newscast I’m resigning.”

After the story came out, RT’s supporters engaged in semi-veiled anti-Semitic dialogue with reporter James Kirchick, claiming that “this Jew orchestrated the whole spectacle.”

“If you have any comment and if you’d like to respond to me and prove that this is not how it is, you let me know,” a man identifying himself as Kevin Gosztola wrote. “But otherwise we are ready to go. And, you know, you like to ‘fuck with the Russians’ and we’re going to respond to that and let people know where you’re coming from as you have worked with Liz Wahl to expose what you call a propaganda network.”

This kind of talk shouldn’t come a shock from the fans of a network with an illuminati correspondent—one that claims that the CIA invented the Ebola virus and that the 9/11 attacks were an “inside job.”

Don’t be surprise if RT changes its mind about 9/11. After all, RT today is pivoting off of The Daily Beast’s reporting and singing the praises of military actions which they believed to be fake earlier this month.

The site followed up on the publication they think is a “comic” plastering their homepage today with a headline reading “Russian parliament unanimously approves use of military in Syria to fight ISIS.”

The transformation from skeptic to cheerleader is tough to complete but RT has successfully pulled it off in a matter of weeks. Bombs away!

By Gideon Resnick, The Daily Beast