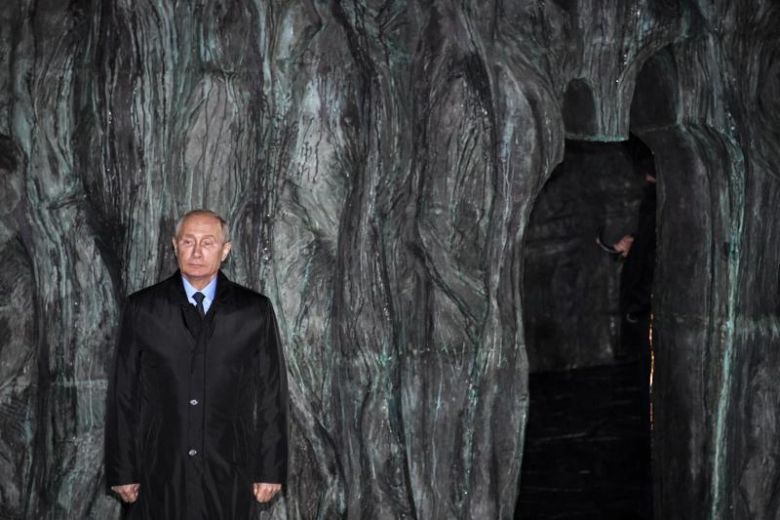 “A memorial is a tribute to the past, but political repression in Russia is not only continuing but growing,” said the letter signed by Soviet-era dissidents and critics of the Kremlin who accused Putin of hypocrisy.

Putin, along with the head of the Russian Orthodox Church, laid flowers at the new monument in Moscow’s center, just several weeks before the centennial of the Russian Revolution.

“This terrible past cannot be erased from the national memory, and it cannot be justified by anything,” Putin said at the ceremony commemorating Russia’s Day of Remembrance of Victims of Political Repressions.

At a different ceremony the previous evening, hundreds of activists gathered in front of Moscow’s former KGB headquarters in an annual event organized by Memorial, Russia’s largest NGO dedicated to documenting Soviet repressions. In December 2016, one of Memorial’s most vocal leaders Yuri Dmitriev was arrested in what activists say was a political smear campaign. In 2012, the Kremlin added Memorial to its list of “foreign agents” receiving funding from abroad, restricting their activity within Russia.

The two events, one organized by the Kremlin the other by Memorial, underscore the chasm between how the state and civil society commemorates the violence of the Soviet regime.

Moscow mayor and Putin supporter Sergey Sobyanin wrote on social media that while he was “mourning for the victims,” he was also against the “denigration of the complex and contradictory history of that [the Stalinist] period.”

During the event organized by Memorial, the names and dates of execution of Soviet-era victims were read out loud throughout the day. Several speakers, including presidential candidate Ksenia Sobchak, demanded the release of Memorial leader Yuri Dmitriev.