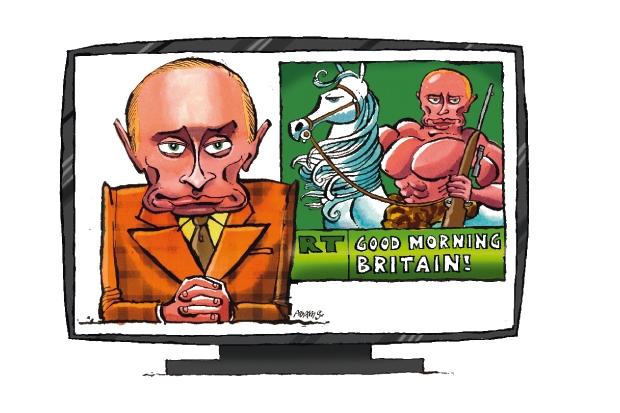 Vladimir Putin’s success in exploiting Western weaknesses — divisions between those who lived under Soviet occupation and those who didn’t and between Europe as a whole as the United States and the unwillingness or inability of the current generation of Western leaders to recognize what the Kremlin leader is doing and stand up to it — is legendary. But the Russian president could not have achieved as much as he has if he had not at the same time exploited the West’s greatest strengths against it.

That strength is the free media, the basis for the Western democracies as Thomas Jefferson pointed out two centuries ago when he said that if he had to choose between a free press and a free Congress, he would always choose a free press because with a free press he would eventually get a free congress but with a free congress, he might not end with a free press. But trends in that media, some old and others very new, mean that a leader who understands what the media can do in his own country and in others is in a position to make use of it in potentially dangerous ways.

Putin clearly understands the power of media in his own country, perhaps better than any current leader of a major country. His own rise to power was made possible by his destruction of media freedom in Russian television, the most important source of news for Russians, by the eclipse of the print media limited by price and used by only a small part of the population, and by the mistaken decisions of Western governments to get out of the game of international broadcasting to Russia rather than shifting from FM stations Moscow could threaten and control to direct-to-home satellite television that he could not.

But he also understands the power of media abroad to promote his agenda, and he has cleverly used three characteristics of that marketplace of ideas to advance his own agenda. First of all, he has not been shy about spending Russian taxpayers’ money to expand Russian radio and television broadcasting to Western countries and to create institutions in Western countries which can be counted on to promote the Kremlin line. Russia Today is only the most infamous of the broadcasters, and the Russian centers in Paris and New York are only the most infamous of the others. They are indeed legion.

Second, Putin understands that the new media environment is, as Thomas Friedman has suggested, flat: With the Internet and social media, there are no gatekeepers, and as a result, anyone can put anything out and expect at least some people to believe it and spread it even if it is an absolute falsehood as many of Putin’s statements are. Sometimes he does this by government-backed trolls, but more often, he can count on those Lenin might have called «useful idiots», people who will support Moscow’s position because it makes them look «independent» and thus «objective». At the very least, those who do can be counted on to get more media time than they would if they didn’t strike such poses.

And third, and most seriously, Putin is taking advantage of a set of attitudes among Western journalists and media moguls that almost guarantee success for his kind of operation. For a long time now, many Western journalists have confused balance with objectivity, believing that they should report all positions on an issue regardless of the evidence for them. That only encourages Moscow to flood the media with its multiple versions of reality, confident that the Western media will pick them up as «part of the story».

Moreover, fewer and fewer Western news organizations can afford to put journalists on the ground in Russia or even more neighboring countries or to invest in the kind of training that produced the great Western Moscow correspondents of a generation ago. Instead, those who do go often fly in and fly out as a crisis ebbs and flows, something that means they are more likely to be influenced by the denizens of English-speaking Moscow than they should be and less likely to do the kind of hard journalistic work of actually covering events on the ground. As someone has said, «it is possible to cover Israel from Damascus, but it would be wrong». Unfortunately, no one has suggested the same about Western coverage of Ukraine from Moscow or from London.

And finally, there is Putin’s ace in the hole in this game: He knows that it is virtually impossible for anyone to discuss Russian exploitation of Western media without Western journalists immediately seeing this as representing a new «McCarthyism». As a result, what Putin is doing is likely to continue for some time to come.

If Putin is not going to change course, what can the West do? Three things are obvious: it must recognize that there is a problem, something many are now afraid to do. It must support counter-propaganda efforts that identify the ways in which Moscow is using Western media to mislead the West, using the bright light of publicity to counter this form of hybrid war. And it must launch direct-to-home Russian-language television to Russia and her neighbors, a step that won’t be cheap but that Putin has made necessary.

Those things alone won’t be enough to defeat Putin’s aggression, but they will go a long way to ensure that he is not in a position to continue to exploit unchallenged the West’s greatest strength.