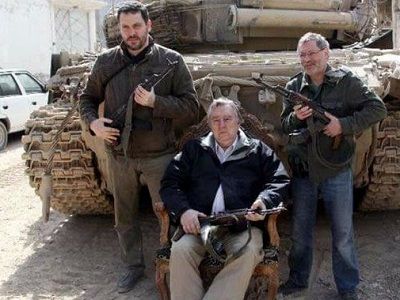 Vladimir Putin’s fascism, the first “post-modern” fascism, is able to include under its banner so many radically different people because it is not an ideology – no basic text could be prepared about it – but rather a set of “understandings” like those which govern criminal subcultures, according to Igor Yakovenko.

The Moscow commentator begins by pointing to the collaboration of three radically different Russian activists – Aleksandr Prokhanov, Mikhail Leontyev, and Maksim Shevchenko – on propaganda in support of Putin’s criminal aggression in Syria. The only thing they share, Yakovenko says, is that they are all fascists (kasparov.ru/material.php?id=596903ED9F970).

Prokhanov, he points out, “is an anti-Semite, an anti-liberal, ‘the last soldier of the empire,’” who longs for the Soviet imperial past and deifies the terrorists of Hamas. Leontyev, in contrast, is a “super-radical liberal,” and Shevchenko “doesn’t like Israel” and considers Hamas “an analogue of Christian democracy.”

All three are fascists, the commentator says. To be sure, this is “the special fascism of a contemporary type – Putinism, the first fascism in post-modern history. It can’t be called an ideology or a philosophy or a religion.” It doesn’t have “a system of views” that could be printed in a book like Mein Kampf or the Short Course.

An analogous book “under the title ‘Putinism’ is impossible because if one tries to find the commonality which unites everything that goes into the term Putinism, one will discover that there is no system of views.” Instead, there is a set of “’understandings’ like those which the criminal world has developed that create a parallel subculture opposed to that of normal people.”

“The ‘understandings’ of Putinist post-modern fascism are organized in trinities: each of which helps the Putinist fascist to correctly arrange his relations with a specific part of the world,” Yakovenko says.

With respect to the outer world, this trinity is “Imperialism-Militarism-Nationalism.” These are the fundamental values of Putinist fascism, the notions that allow its followers to divide everyone into “ours” and “not ours.” And that has some important implications that are often overlooked.

“A Putinist fascist can be simultaneously a Tatar, Chechen or Jewish nationalist. That is his private affair … ‘nationalism as a hobby,’” as it were. But he must subordinate that to “Russian nationalism of the imperial type.” (Other kinds of Russian nationalism are alien and that is why Putinists suppress them.)

As far as the thought processes of Putinist fascists are concerned, they too are based on a trinity: “Irrationalism—Eclecticism—Traditionalism.” That puts their views inside the definition of fascism Umberto Eco offered two decades ago, Yakovenko says. And it too explains the superficial diversity of the Putinist fascists.

“A Putinist fascist can be an atheist or an agnostic, but these personal shortcomings should not … be put on display. That is because, the commentator continues, “the correct fascist of the era of the post-modern must be Orthodox. Otherwise, he is in some ways an incorrect fascist.”

And Putinist fascism defines its relationship to other value systems by yet another trinity: “Anti-Westernism –Anti-Humanism—Anti-Liberalism.” Those come together in this variety of fascism’s homophobia, “in essence, the chief and if you will only clearly defined pretence of Russian fascism to the West” and those who support Western values.

“The homophobia of [Russian] politicians is easy accepted by the mass consciousness of Russians, above all as a result of the deep penetration in this consciousness of the culture of prisons. In a country, where 25 percent of adult males have been behind bars, it could hardly be otherwise.”

According to Yakovenko, “the principle distinguishing characteristic of present-day Russian fascism is that its leader, Vladimir Putin, never declared, never wrote, and never said aloud certain of the dogmas which have just been enumerated.” He is “not the author of the text of a book with the title ‘Putinism’ or ‘Russian Fascism.’”

Instead, the Kremlin leader is “the producer of spectacles in the course of which on the scene under the title ‘Russia and Its Neighbors and Those Further Afield’ are created an atmosphere of fascism and a completely fascist policy is carried out.”

If this process is to be stopped, Yakovenko concludes, then “all thinking people in Russia and in the entire world must understand Putinism is Fascism” and having understood must respond in an “adequate” way.”