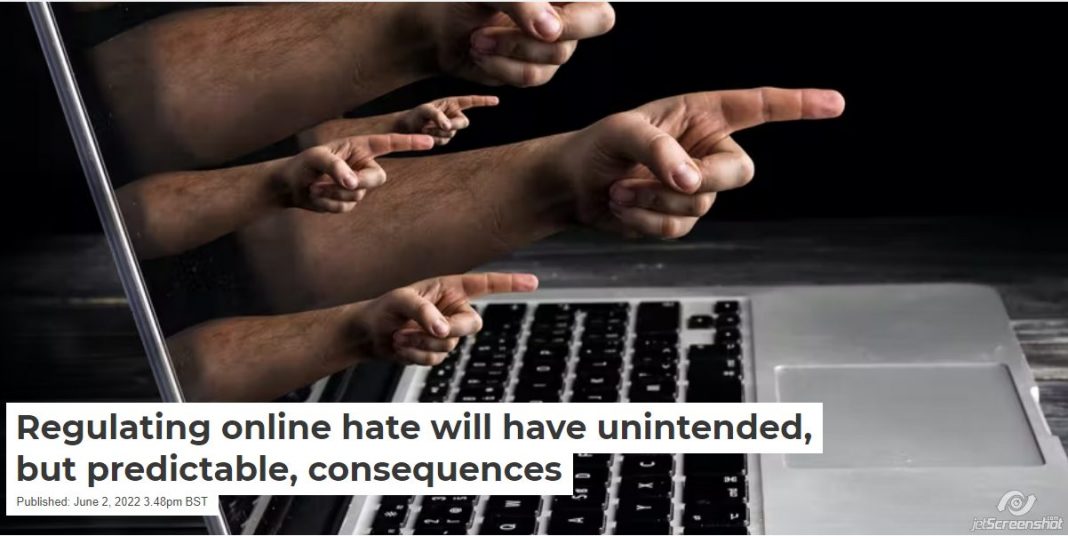 By Garth Davies, Sarah Negrin, for The Conversation

Hate propagated on social media and other online spaces has grown exponentially in the past couple of years, driven to a significant degree by the COVID-19 pandemic.

The occupation of Ottawa earlier this year by the so-called “freedom convoy” also exposed an increasingly worrisome relationship between online and offline environments.

It is difficult to argue against the motivations for the proposed anti-hate bill. At the same time, the discourse around the proposed bill is rapidly becoming fraught. There are serious concerns about the scope and unexamined assumptions of the bill which will result in legislation that is overly broad and unwieldy.

While the perceived imperative to “do something” about hate speech is understandable, the bill runs the very real risk of making things considerably worse.

First, there is danger in using euphemisms such as “de-platforming” and “content moderation,” which circumvent tricky discussions over censorship. We have to be honest about the fact that we are talking about censorship.

Rather than get bogged down by more philosophical concerns, we should instead be concerned about practical ramifications. Specifically, the very real likelihood that attempts to silence particular voices will only succeed in exacerbating the issues we are trying to address.

We must be wary of the law of unintended consequences, which addresses the unforeseen outcomes of legislation and policies.

Overt silencing will only serve to substantiate foundational far-right narratives, which include: “The government is out to get us” and “Our ideas are so dangerous, the government has to suppress them.” This, in turn, further animates and perpetuates the movement.

These attempts also expose the inherent hypocrisy of censorship, which is that it is not censorship if enough people disapprove of the intended target. The far-right will seize upon this sentiment and offer it as further corroboration, and will use it to amplify their calls for fundamental social change.

We must avoiding feeding these narratives.

Second, consideration must be given to the vulnerable groups that are most often the targets of hateful speech. It has been argued, and quite correctly, that particular communities — including visible minorities, Indigenous and LGBTQIA2S+ people, immigrants and refugees — are disproportionately harmed by, and deserve to be shielded from, far-right invective. Unfortunately, the potential dangers for these people by the new bill have received insufficient attention.

Members of vulnerable communities have expressed concern that the bill’s provisions could be used to limit their online freedoms. This fear is grounded in fact, as historically, they have been disproportionately targeted for control by law enforcement. The thorny gap between best-laid plans on one side, and the realities of implementation and enforcement on the other, brings us back around to the law of unintended consequences.Internet scholar Lisa Nakamura describes different types of online racism.

Third, much of the discussion around the bill makes unrealistic assumptions about the capabilities of the tech companies that manage social media platforms. Contrary to popular belief, big tech does not have the capabilities to easily identify and remove specific content. Relying on purely technological solutions massively underestimates — and betrays a worrisome lack of understanding regarding — the difficulties in moderating language.

Considerable research, including work one of the authors (Garth) has conducted with criminologists Richard Frank and Ryan Scrivens, has revealed that the far-right ecosystem is marked by an essentially distinct, coded language that is constantly evolving. This work has similarly highlighted the challenges of trying to identify specifically violent language.

Apart from the fact that they don’t want it, we should be leery of turning over editorial control to private corporations. So far, their efforts have been chequered and may best be described as suspect. Any faith that this could be addressed through an over-reaching legislative framework is woefully misplaced.

This is not an argument for a social media “free-for-all.” It has long been evident that the anything-goes ethos underlying the earliest incarnations of the internet both comically and tragically failed to anticipate the toxic quagmire that it has become. Certain online content must be (and in most cases already is) prohibited, including threatening and promoting violence.

But when we come to efforts to restrict content that could lead to violence, we find ourselves standing on much thinner ice. Of course legislation has a role to play. And yes, tech companies should be part of the discourse aimed at finding solutions.

However, as the past 20 years have demonstrated, we cannot kill or arrest our way out of violent extremism, nor can we moderate or de-platform our way out of it. Hate speech is a social problem that requires social responses. In the interim, we must guard against unintended consequences of attempts to address online hate speech and refrain from feeding far-right narratives.

By Garth Davies, Sarah Negrin, for The Conversation