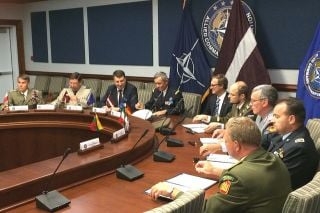 The building on Kalnciema Street 11 in the Riga suburb of Pardaugava has been completely renovated to house the NATO Center of Excellence for Strategic Communications, LETA was informed by the center’s spokeswoman Linda Curika.

Staff members will gradually move into the former Latvian Air Force Headquarters building within the next month.

The center has been in operation since January 2014. At the moment it is located in the Defense Ministry building on Krisjana Valdemara Street in central Riga. EUR 2.7 million was allocated from the national budget to renovate the building for the needs of the NATO Center.

On September 1, 2014, the North Atlantic Council made the decision to accredit the Strategic Communications Center in Riga as a NATO Center of Excellence.

Since the 2009 NATO Summit, the alliance has been working to develop its strategic communication capabilities. No other member of the organization had so far offered to establish a special institution for the work on these matters.

The tasks of the center are to advance the development of the alliance’s strategic communications, as well as providing expertise and support to NATO in this field. The center intends to produce action plans, organize training and take part in NATO exercises. It will offer direct support for member countries and NATO commands in strategic communications disciplines.

The establishment of the center is of vital importance at the time when NATO is enhancing its collective defense capabilities in response to Russia’s aggression against Ukraine. The information war and propaganda launched by Russia has vividly demonstrated that the importance of strategic communications has increased in the age of modern technologies, the Latvian Foreign Ministry points out.