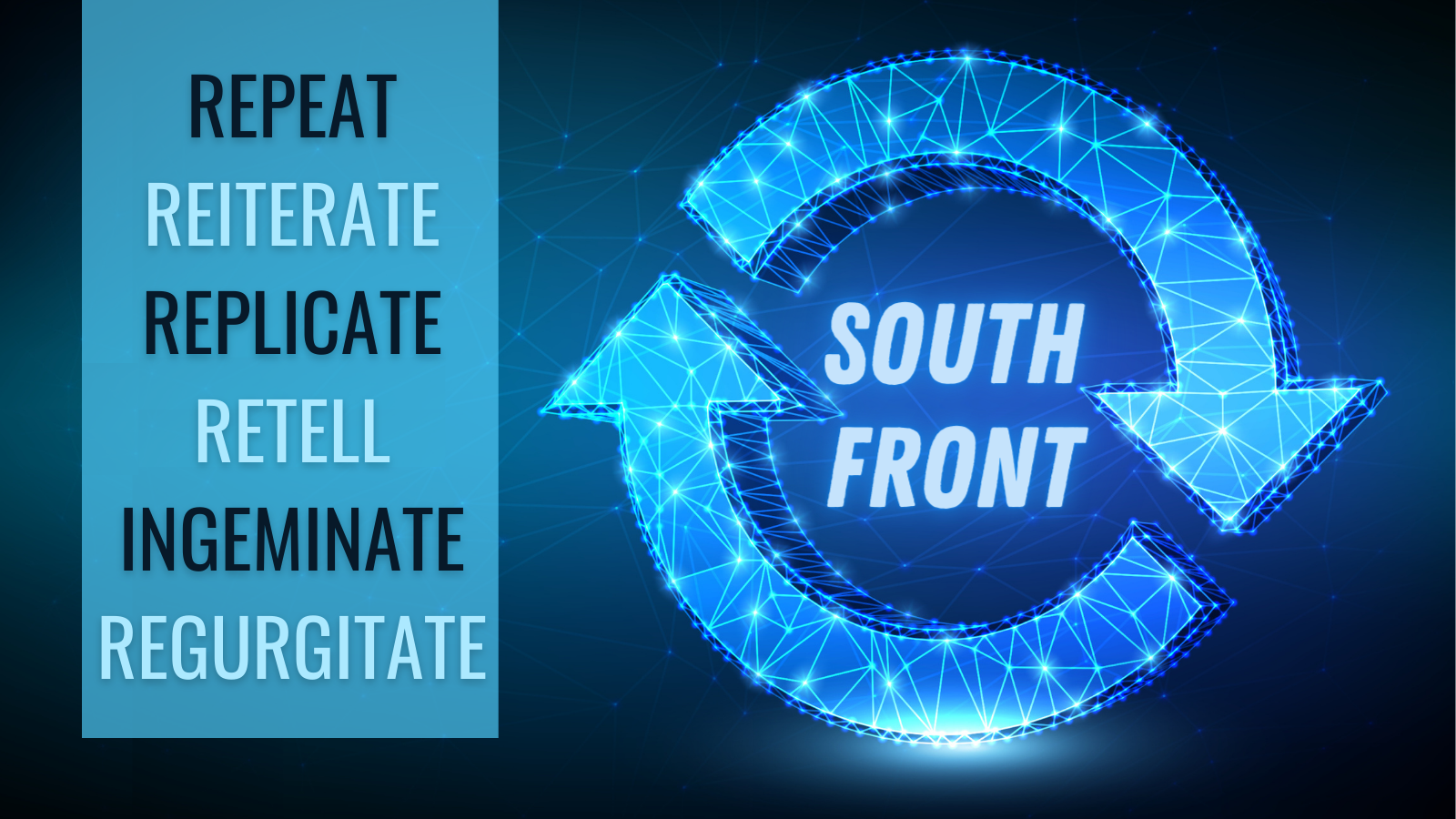 The concept of ”false flag” is deployed as a popular method in pro-Kremlin disinformation outlets. South Front, managed and edited in Russia and perpetually loyal to its masters in Moscow, is passionate about the concept. On 14 October 2020, the site excitedly parroted a statement of the Russian military:

Russian military officials in Syria have warned that Islamic militants in Idlib Governorate have delivered several barrels of chlorine to the White Helmets and appear to be preparing a new false flag provocation.

Exactly the same claim was made in February 2020:

The White Helmets “rescue group”, together with the militants affiliated with Al Qaeda are preparing to stage a chemical attack in Syria’s Idlib province, said the Russian Reconciliation Center, citing a tip from local residents.

Terrorists, who control most of the Syria’s Idlib de-escalation zone, are not giving up on staging false flag attacks using chemical weapons against civilians

International observers have documented frequent chemical attacks by the Kremlin-supported Syrian regime forces. The German NGO GPPi has collected data on 349 confirmed incidents with use of various types of chemical weapons. In almost all the cases, Syrian regime forces can be tied to the attacks.

Pre-emptive lying works best, because it paves the way for more conspiracy theories and impunity if an actual attack subsequently takes place.

The False Flag trope is the go-to method to feed into unfounded conspiracy claims. A search for “False Flag” yields hundreds of hits on the South Front site – Ukrainians, Israelis, Americans, Syrian opposition groups, evil viziers in Trump’s cabinet and the British government. South Front has described the Russian attack on MH17 as a false flag operation, just as it did the GRU poisoning of the Skripals and the attacks on the World Trade Center in New York in 2001.

When in April 2018 a chemical attack was carried out in Douma, Syria, it took South Front merely a few days to establish that it was a thoroughly planned false flag attack.

First, when the attack occurred on 7 April, South Front questioned the source of the information, the  Kuwait News Agency (KUNA):

The pro-militant media outlet (KUNA, ed.) claimed that 15 civilians had been injured with some toxic gas in the area of Douma. However, it was not able to provide any real evidence confirming that the alleged chemical attack had been conducted by the SAA.

This report is another attempt to justify an additional pressure on the Assad government by the international community, particularly the US-led coalition.

Then, two days later, South Front reported that no traces of chemical substances were found. Yet, despite the lack of any traces, by  April 12 South Front had identified the volunteer rescue organisation White Helmets as the executors of the attack.

Finally, on April 16, South Front triumphantly declared British intelligence as the culprits. By the time South Front had published all these allegations, the international team of investigators had themselves barely commenced the investigation of the site. The focus, thereafter, became to continue launching the alarm on possible false flag attacks, while at the same time discrediting independent investigations.

From No Attack to Yes Attack

Over a period of barely more than a week, South Front oscillated between “alleged attack”, “no attack” and “yes there was an attack, but a false flag one”.

The false flag spin became the focus of much of their coverage when the Organisation for the Prohibition of Chemical Weapons (OPCW) investigating team arrived and performed detailed analysis, establishing the facts about the Syrian Armed Forces’ attack in Douma. The established facts are that an aerial chemical warfare attack did take place.

Since then, South Front blamed the false flag on various actors and tried to discredit the OPCW investigation. In one way or another, according to South Front militants, media, OPCW, the Brits, the United States are all involved. For almost two years, the message on the false flag has been repeated, reiterated, replicated, retold, ingeminated – regurgitated. These claims are reprinted by other platforms; no copyright claims.

Regurgitation is the process of some herbivorous mammals – cows, sheep, goats, giraffes, for instance – when food is chewed, swallowed, spewed up and chewed again. And it is the editorial policy of pro-Kremlin media. Repeating a lie is comfortable, but it does not make it true. 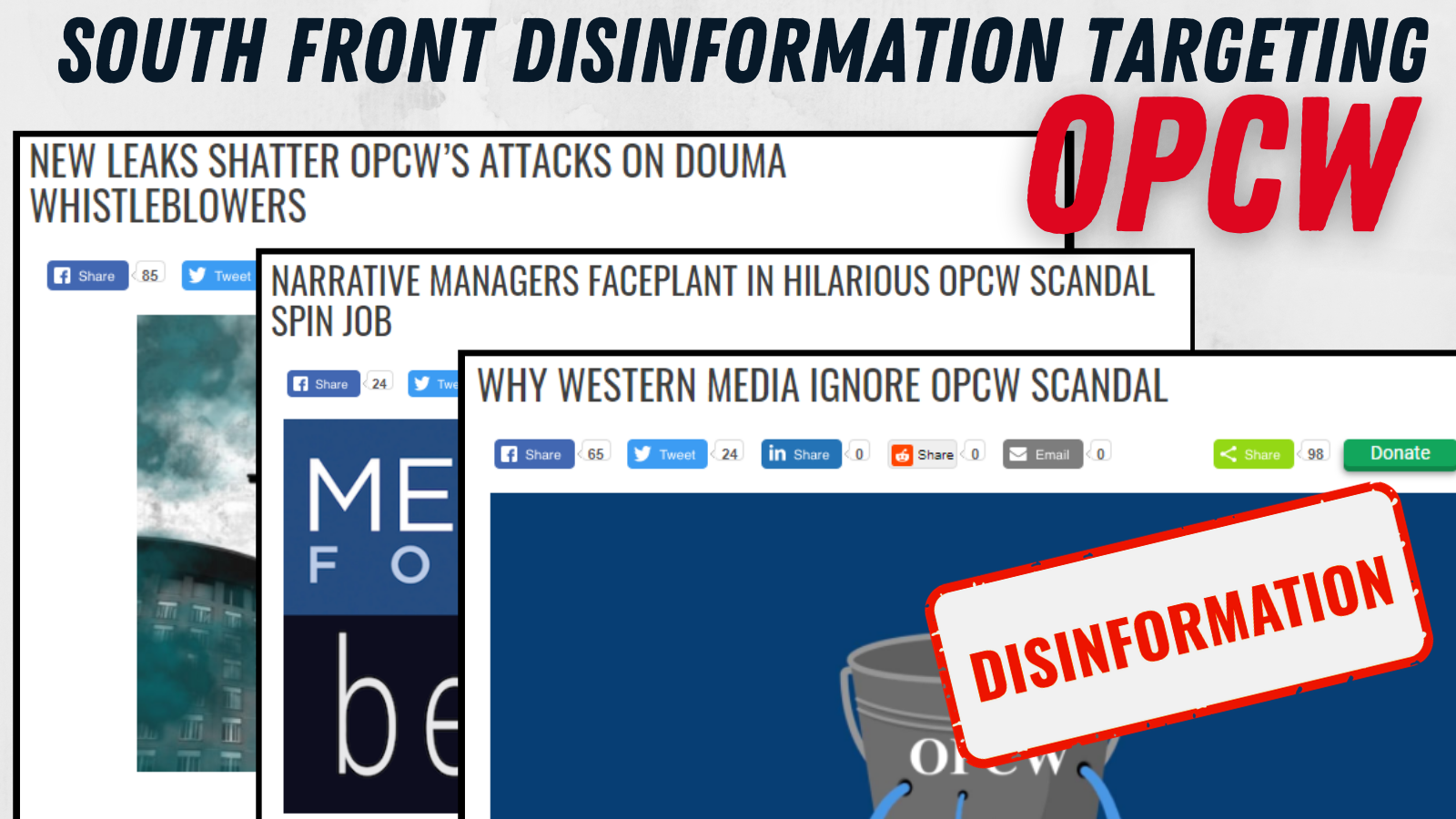