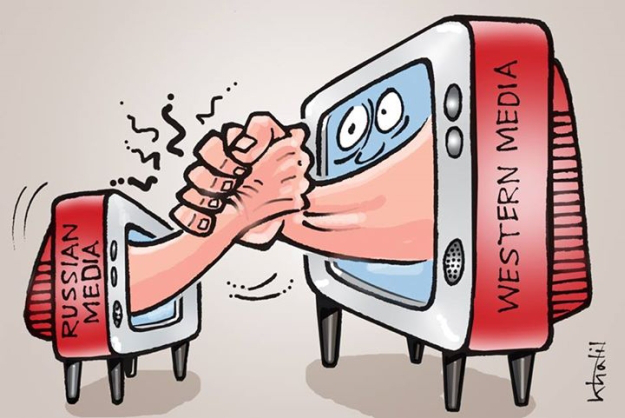 Now in its third year, Russia’s information war has finally hit the front pages of American newspapers. Faced with an overwhelming consensus about the role of Russian intelligence in obtaining and leaking emails from the Democratic National Committee, the American public now recognises Russia’s willingness to interfere in the domestic politics of other countries. To Europeans, however, the war of words waged by the Kremlin is nothing new. Since Russia’s invasion of Crimea, the Putin administration has utilised an arsenal of subversive tools in its effort to undermine E.U. unity, posing a threat that demands an effective counter-strategy.

The most visible of these methods is disinformation outlets, which help disseminate narratives that serve Russia’s strategic interests. Those listening to Kremlin mouthpieces quickly discover that Europe is, at best, morally bankrupt, at worst, on the verge of collapse. Czechs are told that Brussels plans to legalise paedophilia; Hungarians warned that the E.U. seeks to partition Ukraine; the French informed that George Soros is behind the refugee crisis; and English speakers made aware that Sweden represents a ‘terrorist’s paradise.’ Readers of such outlets tend to already be distrustful of their governments and the so-called ‘mainstream media,’ making the Kremlin’s job to exploit, rather than breed, Eurosceptic views. Yet discrediting the E.U. is not an end in itself; instead, it serves to delegitimise accusations of Russian transgressions at home and abroad by purporting E.U. wrongdoings. Russia is no worse, no more deserving of punishment (such as sanctions), and arguably more stable than Europe, propagandists reason to their readers—and there are certainly many of them. The state-funded RT and the state-run Sputnik, Putin’s main mouthpieces, have a combined social media following of over 24.5 million people.

To fully harness Euroscepticism, however, Russia requires more than a mere audience. It requires the loyalty of political actors willing to represent Russian interests in Europe, a role played by many of Europe’s fringe political parties. The most well-known of these is France’s National Front, which received a 9 million euro loan from a Russian bank in 2014 and publically requested an additional 27 million in 2016. The far-right party’s leader, Marine Le Pen, openly speaks of annual visits to Russian statesman Sergei Naryshkin, and has praised Putin as a ‘patriot … defending common values—those of the European civilization.’ Le Pen is not Putin’s only ally, with U.K. Independence Party leader Nigel Farage saying he admires Putin above all other world leaders, Czech President Milos Zeman asserting that ‘there are no Russian troops’ in Ukraine, and Greek Prime Minister Alexis Tsipras repeating Russian claims that Ukraine’s post-revolutionary government is fascist. And there are others still, including a delegation of French deputies who travelled to Crimea in late July using funds from the Russian Peace Foundation, an organisation led by Leonid Slutsky, the First Deputy Chair of the Duma Committee for International Affairs.

Pronounced support for a government explicitly hostile to the mission of the E.U. poses more than just an existential threat. So far, political actors in Italy, France, Greece, Hungary, the Czech Republic, Austria, and Germany have exhibited varying degrees of opposition to continued sanctions on Russia. These even include establishment figures such as the foreign ministers of Germany and Austria, pro-E.U. politicians who have advocated scaling back sanctions over time and in doing so exhibited a willingness to compromise on the E.U.’s core principles.

June saw the E.U. successfully extend sanctions against Russia for an additional six months. However, with economic losses as great as 1.25 billion euros in exports for Italy and projected costs of 100 billion euros and around 2 million jobs for the continent, maintaining unity in an already-fragile union, especially after the Brexit referendum, demands an effective response to Russian subversion. Below are several suggestions for what such a response could involve.

The best antidote to disinformation is the truth. In practice, promoting honest journalism means establishing and supporting centres for journalistic integrity, which educate rising journalists while actively monitoring the press to ensure that falsehoods are not published with impunity. Empowering organisations such as the U.K.’s Ofcom with the power to enforce media standards and penalise outlets that stoke prejudice or mislead audiences creates accountability in a field that has become heavily democratised. However, media monitoring organisations and centres for journalistic integrity can only succeed in democratic political environments; elsewhere, they risk becoming co-opted as means of enforcing a party line.

At present, the preferred counter-strategy for disinformation seems to be silencing pro-Russian outlets, as Latvia did in March and April and Finland appeared to do twice in July. Denying Kremlin mouthpieces the ability to spread disinformation must feel like a triumph. However, it is unsustainable, with the Russian disinformation campaign akin to a hydra—as noted by Intersection Project’s Ivana Smolenova, the Czech Republic and Slovakia alone feature over 100 pro-Russian news sites. Furthermore, shutting down these outlets hands Russia an excuse to respond in kind, denying Russians access to critical sources like Radio Svoboda (which is among the most cited radio stations in Russia) and open source websites like LiveUAmap.

More importantly, it implies that E.U. governments are better equipped to muffle disinformation than to discredit it; that the truth is weaker than the lie. It would be far more effective to follow the examples of the European External Action Service and NATO, both of which have committed considerable resources to strategic communications, creating the Disinformation Review and the NATO StratCom Center of Excellence. These bodies combat misconceptions about their respective organisations, challenging narratives of the Kremlin by fact-checking pro-Russian media and reiterating the truth about topics such as NATO enlargement and the war in Ukraine. Responding to falsehoods head-on instead of silencing them inspires far more confidence in the E.U. citizen, for whom, as stated, pro-Russian sources affirm rather than inspire Eurosceptic views.

Russian support for Eurosceptic parties demands more ambitious measures. E.U. member-states should enact and enforce legislation that imposes greater regulations on the funding of political parties. Though politicians cannot be penalised for making pro-Russian statements or repeating anti-E.U. falsehoods, the financial support they receive from foreign governments – especially hostile foreign governments – ought to be securitised and scrutinised. In the United States, material support of any kind from foreign nationals to political parties is prohibited, and similar laws should be in place in countries targeted by Russia’s information war. Given the emergence of think tanks and NGOs with ties to the Kremlin across the E.U., developing the capabilities to detect and identify domestic actors who may serve as conduits for Russian funding should also be a priority of intelligence services. The European Parliament took the first step towards cracking down on Russian money in European politics when it called for the proposal of relevant legislation in 2015. However, no progress has been made.

In February 2015, Yale scholar Timothy Snyder spoke at University College London, warning that Russia’s hybrid war had more than just Ukraine in its sights: it targeted Europe’s civil society, which is governed by laws and norms that are at odds with the principles of the kleptocratic, corrupt, and opaque system in Putin’s Russia. That much is clear from the tactics outlined above, which attempt to discredit Europe’s press and its political institutions. The E.U.’s response should be firm but bound to the same principles that its member-states espouse: a commitment to freedom of speech and a devotion to liberal democracy. For the E.U., under attack from within and without, no substitute will do.

Lincoln Pigman – student of War Studies at King’s College London and an intern with the New York Times Moscow bureau.