2018 has already seen several clear examples of the ongoing pro-Kremlin disinformation campaign. First came the disinformation surrounding the Skripal poisoning, then the smokescreen designed to hide the facts concerning the chemical attack in Douma, and this week a return to the disinformation accompanying the MH17 disaster.

But something is different from previous years. Action has been taken by Western states, both concerning the disinformation campaigns surrounding these events, and also concerning the actors behind the incidents.

After the attack on the Skripals, 18 EU Member States and 7 other countries ordered the expulsion of dozens of Russian diplomats in solidarity with the UK. And by carefully tracking back the movement of the BUK missile that was used to shoot down flight MH17, the international investigation could finally show that it was a Russian BUK – leading the Dutch and the Australian governments to formally hold Russia accountable, a decision that also gained support from the EU as well as support from the US.

As expected, the pro-Kremlin disinformation campaign focused almost all its efforts on discrediting the meticulous investigation presented last Friday by the Joint Investigation Team into the MH17 tragedy. In doing so, it even raised similarities with the Skripal case, but in the opposite way of how we will describe it, claiming that in neither case had the investigators presented any evidence.

Below we retrace the tracks of the disinformation circulating this week concerning the downing of flight MH17. 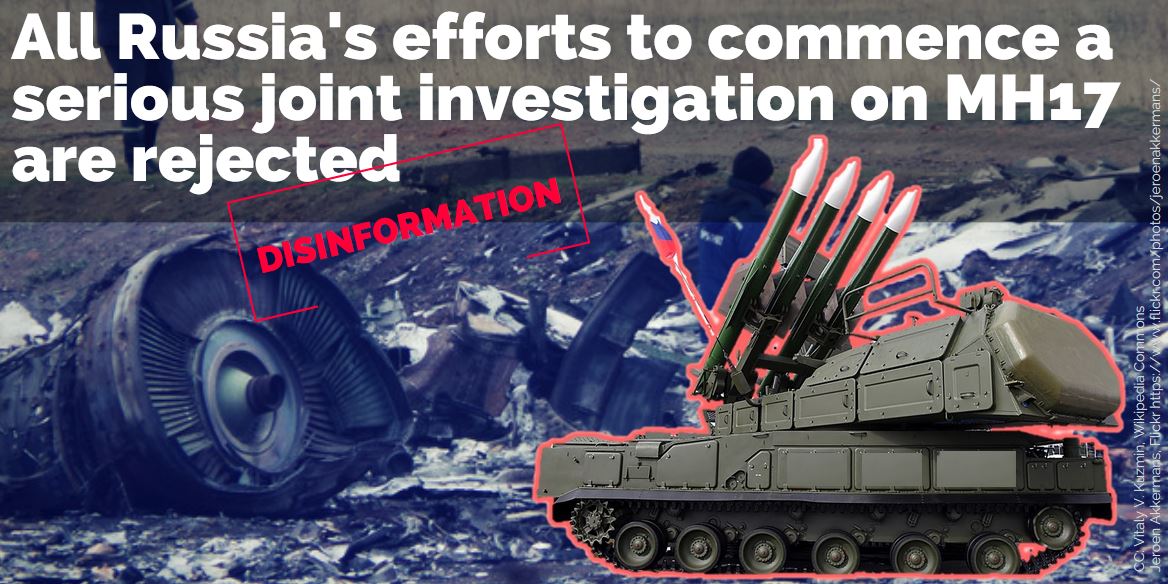 All Russia’s efforts to commence a serious, solid and professional joint work are rejected as a planned provocation

Actually, Russia has presented evidence on several occasions. The trouble with the ”evidence” is that not only is it fabricated, but also incompatible. In fact, the second presentation of ”proof” by the Russian Defence Ministry even debunked their first batch of ”evidence”.

Donbas was a war zone and it was a known war zone, where missiles were operating, entirely capable of shooting down a commercial jet from the sky. Therefore it was the responsibly of whoever controls the air traffic in the region to reroute planes from the Donbas war zone

Well, at that time, the airspace was closed over the area up to 32,000 feet. The commercial flight MH17 was passing the area at 33,000 feet. There was nothing to suggest at the time that the presumed ill-equipped pro-Russian separatists would have access to sophisticated weapons that would be able to shoot down an airplane at that height.

The Dutch commission has hushed up information about where and when the engine of the BUK missile was found, as well as about those who handed it over to the investigators

Actually, following the crash, there was an international outcry over the way the pro-Russian separatists handled the debris site, leaving passengers’ remains exposed to summer heat and allowing untrained volunteers to comb through the area, which led to weeks of delays in the removal of the wreckage.

The Netherlands demand that Russia provide evidence of their guilt

In fact, the Netherlands call on Russia to accept its responsibility and cooperate fully with the process to establish the truth and achieve justice for the victims of flight MH17 and their next of kin.

These accusations against Russia are unfounded rumours/fakes and/or several other explanations are possible (Ukraine did it, it is a NATO campaign against Russia, it is Russophobia)

The investigation has meticulously traced the BUK on its way from Russia and back.  For a full explanation of the findings from the JIT, watch their video.

At the end of the trail, it comes down to this; the BUK that shot down MH17 came from the Russian Armed Forces. It was transported into pro-Russian separatist controlled area by a Russian convoy. There is forensic and visual evidence, and three independent investigations have all come to the same conclusion. Meanwhile, Russia used its veto to block a draft resolution to set up an international tribunal into the MH17 air disaster.