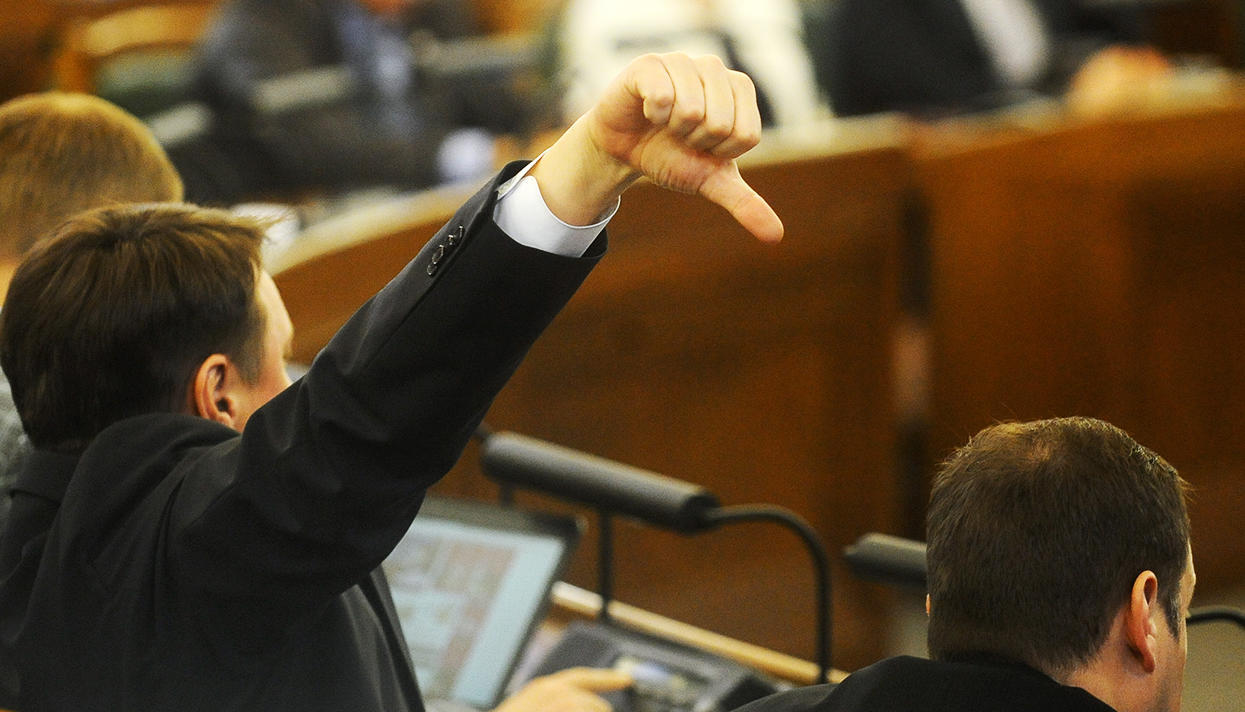 The fight against Russian propaganda has intensified in Latvia, where the authorities have suspended the television network Rossiya-RTR for six months (for inciting war and hatred) and blocked the Latvian domain of Sputnik (for “violating the sanctions regime”). Latvian officials also expelled Graham Phillips, a blogger and former Russia Today reporter who was detained last month for disobeying police at a march of local veterans of Waffen-SS units. Meanwhile, in the Saeima, Latvian lawmakers are debating amendments to the criminal code that are aimed at countering Russia’s so-called “hybrid war” by imposing criminal liability on “information crimes” against the country.

“Any kind of opposition activity is going to be eliminated in Latvia,” political analyst Einars Graudins said recently on Russian network television. Graudins appeared as an expert guest on the program “Special Correspondent,” alongside Rossiya Segodnya chief editor Margarita Simonyan, head of the “Politics” Foundation Vyacheslav Nikonov, and other guests specializing in the “information war” between Russia and the West. On the show, after Simonyan explained how staff members of Sputnik were called in for questioning by Latvia’s “local KGB,” Graudins pulled from his pocket a sheet of paper and began reading off a list of criminal-code amendments Latvian lawmakers have discussed since March 2016.

According to Graudins, Latvia’s new laws make it possible to arrest anyone for aiding a foreign state or organization in actions that could be deemed harmful to Lavtia’s national security. Graudins warned that he might be imprisoned for five years, just for appearing on Russian television.

Back home in Latvia, Graudins has quite the reputation. (Meduza‘s contacts unanimously warned that anything he says needs to be factchecked and verified twice over.) But the legislation Graudins described does exist, and Latvia’s parliament really is trying to expedite its adoption using an accelerated protocol that makes modifications nearly impossible. (Even the president can only sign or reject the legislation, without any option to send it back to the Saeima for revisions.) Unsurprisingly, the law has more than a few critics among the public (and it’s especially controversial with Latvia’s journalists).

On March 2, Latvian lawmakers introduced the controversial amendments to the criminal code. The country’s state security institutions (namely, the Security Police and the Constitution Protection Bureau) spent the better part of 2015 preparing the amendments, in collaboration with various experts and the Saeima’s Committee on Legal Affairs. The legislation was submitted by former Justice Minister Solvita Āboltiņa, who now serves as the chairman of the center-right political party “Unity.”

Supporters say the amendments are designed to protect Latvian national security in a hybrid war. The legislation’s explanatory memorandum notes that Latvia’s laws in this field haven’t been updated since 1999, leaving the country vulnerable in a changing world.

“It’s plenty clear who the ‘enemy’ is,” according to Anatoly Golubov, the chief editor of the Russian-language edition of the Latvian newspaper Delfi. “Russia isn’t mentioned directly in the text of the law, but there’s been a lot of talk about how the need to adopt [these reforms] arose after the events in Ukraine.”

The main concerns about the legislation have to do with its vague language. In their current form, the amendments would impose criminal liability (with a prison sentence of up to five years) for speaking out against the independence and territorial integrity of Latvia, even in the context of nonviolence.

In theory, anyone could be convicted of breaking this law even for entirely harmless statements. For example, you could go to prison for years, just for saying Latvia should become a presidential republic. The amendments also mimic controversial legislation passed recently in Russia that bars groups and individuals from “aiding foreign states,” and imposes criminal liability on persons found to have received classified information illegally, when the data is considered sensitive to Latvia’s national security. Once again, it’s largely unclear what kind of information would fall under this category.

Despite all these concerns, more than two-thirds of the parliament voted to review the amendments according to the Saeima’s expedited protocol.

Golubov says most Latvians understand and embrace the gist of the amendments (expanding the powers of the state security institutions to deal more effectively with national security threats), but the way the legislation has been drafted and the absence of a public discussion inevitably raise certain questions.

“The police agencies are trying to simplify their work by creating a legal framework so they have the ability to act easily, should the need arise,” Golubov says. “You slap the words ‘countering hybrid war’ on something today and you can do just about anything.”

Sanita Jemberga, the director of Re: Baltica (the Baltic Center for Investigative Journalism), agrees with Golubov, saying, “It’s a classic case, where on the one hand you’ve got the security services wanting to acquire more influence, and on the other hand there’s the freedom of speech. The law has been written so broadly that it prohibits demanding completely normal things.”

The legislation’s authors, however, categorically deny that the bill threatens free speech in Latvia. Gaidis Bērziņš, who heads the Saeima’s Committee on Legal Affairs and belongs to one of the parties in Latvia’s ruling coalition, told Meduza that the amendments comply fully with the requirements of the European Commission on Human Rights. The parliament’s speaker, Ināra Mūrniece (whose party is also in Latvia’s ruling coalition), has declared that the amendments are aimed at strengthening the state, not limiting free speech. She calls public opposition to the bill an “organized campaign against criminal law.”

The campaign against the legislation, by all accounts, has been organized at the highest levels of Latvian politics. Soon after the amendments were introduced to the parliament, several members of the ruling coalition came out against the bill, along with President Raimonds Vējonis and Interior Minister Rihards Kozlovskis. The president, moreover, hasn’t minced his words, saying, “Violating the Constitution and free speech does not serve Latvia’s national security interests.” Vējonis says the legislation needs more work, before lawmakers consider sending it to his desk.

Sanita Jemberga says she’s not overly concerned about the behavior of Latvia’s authorities. In her view, state security services around the world act roughly the same: trying to grab power and jurisdiction wherever possible. “And this is why civil society exists—to push back against this appetite,” Jemberga says.

Jemberga’s Russian-speaking colleagues are less optimistic. “Amid the noise of hybrid war, you might not notice how your own country—by tightening the laws related to civil liberties—mirrors the one it’s trying (embarrassingly, awkwardly, and at times hilariously) to defend itself against,” says Olga Proskurova, the chief editor of Latvia’s Russian-language television station LTV7.

Both Proskurova and Golubov agree that opposition in Latvia to the Russian media has been growing, but none of the journalists questioned by Meduza said they believe the temporary suspension of Rossiya-RTR or the blocking of Sputnik‘s website are tied to the criminal-code amendments.

In the Saeima, meanwhile, the legislation isn’t getting the fast-track treatment supporters wanted. It was initially assumed that the parliament would approve the amendments by late March, but that vote has been postponed repeatedly. According to Saeima deputy Andrei Yudin, literally every article in the legislation is being revised. Yudin refused to reveal any details about the nature of the revisions, but he did say that the general trend of the changes is to soften the amendments’ wording. In some cases, he says, the revised legislation is actually less restrictive than Latvia’s existing laws and regulations.

“In the first draft, the goal was to enable the state security institutions to work more effectively,” Yudin told Meduza. “Now, after the revisions, I’m afraid they’ll work less effectively than they do today.”

On April 12, the Saeima once again declined to vote on the amendments to the criminal code, postponing any consideration until April 19.

This text was translated from Russian by Kevin Rothrock.