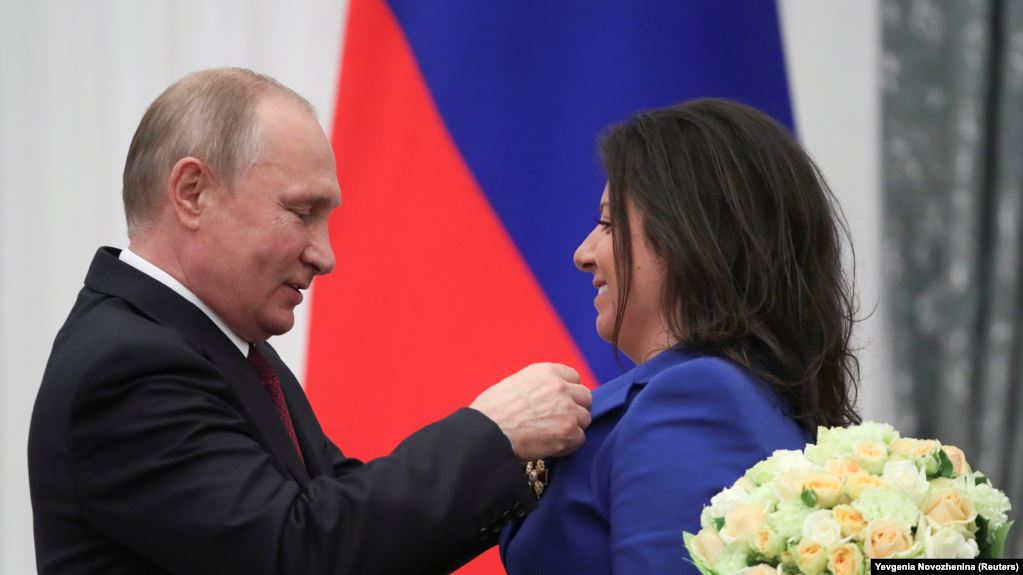 Margarita Simonyan
Chief Editor of RT (Russia Today) and Rossiya Segodnya
“This is how it is today in Iran. The picture of our agency Ruptly. On Fox News, NBC and Bloomberg there is no such picture. More precisely, there is no picture from the protests. As well as [no] mention of the protests themselves.”
Source: Twitter, Jan. 3, 2020
False
Contrary to Simonyan’s claim, Fox News, NBC and Bloomberg – all reported on Iran protests

On Jan. 3 the chief editor of Russia’s state-own media conglomerate Rossiya Segodnya, Margarita Simonyan, tweeted a photo from the RT video platform Ruptly showing a mass protest in Iran over the U.S. killing of Qasem Soleimani, the commander of Iran’s Quds Force.

Simonyan said Fox News, NBC and Bloomberg did not show the protests in Iran or even mention them.

“On Fox News, NBC and Bloomberg there is no such picture. More precisely, there is no picture from the protests. As well as [no] mention of the protests themselves,” she claimed.

That claim is false, and was immediately debunked in the replies to her tweet.

“Question: Why lie even in such trifles? To further discredit yourself?” @Glnvz wrote posting links to the U.S. media reports on the protests in Iran.

@Slavab16 followed with two screenshots showing NBC News and Bloomberg reports. “Everything is in there,” his tweet said.

The flow of debunking replies continued with screenshots and links to Fox News, Bloomberg, NBC and other western media reports.

A Bloomberg.com website search found 99 Soleimani-related reports published on Jan. 3 alone, most of them with video footage of the protests.

For instance, a Bloomberg report titled “Iranians Take to the Streets After Soleimani’s Death” was published at 9:36 AM Eastern Standard Time (EST).

Simonyan’s domain includes the news agencies RIA Novosti and Sputnik, and RT (Russia Today). She has regularly made unsubstantiated claims about U.S. media. In May 2019, Polygraph.info refuted her claim that RT had broadcast a May Day “rally in support of Maduro in Caracas,” with video showing large crowds, while Reuters broadcast video showing a “green boulevard,” with relatively few people. Reuters’ “green boulevard” footage was actually from Paris ahead of mass protests that took place in France’s capital the same day, not Caracas.