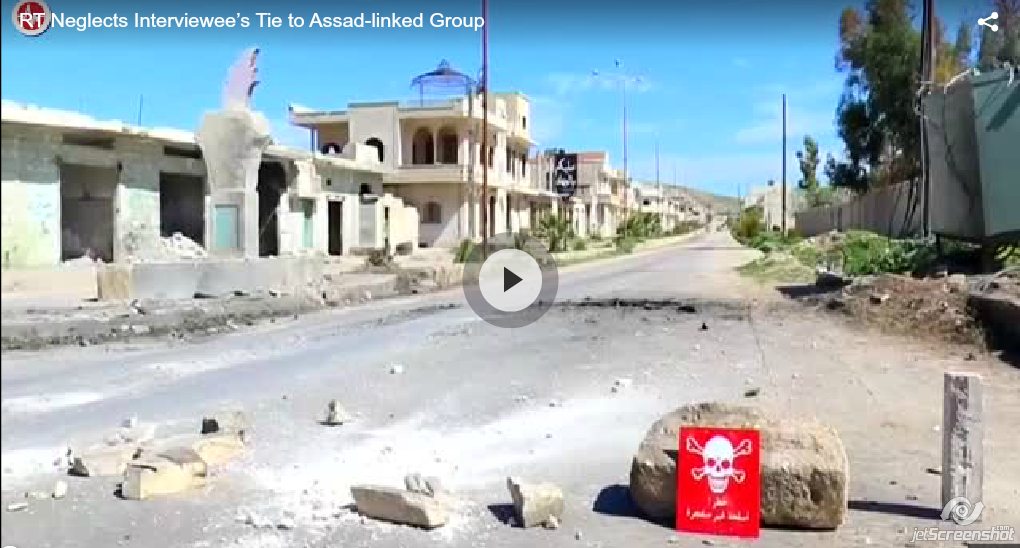 RT (Russia Today)
Russian state-owned media outlet
“John Taylor Holmes, a retired major general who served as a director of special forces, was on a panel of experts which heard testimony from one of the whistleblowers, identified as ‘Alex.’ ”
Source: RT
Jan. 27, 2020
Misleading
Holmes is among directors of a group with ties to the Assad family.

The British general in question was John Taylor Holmes, described by RT as “a retired major general who served as a director of special forces.” According to the article, Holmes sat on a “panel of experts” that heard testimony from so-called “whistleblowers” about the report by the Organization for the Prohibition of Chemical Weapons (OPCW) on the April 7, 2018, chemical attack in Douma, Syria.

In that attack, canisters containing the deadly chemical chlorine were dropped from the air onto the roof of an apartment building in Douma, then under control of the rebel group Jaysh al-Islam (Army of Islam). The group had refused to give up the town to regime forces. One canister broke a hole in the roof and the chlorine, which is heavier than air, flowed down into the building, killing at least 34 civilians.

The “whistleblowers” leaked internal emails and claimed that the OPCW ignored their criticisms in its final report on the Douma chemical attack. Some observers have analyzed and debunked these criticisms of the OPCW, which also released a statement disputing the claims and the “whistleblower” label for the two individuals involved.

Speaking to RT, however, Holmes said the testimony of one of the whistleblowers, identified as “Alex,” was “very convincing.”

“Native English speaker, he was a senior member of the OPCW,” RT quoted Holmes as saying. “He was extremely well-qualified for the job. And I cannot think of a reason why he became a whistleblower other than he felt very strongly that the final report had not reflected the findings.”

While RT portrayed Holmes as a disinterested former general who was convinced by the testimony he heard, the news agency did not mention that he is one of the directors of the British Syrian Society, an organization founded in 2003 to promote better relations between the United Kingdom and Syria. Its founder and co-chairman is Fawaz Akhras, father-in-law of Syrian President Bashar al Assad. Akhras, a London-based cardiologist, was already affiliated with the regime of Bashar’s father, Hafez al-Assad, working as a medical consultant and liaison for top regime officials when they visited the U.K. His wife, Sahar Akhras, formerly worked at the Syrian embassy in London.

In March 2012, The Guardian obtained a cache of emails from Akhras to both his son-and-law and his daughter, advising them on how to deal with the anti-regime protests which had been growing in intensity since 2011. He mainly counseled his son-in-law on how to respond to reports of human rights abuses during the regime’s crackdown on protesters, including video aired on British TV showing the torture of children.

The other co-chairman of the organization is Peter Ford, who served as Britain’s ambassador to Syria from 2003 to 2006. Ford often appears on RT as a guest commentator on Syria and his message is consistently pro-Assad.

Other members of the British Syrian Society have connections to the Assad regime. For example, Director Naji Chaoui is president of the Syrian International Chamber of Commerce and chairman of the board of the Syrian bank Al-Sharq.

Holmes’ affiliation with the British Syrian Society wasn’t the only omission in the RT article. Its headline referred to “outside actors” who allegedly influenced the OPCW. And the article quoted Holmes as saying: “Its (the OPCW’s) value is its independence. It cannot be influenced by outside actors.”

The article doesn’t name any outside actors. Moreover, it fails to mention real examples of an outside actor trying to influence the work of the OPCW: the Russian government.

In October 2017, Russia used its vote in the U.N. Security Council to veto an extension of the OPCW’s Joint Investigative Mechanism (JIM), the mission to investigate chemical attacks in the Syrian war. Earlier that year, the JIM published a report that found the Assad regime responsible for a chemical attack in the town of Khan Sheikhoun.

In addition, four Russians working for the GRU (Russian military intelligence) were arrested last year in The Hague and charged with attempting to hack into the headquarters of the OPCW. The men were found with a car full of electronic devices and laptops, and investigators said the group was collecting information about the OPCW office and surrounding buildings.

The “whistleblower” story was heavily promoted by WikiLeaks and various Russian state media outlets. The story is connected with a series of leaked internal emails between OPCW personnel about the report on the Douma chemical attack.

“Alex,” the first “whistleblower” to emerge, claimed to have been a part of the OPCW’s Fact-Finding Mission (FFM), which was allowed to conduct an investigation into the Douma incident only after regime forces had taken control of the town and after being delayed in Damascus.

The OPCW statement on the scandal appears to confirm that “Alex” was indeed a member of the FFM in Syria. However, it says he was left in Damascus and not allowed to travel to the site of the attack because he lacked the proper training.

The independent investigation site Bellingcat reported that most of the criticisms made by “Alex” concerned not the final report on Douma, but earlier interim reports. Bellingcat noted that when comparing the draft and final reports,the final version appeared to address “many or all of Alex’s points.” The Al-Bab news site also reported on the complaints of “Alex,” pointing out that they confirm evidence of a chlorine attack in Douma.

Ian Henderson, who was identified as the other “whistleblower,” was not a member of the FFM.

Henderson published a report shortly before the release of the FFM’s final report on Douma, mainly disputing the claim that the gas canisters were dropped from the air (a crucial point, given that Syria’s rebels have no air assets). Henderson’s claims were contradicted by three different independent engineering studies commissioned by the OPCW.