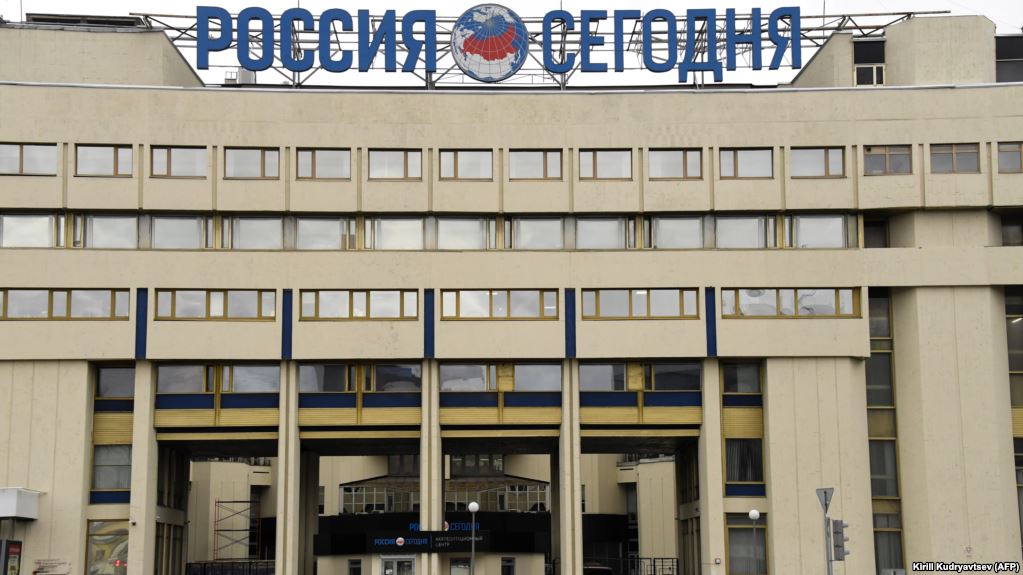 RT-America, the U.S. branch of the Russian international broadcasting conglomerate, registered as a foreign agent under FARA on November 10, fulfilling the demand from U.S. Department of Justice.

RT operates in the U.S. behind a so-called “shell company,” registered in Washington, DC on April 2, 2014, as “T&R Production.” The registration form says T&R Production is a limited liability company “wholly owned” by its sole member and general manager Mikhail V. Solodovnikov, with a $670,000 annual salary.

Under the “foreign principal” section in FARA T&R Production chose, out of three options — government of foreign country; foreign political party; foreign or domestic organization — the third option, naming ANO TV-Novosti as its foreign principal and describing it as an “NGO registered under Russian Federation law.”

Two people are named as fully authorized to act on behalf of ANO TV-Novosti. One is a man unknown to the public named Alexey Lvovich Nikolov – the CEO and a deputy chief editor. His name was added to the registration on April 14, 2017. The second name is familiar to many: RT’s chief editor Margarita Simonovna Simonyan, who, according to the document, is chief editor of RT’s “foreign principal” ANO TV-Novosti as well.

According to Russia’s Federal Taxation Service, ANO TV-Novosti’s registrant and founder is the Federal state unitary enterprise/Russian international information agency “RIA Novosti” – a media corporation listed in the database of Russia’s Federal Agency for State Property Management as “property of the Government of the Russian Federation.”

RIA Novosti itself was registered by two government agencies – the Federal Agency for Press and Mass Communications and the Federal Agency for State Property Management – each of which also owns 50 percent of the company. Under the leadership of the well-known TV host Dmitry Kiselyov, RIA Novosti is in a process of transformation into a new media conglomerate, “MIA Rossia Segodnya,” which includes Russia’s other international broadcaster, Sputnik.

According to the open database of Russian federal government contracts, from the time it was registered in April 2005, ANO TV-Novosti had at least eight government contracts, totaling 216,439,922 rubles (approximately $7.79 million according to April 2005 exchange rates). These included a contract with the Federal state budgetary educational institution of higher learning “The Diplomatic Academy of the Ministry of Foreign Affairs of the Russian Federation.”

The nature of the contracts was described as the “provision of informational services covering the activities of government entities.”

Russian news agencies are expected to reflect a positive image of the Russian government. In April 2017, the Russian Federal Agency for Press and Mass Communications presented its 2016 annual report to President Vladimir Putin.

The report says that the Russian Federal Agency for Press and Mass Communications “exercised the functions of a state client in financing, controlling and supervising the subordinate entities” in accordance with the president’s address to the Russian Federation Council, in which Putin underlined “main directions of the information policy.”

These “directions” included “propagating and promoting the formulation of Russia’s positive image globally.”

On page 12, the report provides details from the budget of the Federal Agency for Press and Mass Communications dedicated to government-owned media in 2016.

The U.S. Department of Justice had given RT until Monday, November 14 to register as a foreign agent or face legal action. RT opposed the requirement and the Committee to Protect Journalists called it “a bad idea…a shift in how the law has been applied in recent decades.

The Russian Justice Ministry followed up with letters to nine media outlets, warning they might be forced to register. Voice of America and Radio Free Europe, as well as the program Current Time and Polygraph’s partner fact check Factograph also were warned.

“The Voice of America is an independent news source required by law to be accurate, objective and comprehensive,” said VOA Director Amanda Bennett. We remain committed to our mission to provide independent and reliable programming to our global audiences.”

VOA is a government owned and run news organization. The journalists work behind a “firewall,” established following a 1994 federal broadcasting act and a charter established in 1976 law.

“The 1994 law prevents government policymakers from interfering in coverage. And the legislation authorized the Broadcasting Board of Governors ensure that VOA journalists comply with the highest standards of broadcast journalism, including accurate and objective news reporting,” said Bennett.