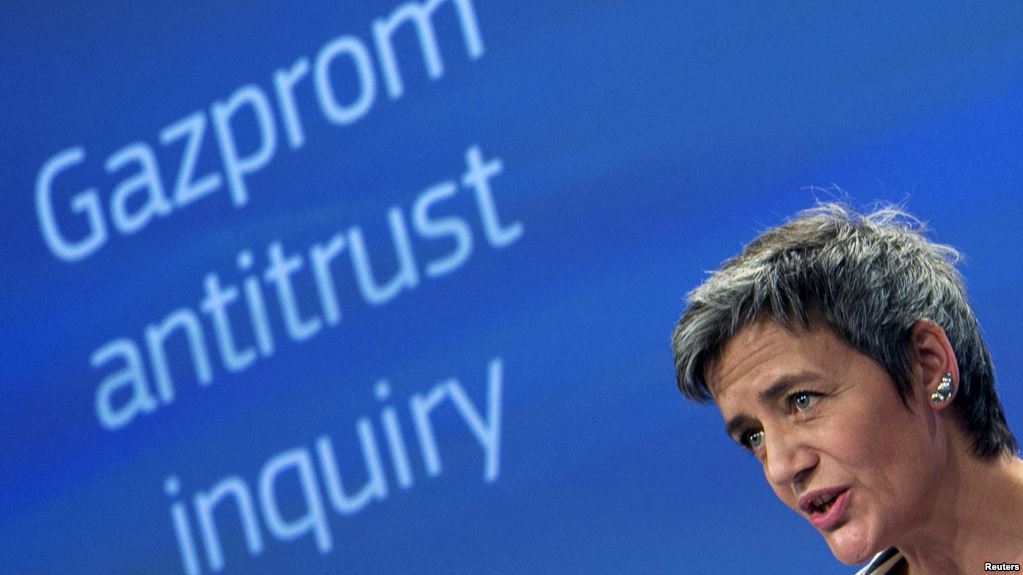 “Brussels surely understands that replacing the Russian pipeline gas with American LNG does not increase, but reduces the energy security of the EU.”

Russian Foreign Minister Sergei Lavrov in late October described the U.S. export of liquefied natural gas (LNG) to the European Union as a “political step” motivated by “Russophobe hysteria” and aimed at “preventing the Russia-EU relations from normalization,” as well as an “unfriendly” act that will “undermine Europe’s energy security.”

Moscow also claims that U.S. sanctions against Russia are part of a struggle for domination of the EU energy market. As reported by the Russian government-funded broadcaster RT, Prime Minister Dmitry Medvedev, commenting on the U.S. sanctions back in September, said that the U.S. was seeking to “bury” Russia’s Nord Stream 2 gas pipeline project and “force-feed” its own LNG to Europe.

Russian media coverage of the issue generally has a similar spin. In a recent example, RT’s website posted an analysis headlined: “How long can Europe survive without Russian gas?”

The RT piece cited a report by Italy’s La Stampa newspaper, but misrepresented it. The La Stampa piece examined possible scenarios and consequences “if new supply problems arise from Russia,” noting that such “blockade crises” occurred in the past, when Gazprom, Russia’s giant natural gas monopoly, left entire countries without gas for a week during bitterly cold winter weather.

However, the thrust of the La Stampa piece was contrary to RT’s claim that “replacing the Russian pipeline gas with American LNG does not increase, but reduces the energy security of the EU.”

What does “energy security” actually mean?

In supplying gas to Europe, Russia has clearly not provided for “the uninterrupted availability of energy sources at an affordable price.” Indeed, it has repeatedly failed to provide for an “uninterrupted availability of supplies” to its European clients, not because of accidents or other circumstances beyond its control, but because it intentionally cut off or significantly reduced gas supplies to Europe in the dead of winter, leaving millions without heat.

Russia has dominated the European energy market for nearly two decades, supplying the continent with more than 34 percent of its entire gas consumption.

During that time, European governments repeatedly accused Russia of systematically abusing its dominant position in the market and using the EU’s dependency on Russian gas supplies as leverage against those Moscow considered political rivals.

Based on these accusations, the European Commission in 2012 initiated an anti-trust case against Gazprom. In announcing the investigation’s preliminary findings in April 2014, the Commission accused Gazprom of “unfair practices,” saying the Russian gas monopoly “had used its commanding position in the region to demand high prices and restrict its captive customers’ ability to secure supplies from other sources.”

Still, the Russian government and Gazprom’s management continue to insist that Russia is “one of the world’s most reliable” suppliers – a claim Polygraph.info previously investigated and debunked.

But is U.S. LNG export really “replacing” Russia on the EU market, and is it “reducing” European energy security?

According to the U.S. Energy Information Administration (EIA), the U.S. exported LNG to Europe in 2017, with three shipments to Portugal, two to Lithuania and Italy and one each to the United Kingdom, Poland and Netherlands. All the shipments totaled 33,915 MMcf (million standard cubic feet), which is less than one percent of Europe’s gas consumption.

The European Union estimates that LNG from providers including the U.S., Norway, United Arab Emirates and Russia could represent 25% of the total EU gas supplies by 2030.

This means, however, that even from a long-term perspective, the U.S. will not become a dominant trader in the EU energy market even if demand for American LNG increases significantly. The “Roadmap of the EU-Russia Energy Cooperation until 2050” plan demonstrates that, despite all the problems, Russia will remain one of Europe’s main natural gas suppliers.

Russia’s projected long-term domination of the European energy market is most likely due to the fact that five major EU companies have been investing in the Nord Stream 2 pipeline project, which is 100 percent owned by Gazprom. Austria’s OMV, France’s Engie, Germany’s Uniper and Wintershall, and Anglo-Dutch Shell together invested 1.43 billion euros ($1.7 billion) in Nord Stream 2 in 2017, and committed to fund up to 10% each of the project’s total estimated cost of 9.5 billion euros ($11.2 billion), if needed.

Therefore, RT’s claim about U.S. LNG “replacing” Russian gas in Europe is exaggerated, if not false.

Contrary to RT’s claim, the U.S. entry into the EU energy market is helping to provide energy security as defined by the IEA, experts say.

“The U.S. LNG is the price setter driving down Gazprom prices,” Anders Aslund, a Senior Fellow in Global Business and Economics at the Atlantic Council, told Polygraph.info.

“The more suppliers you have to choose from the more stable and secure is your position as a consumer. Normally, competition leads to lower prices. I do not understand why the European gas market should be different,” Aleksashenko told Polygraph.info.

According to U.S. government data from 2011, the most expensive natural gas on the international market at that time was from Japan and Russia.

In response to Lithuania’s decision at the end of 2014 to import U.S. LNG, Gazprom offered a 23% discount on pipeline gas supplies. This was evidence that the arrival of U.S. natural gas in the European market is lowering prices, particularly given that Russia does not want to give up its market share. Russia has also recently discounted supplies to Ukraine in an attempt to make its gas exports competitive now that Kyiv can import gas from the West.

The U.S.’s stated goal in entering the EU energy market is to provide Europeans with alternative energy supplies.

In a speech in Warsaw on July 6, U.S. President Donald Trump said: “We are committed to securing your access to alternate sources of energy, so Poland and its neighbors are never again held hostage to a single supplier of energy.”

Speaking at a Warsaw press conference ahead of the G20 summit meeting, Trump stated: “Let me be clear about one crucial point. The United States will never use energy to coerce your nations, and we cannot allow others to do so. You don’t want to have a monopoly or a monopolistic situation.”